When she was 14 years old, Jennell Moody (above) started braiding her neighbors’ hair on the front steps of her mother’s North Philadelphia home.

Word of her skills spread through word of mouth, and Moody eventually turned her hairstyling into a small business, charging $10 for the neighborhood girls to come get their hair done.

“I just kind of picked it up,” Moody said. “As a little girl, I always wanted to make people pretty. That was just always my thing.”

A meeting with a middle school guidance counselor helped push Moody into a career in cosmetology. She honed her craft at the now-closed Edward T. Bok Technical High School in South Philadelphia. During her time there, she competed at hair shows, winning trophies around the country.

After receiving her cosmetology license, Moody worked for several different salons before deciding she wanted to open her own. Her first attempt came seven years ago, at 3rd Street and Girard Avenue in Northern Liberties. 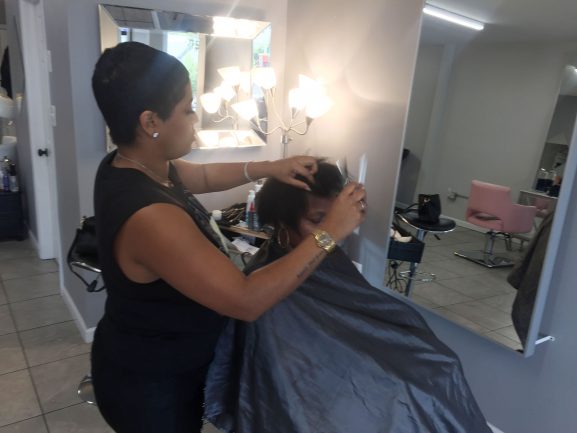 She quickly outgrew the facility, but mismanagement of funds and a lack of experience running her own place forced her to close.

“I didn’t know a lot about the business,” Moody said. “I just thought it was all about doing hair and having clientele.”

Moody, who now lives in Bryn Mawr, was working at Savvy Salon in Cheltenham this January when she decided to give it another go. She had some funds saved and wanted to get back to working in the city.

This time would be different. She was no longer learning on the fly. She had some experience to work off of and contacts who could help her along the way.

Moody signed the lease for the property at 4329 Lancaster Ave. in March, and she opened the salon in May.

“It’s still not done,” Moody said. “I want to do a lot more to it. But it’s comfortable and it’s my vision, so I’m really happy with it.” 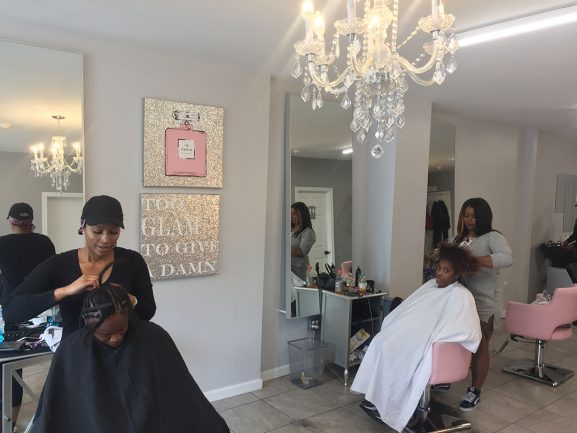 Sisters Dorlisa and Dorlean Haywood were two of Moody’s original customers on her mother’s front steps. They have followed Moody from salon to salon, traveling as far as Delaware to get their hair done.

When the doors to Boujie Babes first opened, they were Moody’s first two customers.

“It started out with finger waves and popcorn waves,” Dorlisa Haywood said. “That’s how far we go back. They don’t even do those anymore. Just seeing her from going into her mom’s kitchen and living room, on the steps. to go from one shop to another shop, to finally where she got her own and she’s doing her thing, I‘m proud of her. Very proud of her.”

Along with Moody’s skill as a stylist, Haywood said she is a people person, which keeps people coming back.

“She’s a perfectionist,” said India Thompson, Moody’s cousin and an employee. “You won’t leave her chair until it’s exactly how she imagined it to look.”

The staff at Boujie Babes is made up of people Moody has met throughout her career. 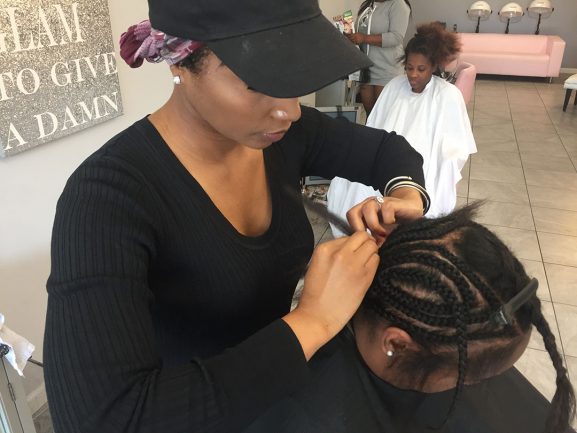 Stylist Lisa Eady (above) met Moody back in 2005 when the two worked together for a hair photoshoot for a magazine. Ever since then, she’s admired Moody’s work from afar.

“I’ve been following her for some time on social media,” Eady said. “We reconnected on social media. I’ve been seeing her journey as she connects with her audience and her followers.”

Stylist Kanitra Scott, who also grew up in North Philadelphia, met Moody about four years ago when Moody was working at a salon in Upper Darby. The two built a friendship while Moody was her stylist. Scott was braiding hair from her house when Moody coaxed her to work at Boujie Babes.

“I knew when she got this, she wasn’t going anywhere,” Scott said. “If she was leaving, then I had to go.” 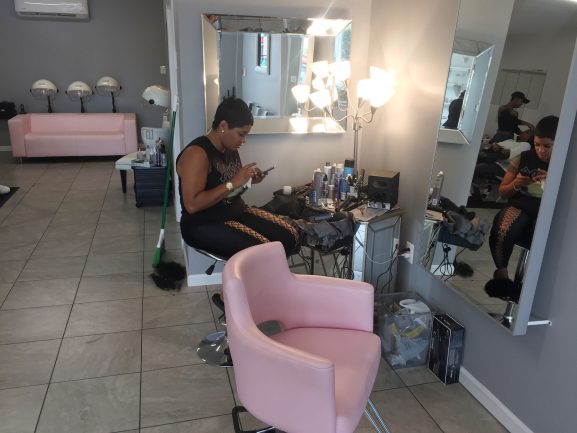 Moody hopes she and her employees can be an inspiration to young girls in the community. She grew up in a single-parent home and is currently a single mother herself, with a 9-year-old and an 11-year-old.

Last summer, Boujie Babes ran a mentoring program where young girls came to the salon and created vision boards for themselves and learned from Moody and her staff about being a business owner.

The Boujie Babes staff has also visited local elementary schools to read to children and has spent time at high schools talking about the possibilities of trade schools and entrepreneurship after graduation.

Thompson has looked up to Moody throughout her life and said she is a strong role model, both professionally and personally.

“She really is inspiring,” Thompson said. “Coming from where I was at a certain time, she kind of pushed me out of my comfort zone into being here and around people, not just business wise but life wise too.”

-Text, images and video by Owen McCue and Lian Parsons.

Powelton Village: Second Friday is No Worse Than First

Most Philadelphians are escaping work and heading to happy hour around 5 p.m. on every second Friday of the month. But in Powelton Village, artists and non-artists alike are probably hitting the streets for their [Read More]

On Saturday, May 21, families, nutritionists and local residents gathered in Woodland Presbyterian Church, located at 401 S. 42nd St., for the third annual Eats and Beats fundraiser, a benefit dinner celebrating the efforts of [Read More]

Walnut Hill: A Love of Reading Has its Perks for Librarian