At first glance, South Philly Bikes may seem like just a typical bike shop. But to Dan Oettinger (pictured above, left), owner for the past three years, his shop is much more.

As the owner, repairman, mechanic and salesman of South Philly Bikes, located at the corner of 13th and Mifflin streets, Oettinger is proud of his store and shares the same feelings about the building’s history, which dates back to 1925.

“Before the shop was called South Philly Bikes we were known as Cycle Sport and before that it was Harry Hounahan’s, which was a bike building shop,” Oettinger said. “The old owners used to manufacture bikes for big races, which is a pretty incredible history of the bike shop.”

“About 10 years ago, we had more of a small community with a few riders here and there,” Oettinger said. “Our shop slowly began to see the biking community grow and grow, and as the years have progressed, I have noticed a full shift in terms of people biking now more than ever.”

Besides seeing more people riding around town, Oettinger and his business have benefited from the increase in bike riding in South Philadelphia.

“Before our shop began to maintenance bikes year-round as we do now, it was also really slow in the winter and the summers were crazy busy,” Oettinger said. “Now we are constantly busy all year long because of the community of riders.”

The shop has become a place where a mother and her teenage son have learned to bond over the simple act of riding their bicycles.

‘I bike once a week for exercise,” Matthews said. “My son Michael bikes just for leisure.”

Matthews loves the thrill of riding through her hometown and enjoys the benefits she has seen from the growing cycling community, both for her health and the bond she has created with Michael.

“Since I have gotten back into biking I have realized just how much fun it is and how much I’ve missed it,” Matthews said. “As Michael and I have begun to ride together more, we have found that we are more connected within our neighborhood when we ride, and it gives us lots of quality time together that we previously didn’t have.” 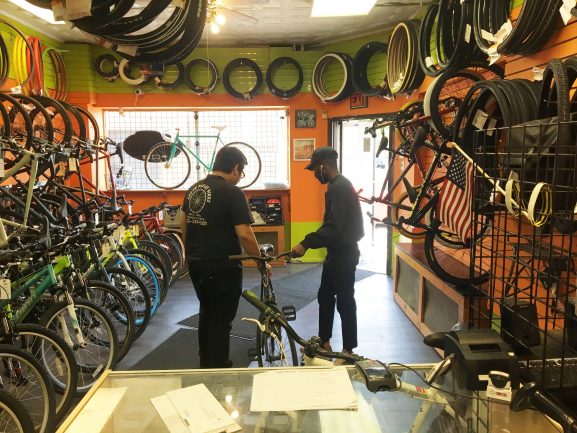 Jackson Tran (pictured above, left) is the manager at South Philly Bikes, working at the shop since the age of 14. Tran’s excitement for the rise in popularity of biking in the city has lifted his expectations for its growth in South Philadelphia.

As bicycling popularity grows, more people steer away from driving and strictly use bikes in everyday life, whether for convenience or the thrill.

“Biking here in the city is extremely invigorating and very fast paced,” Tran said. “All of us here at the shop feel that it’s one of the best ways to get from place to place, which is why we all bike seemingly everywhere we go.”

The time-saving aspect of bicycling in Philadelphia is one thing Oettinger enjoys, as he has almost completely eliminated using his car.

“It is a much easier way of getting around,” Oettinger said. “I can ride from here to Center City in five minutes and it takes a car about 20 minutes. Even in rush hour traffic, biking is extremely easy and efficient to get around in the city.”

Tran views cycling as a way to avoid using public transportation, another efficient way to get around town and one more reason to not have to worry about driving a car.

“Biking is becoming so popular in the area because of its convenience and the ease of transportation, especially with so many lights and stop signs here in South Philly,” Tran said. “The simple cost of owning a bike compared to owning a vehicle has also increased the bicycle usage throughout the city and is easier than dealing with SEPTA or taking an Uber.”

Matthews is hopeful more bicycle shops open in South Philadelphia for the convenience of the bicycling community.

“I really think we need more bike shops in our neighborhood,” Matthews said. “If people have specific problems with their bikes and are unaware of the location of the shops, I guess they’ll just go back to taking the bus.”

But for those commuting by bicycle, South Philly Bikes offers services for the most common bike ailments.

“I would say 80 percent of the time we deal and fix flat tires,” Tran said. “But other than that, we help fix pretty much every type of problem, as the streets of South Philly are pretty harsh on tires which cause wheels to bend all the time.” 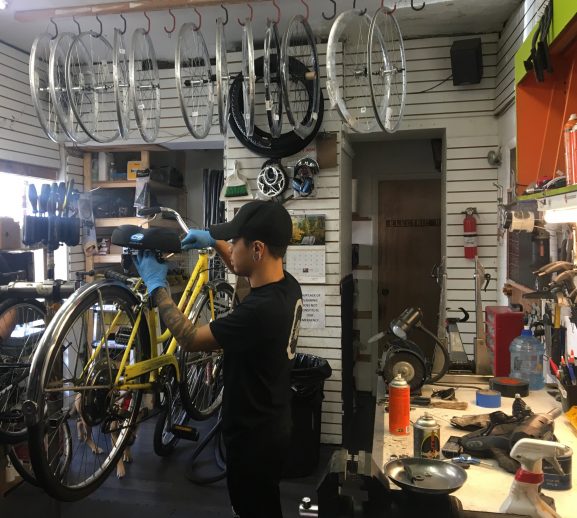 Matthews views its convenience as a major factor in giving the shop her families business.

“We are often here at the shop because of flat tires and I always get so disgusted,” Matthews said. “But thank goodness to this wonderful bike shop that’s in our neighborhood, we always have fast and easy fixes.”

Although Oettinger and Tran admit that cycling in South Philadelphia can include some danger and injuries, both admire the growing passion their customers have for cycling and their affection for their bikes.

“We have seen a few broken arms in a few instances, but nothing too devastating to come back from,” Oettinger said. “And those people have all gotten right back on their bikes. As a matter of fact, we had one diehard customer that actually came here to the shop to get his bike repaired after he got hit before he went to the hospital to get checked out by a doctor.”

Oettinger encourages fellow cyclists and customers to become mindful of their surroundings, while offering a bit of advice.

“As you are riding between the cars you have cars stopped at a red light or at a stop sign, I always tell people to become self-aware,” Oettinger said. “Cyclists need to be smart about what is going on around them and need to focus on getting to where they are going smartly and safely.”

For many, the upside of bicycles outweigh the potential downsides.

“Whether it’s to keep their car in one parking spot to cut down on gas, people are definitely starting to see the benefits,” Oettinger said. “It’s a huge health benefit. The more you ride the more weight you keep off and the healthier you’ll feel. I truly do think the cyclist community will keep growing and growing.”

Along with increasing popularity, bicycle store owners have begun to create a rapport that Oettinger sees as a way to strengthen the entire cycling movement.

“Even more bike shops have popped up since my time around here,” Oettinger said. “Everyone thinks we’re in competition with each other, but we really do help each other out. Whether it’s calling each other for parts or sending customers to each other, we certainly take care of each other. It’s a wonderful and friendly community.”

– Text, images and video by Nydja Hood and Alex Starkman.