Several years ago, April Robinson needed groceries— so she turned to the St. Cyprian Church for a meal.

“A bag of chicken, some canned goods and some noodles, and juice,” Robinson said.

She still remembers the groceries she received in the church’s basement, which has served as a food pantry for well over a decade. Shortly after, Robinson returned the favor: she’s been volunteering at the pantry for the past three years.

On Monday and Wednesday mornings, the basement of St. Cyprian— a spacious stone church on the edge of Cobbs Creek— bustles with activity. This brisk Wednesday in late October was no different.

Residents filtered into the room to fill out forms. Music floated through the room from an old, bulky radio. Volunteers sifted through boxes of Hamburger Helper, cans of diced tomatoes and bags of cookies.

Each week, Robinson keeps the basement clean, checks residents’ paperwork and hands them numbers scribbled on pieces of cardboard so people can receive their food one-by-one, she explained. 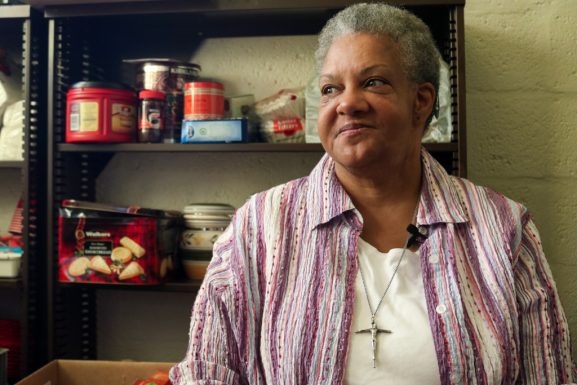 “It’s something to do, and you’re helping other people out,” Robinson said. “And I like that.”

She’s one of a group of volunteers who keep the pantry running smoothly. Together, they serve about 50 families per day, Carla Caple estimates.

Mondays and Wednesdays can be hectic for Caple, who works as the pantry’s director.

Twice a week, she shows up to the church at 8 a.m. after dropping her son off at school. She crafts a grocery list— with foods like ham, spinach and applesauce— to fit the needs of the pantry’s clients.

The amount of food allotted depends on the number of family members— something clients must disclose when they fill out government-issued registration forms.

“We try to make sure that what we’re ordering fits the needs of the area, because a lot of the families have younger children,” Caple said.

With Thanksgiving approaching, the pantry is preparing for its busiest time of the year. Families with three or more members can receive ingredients that could make up a nice meal.

“The full package, from soup and nuts to dessert; of course the turkey, too,” said Director of Parish Services Sister Mary Catherine Chamberlain.

Mornings at the pantry may be busy, but they’re worth it, Caple said.

“This is my church, and I love what we do,” Caple said, who’s also parishioner at St. Cyprian. “And I love the fact that we actually help the neighborhood.”

In Philadelphia, the help is needed: almost one in four residents in the city battle food insecurity. In other words, they “lack access to enough food for an active, healthy life,” as defined by the Coalition Against Hunger.

Chamberlain had never worked at a food pantry before she was transferred to St. Cyprian three years ago.

The experience, she said, has been eye-opening.

“It has really developed in me the sense that there are people who really are struggling in our city,” Chamberlain said. “I know elsewhere, too, but in our city.”

In 2014, around the time Chamberlain came to the food pantry, it was estimated that more than 479, 000 Philadelphia County residents receive Supplemental Nutrition Assistance Program (SNAP) benefits. 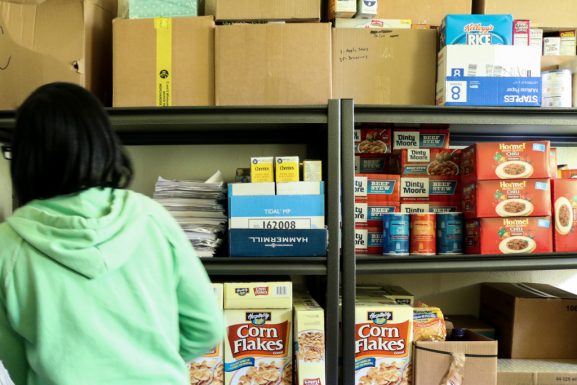 St. Cyprian Church is one of several parishes sprinkled throughout Cobbs Creek that work to combat food insecurity. The Wharton Wesley United Methodist Church and the Grace Tabernacle Church also partner with Philabundance to supply residents with food.

To accomodate the need, the St. Cyprian pantry gathers donations from sister parishes and nonprofit organizations like Philabundance.

That wasn’t always the case, Caple said. She gestured to the pantry itself, filled to the brim with supplies.

“That room that’s over there, it didn’t even have the shelves on it,” Caple said. “We didn’t have as many volunteers, and we weren’t getting food from all different sources…the nun that started it, she was taking her own money.”

When the pantry was first established in the early 2000s, it was nothing more than the work of several Sisters and volunteers. Some founders used personal funds and Shoprite gift cards to scrape together enough money for groceries.

“The place has actually grown over the years,” said Dennis Barnett, who’s been working with the pantry since its establishment.

Barnett, a retired businessman and Cobbs Creek resident, has noticed an increase in clients: he sees both regulars and an influx of “new faces,” he said.

Chamberlain remarked that when clients come in, they greet and thank the volunteers. For her, the gratitude is humbling.

“That builds up a day for a person,” Chamberlain said. “Builds up my day, anyway.”

-Text, images and video by Jasmine Sanders and Angela Gervasi.

There’s a reason why the 21st Ward Baseball League has been around for nearly a century. The children and parents of the community have maintained a certain type of dedication that has kept this league a [Read More]

Manayunk: A Grassroots Gathering for a Good Cause

Destination Schuylkill Project hosted “Hang Out to Help Out,” a green gathering at the Bourbon Blue in Manayunk on Feb. 5, to garner support and funding for its upcoming projects. The group, which facilitates maintenance [Read More]

Recent results from the 2012 PSSA tests show Grade 11 students at Overbrook High School scored an average of about 17 percent on the reading section compared to the national average of 43 percent. The [Read More]