Lawncrest resident Rick Heydt is entering his 11th year coaching in the Fox Chase Roller Hockey league. He currently coaches the Under-16 team, but he previously directed the Under-10 and Under-8 teams as well.

Although Heydt has spent most of his time behind the bench, his love for hockey goes much deeper than coaching.

Heydt grew up in the Hunting Park section of North Philadelphia. When he was young, he played with a group of friends nearly every weekend until the sun went down. Heydt recalls being able to roller skate but he mostly played foot hockey in sneakers.

He cites the National Hockey League’s Philadelphia Flyers as the main reason why he became so enthralled with the sport at such a young age.

“Watching the Flyers growing up, the Broad Street Bullies teams, that got your attention,” Heydt said. “And the rest is history.”

Heydt is now the father of five boys, whose ages range from 13 to 25. All of Heydt’s sons play or have played some form of organized hockey. When he started having children, Heydt wanted them to get comfortable in skates at a young age so he could pass the love of hockey down from one generation to the next.

“It just took off,” Heydt said. “All of us out here together, shooting the puck around, it’s a blessing. I love it. They love it. It’s great.”

When Heydt signed up his third son, Alec Heydt, to play Fox Chase Roller Hockey back in 2007, the idea of coaching surfaced. While helping Alec Heydt, then 6 years old, prepare and practice to play, Heydt was overheard by a few of the parents and coaches. They asked if he would be interested in coaching the team.

Heydt agreed and began to lead the team his son was on.

He’s been coaching ever since.

He currently instructs three of his own kids: Alec (now 17) and 13-year-old twins, Ian and Jordan.

“It’s really nice because it’s always good having your dad teaching you,” Ian Heydt said. “We get to play with him and he gets to play with us. We don’t have much time with him, so it’s good to spend time.”

“It’s pretty good,” Jordan Heydt said. “We usually get a lot of time on the rink and it’s just fun having [our dad] there.” 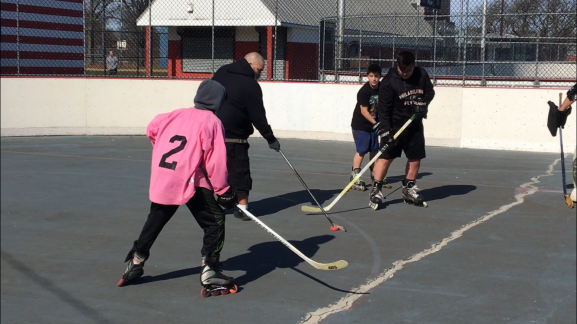 In addition to coaching, Rick Heydt is also a hockey dad for his boys, as Ian, Jordan and Alec Heydt all play for more than one team. The three are also members of the Old York Raiders, an ice hockey team based out of Elkins Park. Alec Heydt also plays ice hockey for Roman Catholic High School, and the oldest Heydt son, Christian Heydt, 25, plays for a men’s league based at Grundy Ice Arena in Bristol.

The Heydt family tries its best to make it to as many of each other’s games as possible. They pile into the family minivan and drive all over Philadelphia and the surrounding suburbs. Some of the teams also travel for tournaments, and in the last year the Heydts took trips to Buffalo, New York and Washington, D.C.

“You have to dedicate a little bit,” Rick Heydt said. “Little bit of money and time. You have to get the time off. But the time you spend with your kids and watching them play kids they’ve never seen, it’s nice. You get to meet a lot of people. It’s a really different level of play than the rinks at the rec centers.” 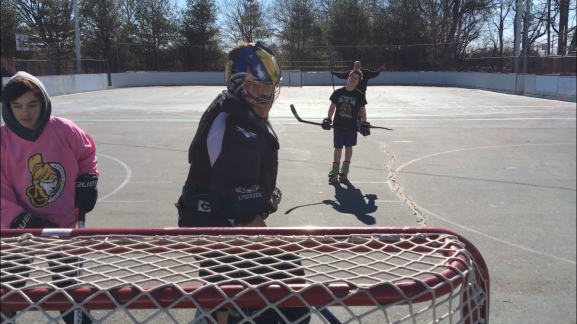 As his kids have grown older, Heydt has had less chances to come together with all of them – let alone go out and play. Between his own job unloading planes at the Philadelphia International Airport and his older sons working, Rick Heydt said it’s a challenge for all of his sons to see each other at one time.

Brendan Heydt, 23, Rick’s second oldest, said it “sucks” they are not able to get together and play as much as they once did, even though they still make an effort to play as a group whenever possible. When those now-rare times occur, Brendan Heydt is usually taking a beating as the goaltender.

“They know where to hit me [with the hockey puck],” Brendan Heydt said. “They have their favorite spots on where to hit me. I love it, that’s the crazy part.”

Rick Heydt said he cherishes every second of his time together with the kids more than before. But he knows the game will always remain in the family.

“I tell them to enjoy these days now because they’ll be gone fast,” Rick Heydt said. 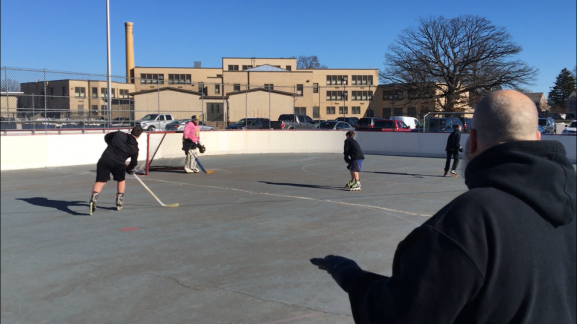 – Text, images and video by Joe Edinger and Tom Hanslin.

Philly Phitness provides not only a space to receive one-on-one training sessions but a place for trainers to establish their businesses by being an alternative to franchised gyms. Perry O’Hearn is the owner of the [continue reading…]

The physical benefits of sports and exercise have long been established. Staying active can help fight disease, improve your immune system and show better character traits to help you develop as a person. But what about [continue reading…]