Since its founding, Chinatown has been ever-changing–from the demographics of the area to its boundaries. Central to this community’s perseverance has been the local churches including the Holy Redeemer Catholic Church and School and the Chinese Christian Church and Center.

In the 1890s Chinatown was a very small section of what we think of today. It sat between Vine and Cherry Streets and stretched just past 9th Street. From there it continued to expand as the immigrant population grew larger. As more people moved into the area so did the interest for establishing a church within Chinatown.

In 1939 Bisop Paul Yupin came to Chinatown and quickly went to work building a flock. By 1941 he had gathered enough members to dedicate the first Chinese Catholic school and church in the country.

“Holy Redeemers was actually one of the factors in developing Chinatown because people start moving here so the kids could go to the Holy Redeemer school because they wanted their children to communicate with other Chinese children,” said Cecilia Moy Yep, a parishioner of the church and a board member of the Philadelphia Chinatown Development Corporation.

At the same time the Holy Redeemer Church was founded, Mitzie Mackenzie was commissioned by a conglomeration of five Protestant denominations to serve the growing Chinatown community. In December of 1941 the Chinese Christian Church and Center was formed, led by Mackenzie.

These religious centers provided a much-needed foundation for the community, according to Harry Leong, director of Chinese Christian Church and Center.

“When I grew up every corner was a bar. There were probably at least ten bars in the community,” he said.

In 1966, the state unveiled a plan that that shook Chinatown to its core: the Vine Street Expressway. The original plans for the expressway called for Holy Redeemer to be completely demolished, with many of the people living in the area being displaced. But, the community fought back.

“One thing that was for sure was that the whole community was against the taking of the church, whether you were Catholic, Protestant, or no religion, everybody came out and protested,” Yep said.

Not only was Holy Redeemer a focal point of worship for the community but it was also where most of the Chinese children went to school. Parents and kids, students and teachers, Catholics and Protestants all came together to help save the church.

Out of this controversy came the Philadelphia Chinatown Development Corporation with Yep being one of its founders. Many people in the community couldn’t speak English and there was a huge language barrier between Chinatown and the government officials. The PCDC was the first organization to have bilingual professionals fight on the community’s behalf and still does to this day.

“The PCDC, in the fight for the Vine Street Expressway, they kind of formed [as] the voice of the community,” Leong said. “The Chinese were more insular, meaning they didn’t reach out to outside of Chinatown. But because of the language they were limited in many ways.”

Eventually, the community got their wish and the plans for the expressway changed. The Chinatown community was able to save the church. It was this that attracted folks like Rev. Laurence Tom of the Chinese Christian Church and Center when he was deciding to switch churches 12 years ago.

“It appeared that this church was very much a part of the community,” he said, “And that’s something I still see today.”

Today, Chinatown is focused on different sorts of issues. It lacks a green space of any kind, with only two playgrounds being those  at Holy Redeemer and the Chinese Christian Church, making it one of the most under served areas in Center City. Chinatown was once a hub for immigrants when they first came to Philadelphia, but now many are moving out into the suburbs because of the lack of affordable housing and gentrification. 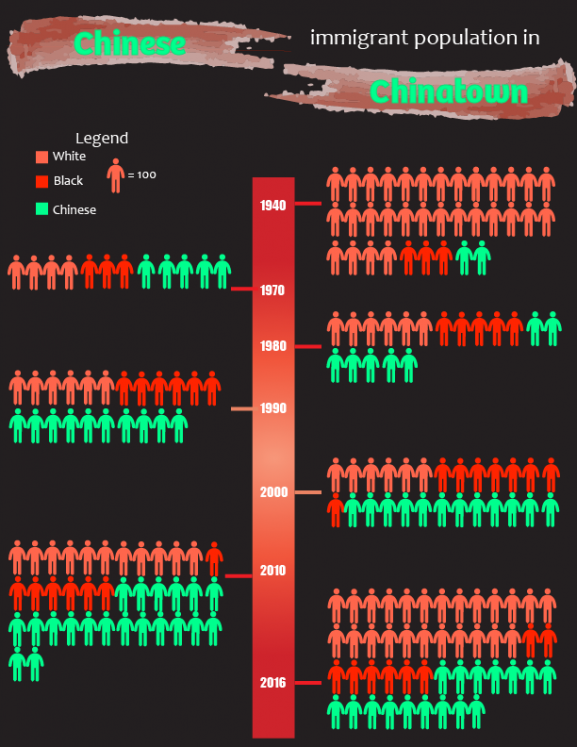 The Philadelphia Chinatown Development Corporation is trying to entice people to move back into the area by building a new community center to replace the old one that shut down in 2007.

And both Holy Redeemer and Chinese Christian Church continue to do their part to serve the needs of the community, even as it changes yet again.

Visitors to the John Heinz National Wildlife Refuge at Tinicum Marsh are greeted by significantly more green than one can expect to see almost anywhere else within city limits. Eschewing concrete and skyscrapers, the refuge [continue reading…]

Since its inception in 1958, The Chestnut Hill Local newspaper has served neighborhoods in the Northwest section of Philadelphia, covering smaller-scale news stories pertaining to the local community, rather than the entire city. “The Chestnut [continue reading…]