The Callowhill Neighborhood Association, which is a non-profit organization founded in 2001 dedicated to improving the area, has a defined boundary for its neighborhood.

There are no Philadelphia Parks and Recreation Department locations within those boundaries. That will change once the first phase of the Rail Park opens in early June, the Center City District, which is doing fundraising, design and construction management for the initial stage, announced in April.

SEPTA currently owns the Reading Viaduct, but the CCD has leased it from the organization while it constructs the first phase, which is a quarter-mile stretch that starts at Broad and Noble streets and ends on Callowhill Street near 12th. Once renovation of the abandoned railroad is completed, the City of Philadelphia will own the park and manage it with the help of the Department of Parks and Recreation, CCD and Friends of the Rail Park, which is a non-profit organization that has worked to bring the Rail Park concept to reality.

“There was really no green space around here, and it’s become more and more apparent to everybody today more than 20 years ago or 30 years ago how important green space is,” McEneaney said. “Everybody should have some kind of park within walking distance, you know, for quality of life.”

The first phase of the park will have a walking path, plants, lounging areas and swings. If all phases can be completed, the park would be three miles long and stretch from 31st Street and Girard Avenue to 9th Street and Fairmount Avenue.

Philadelphia as a whole performs well in some areas when it comes to green space. The Trust for Public Land, a national non-profit organization that advocates for improving and creating neighborhood parks, released its most recent ParkScore report last year. The report ranks how well the 100 largest cities in the United States are meeting residents’ needs for parks by evaluating statistics like the percentage of residents within a 10-minute walk, or half-mile of a park and how many playgrounds are available per 10,000 residents.

Philadelphia tied for 32nd on the list with Henderson, Nevada, and Honolulu. The city, however, measured well in accessibility, receiving a score of 37 out of 40. According to the report, 93 percent of Philadelphians live within a 10-minute walk of a public park. 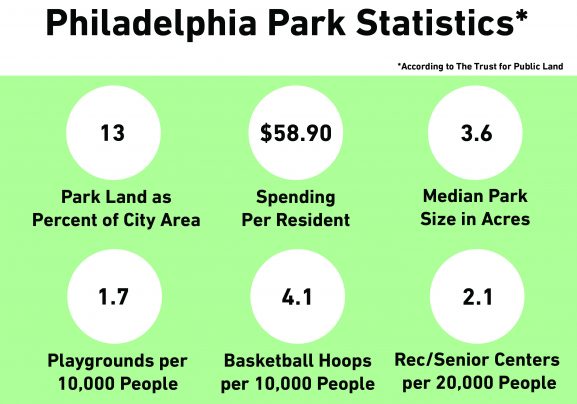 Using the Callowhill Neighborhood Association’s borders of the area, the closest city parks to the neighborhood are the 10th and Lemon Playground and Franklin Square on Race Street between 6th and Franklin.

McEneaney moved to Callowhill in 1979. The area, formerly dominated by industry, is undergoing change, she said, as some vacant buildings are being renovated into offices and apartments. Just across the street from Callowhill’s Broad Street boundary, the former Philadelphia Inquirer building is in the process of becoming the new city police headquarters.

The Center City District Foundation, the charitable arm of the CCD, hopes the Rail Park can be a catalyst “to create a unique, mixed-use, mixed-income neighborhood like none other in Center City.”

The CCD determined that 32 percent of the land near the Reading Viaduct is vacant and undeveloped. In 2011, the city unveiled its Philadelphia2035 initiative, which sets a path to guide neighborhood development for the next 25 years and beyond.

“If you made that crossing, you would see that immediately the built landscape changes,” Yeung said. “Where you have the main commercial corridor, the mixed-use area that comprises the center of Chinatown, it starts to change to a much different landscape that has vacant lots, light industrial uses and former manufacturing buildings, a number of different offices and artist and entertainment venues and then really an immigrant-based community.” 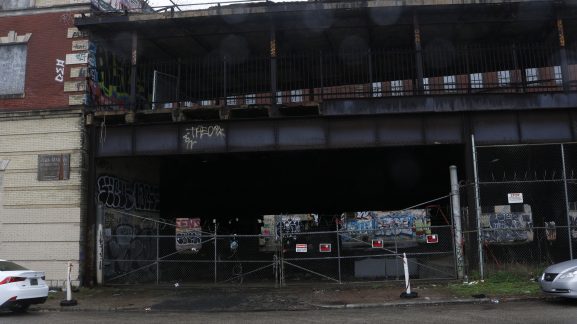 The Rail Park will add an outdoor public park to a neighborhood without one, and it has potential to increase nearby business and development.

“Of course, it’s going to benefit the people like that live in this neighborhood and there is no green space near this neighborhood, but we want it to be a destination park for the whole city,” McEneaney said. “We want everyone to feel like they have ownership of it because eventually the whole three miles, it goes very near a lot of different neighborhoods.”

The Mayor’s Office of Transportation and Utilities has started a parklet pilot program. The parklets are designed to look like mini parks. They are small platforms that extend sidewalks out to the street and replace [continue reading…]

Chinatown resident Anna Perng is an advocate for both immigrant communities and for people with disabilities. Perng, the daughter of Taiwanese immigrants, has been an activist and organizer since her time studying at Swarthmore College, [continue reading…]

Initial planning has begun on measures to address pedestrian and vehicle safety concerns near the Vine Street Expressway, or Interstate-676, in Chinatown. The Delaware Valley Regional Planning Commission, which is the federally designated Metropolitan Planning [continue reading…]