As part of its status of a sanctuary city, Philadelphia’s Office of Immigrant Affairs is a resource that develops programs and policies that attempt to provide opportunity and access to services to immigrant communities.

Orlando Almonte works at the Office of Immigrant Affairs as the language access program manager. Before working for the city, Almonte worked for several nonprofits within the city, as well as Washington D.C.

Almonte works with departments over the city overseeing language efforts, including translation projects for websites or fliers, managing contracts to be put in place for those who need translators on within their workplace, as well as training within communities on translating languages.

”A lot of what our office does throughout the year is reinforcing that we are a very strong welcoming city,” Almonte said. “Philly wants people to feel welcome regardless of what the federal government is doing, and that hasn’t changed. A lot of the stuff we do for language and welcoming communities we did before all the changes at the federal level and they are things we are going to continue to do in the future.”

One of the most impactful things the Office of Immigrant Affairs has offered to immigrant and refugee communities within the city is a language access card. This card lets people know what their rights are, both in English and whatever language they speak.

“We’ve recently redesigned the cards and are rolling them out with 10 to 12 languages, and looking to add 20 to 25 more,” Almonte said. “Just having things like this to reinforce a positive message between the city and these communities is really critical to our job here.” 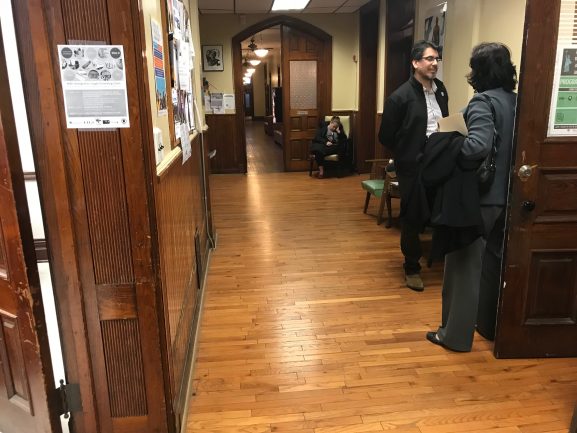 The Office of Immigrant Affairs also organizes flag-raising ceremonies for different communities at city hall, as well organizing events with community groups that educate and work with immigrants and refugees on knowing their rights, job training, and education.

One of these community organizations is Juntos, an organization in South Philadelphia fighting for expanding human rights of immigrants within the city. Miguel Andrade, communications director, makes sure these events happen during times like these with heightened tensions.

“ICE has pretty much-gone rouge right now, so our goal of reaching out to communities to teach them their rights and let them know the laws is really important,” Andrade said. “Many of these deportations happen after the initial incident with the police such as being pulled over for a DUI or car accident, so we want to make sure these citizens know what to do in these scenarios.”

Many of these community events revolve around immigrant and refugees meeting with immigration lawyers, allowing these citizens to have a chance to understand what their case looks like currently, and what to do in case of a possible interaction with law enforcement or ICE.

Sabrina Kim is the daughter of immigrants from Chinese immigrants who brought her parents to a local community event meeting with local immigration attorneys. She has seen first-hand what issues immigrants face in the city, and how important these efforts local government are putting forth in reaching out to them.

“My father owns his own restaurant and the struggle between languages with people of the city, especially when health officials or any other city official came around,” said Kim. “There is a fear that if something goes wrong with one of these encounters, our whole life is changed.

“Even just interacting with other people who live in the city, both my parents have felt a divide because they were lost in conversation, and that’s why I’m happy to hear what the city is doing, especially in the language barrier that faces the city, as it really does go a long way in helping immigrant communities feel more at home.”

In the corner of Snyder Avenue and 8th street in South Philadelphia, Juntos, a local grassroots organization, held a meeting regarding information that angered the local immigration community. A recent report by The National Day [continue reading…]

Immigration: The Welcoming Center For New Pennsylvanians Assists Those New To Philadelphia

The Welcoming Center for New Pennsylvanians is a Philadelphia-based nonprofit that seeks to help those in need, including immigrants and refugees, with improving their lives and socioeconomic status. Philadelphians who are foreign born often find [continue reading…]

Juntos is a community based organization that works to help Latinx immigrants with any issues they might run into here in Philadelphia. [continue reading…]