The first phase of the Rail Park on the former Reading Viaduct in Callowhill is set to open in June at a cost of $10.3 million paid for by contributions from the Commonwealth of Pennsylvania, City of Philadelphia, William Penn Foundation, Knight Foundation, Poor Richard’s Charitable Trust, Friends of the Rail Park and others.

The entire project, which will be completed in phases and could potentially stretch three miles, could encompass three sections. The Tunnel spans from 31st Street and Girard Avenue southeast to a section called The Cut, which is west of Broad Street, below ground and mostly open to the sky.

Continuing east, The Cut would then meet with the first phase, a quarter-mile stretch and 25,000-square-foot park that starts at Broad and Noble streets and runs southeast across 12th Street to Callowhill Street.

Resident John Struble and artist Sarah McEneaney, who has lived in the Callowhill neighborhood since 1979, began advocating for a Philadelphia rail park in 2003 after they attended a presentation about Manhattan’s High Line. Construction began 13 years later, and the opening is imminent.

In February, the Center City District announced the opening would have to be delayed a few months because of concerns about a 130-year-old bridge at 13th Street that is going to be the main pedestrian entrance. Rather than replacing the bridge, it will be renovated. 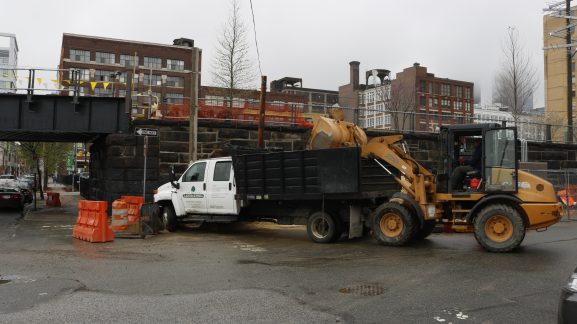 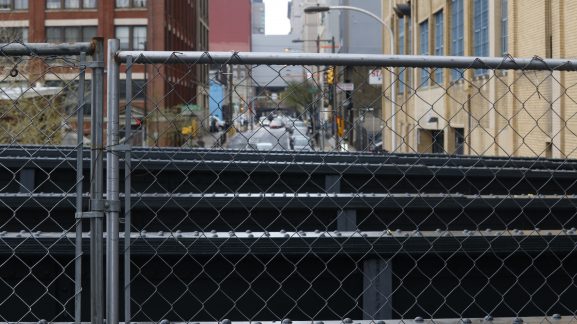 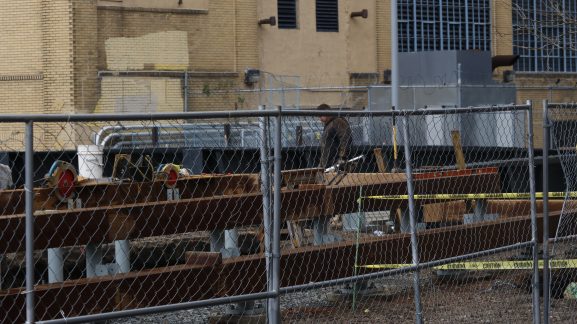 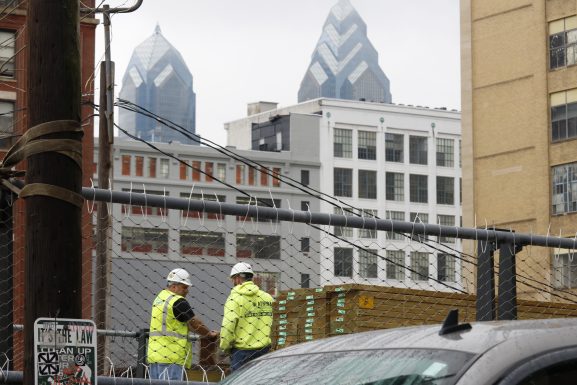 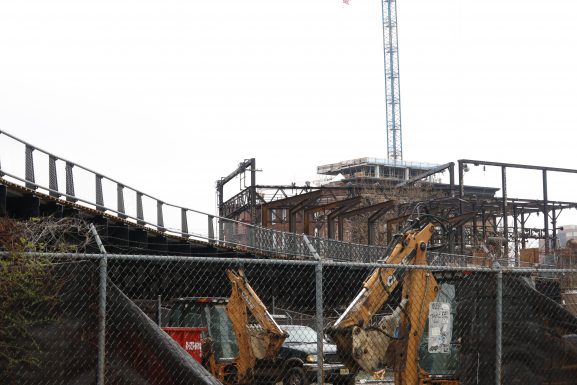 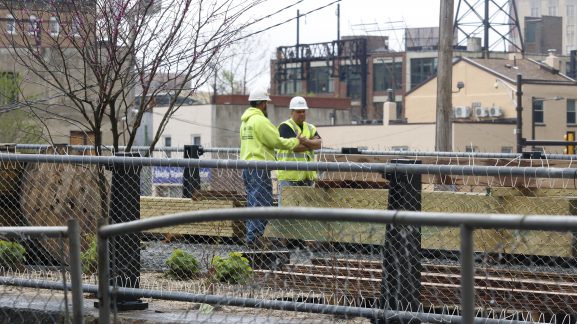 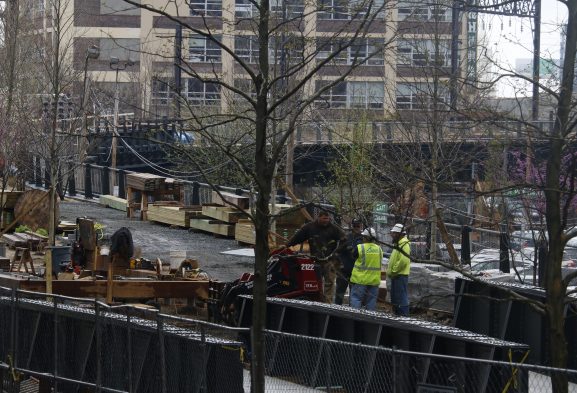 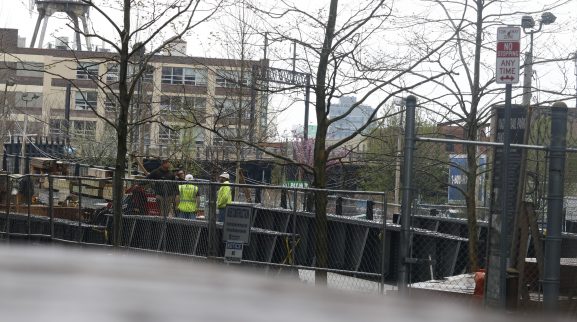 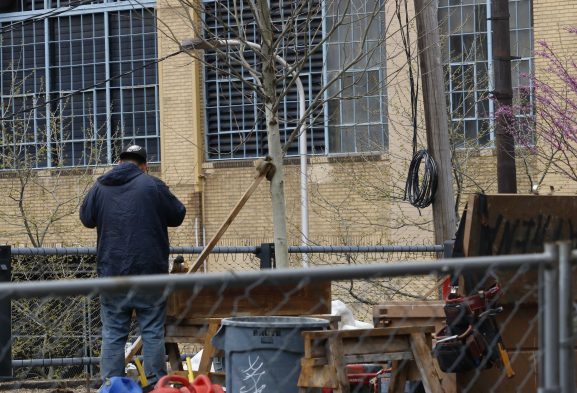 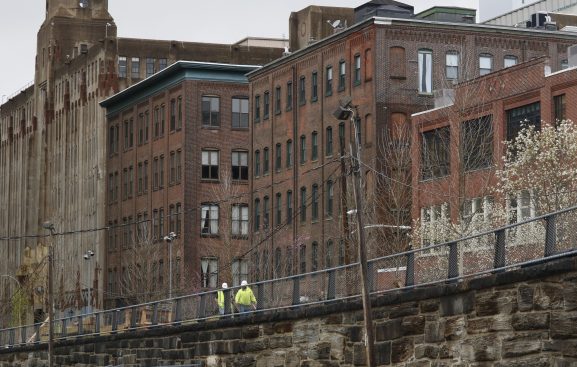 “This option will save time and money, preserve the character and original design plans of the park, keep the historic bridge intact and enable the park to open in early June 2018,” according to an April press release from the Center City District, which has handled fundraising, design and construction management for phase one.

The Center City District has leased the viaduct from SEPTA, which owns it, during construction. Once the first phase is completed, it will be turned over to the City of Philadelphia, which will own the park and manage it via a partnership between the Department of Parks and Recreation, the Center City District and Friends of the Rail Park.

The Reading Viaduct opened in the 1890s to allow passenger and freight trains to travel into Center City. It stopped operating in 1984, and SEPTA bought the section that is going to be phase one of the park in 1995.

In 2010, an environmental and feasibility study commissioned by the Center City District found that renovating the viaduct would be a more cost-effective option that removing it for a projected cost of $50 million.

Besides the bridge at 13th Street, other efforts have been made to maintain the history of the viaduct as the project has continued. Studio Bryan Hanes, a Callowhill-based landscape architecture and urban design studio founded in 2008, has been the lead designer responsible for the design of railings, surfaces, benches and platforms.

Bryan Hanes, the founding principal of the studio, said the choice of wood, steel and aggregate as main materials is because those are the main elements of a railroad.

He has also considered the post-operation history of the viaduct.

“When we got involved, the viaduct was relatively well overgrown and predominantly kind of overtaken by invasive species,” Hanes said. “But there’s a character to it that I think the neighborhood loved and really appreciated and appreciated the wildness to it. So we tried to kind of mimic some of the character of what that was as an overgrown kind of relic landscape when we got involved, but doing it with mostly native plants.”

An abandoned railcar at Broad and Noble streets will also be preserved as a welcome center and headquarters of Friends of the Rail Park, a non-profit working with the City of Philadelphia, Department of Parks and Recreation and Center City District.

A luncheonette frequently patronized by Philadelphia Inquirer reporters and factory workers used to operate out of the car, said McEneaney, who is a vice chair of Friends of the Rail Park. 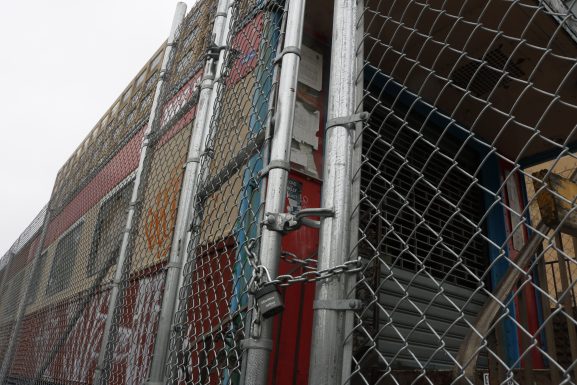 Car 1186, one of four identical models, was built at the Pullman Company’s Chicago-area plant in 1927 for the Reading Railroad for just less than $50,000, according to Reading Railroad Heritage Museum archivist Rick Bates.

Now, it is owned by Conrail, which is willing to turn it over for use on the Rail Park, McEneaney said.

In March, Friends of the Rail Park teamed with Little Giant Creative, a Philadelphia-based marketing and branding agency, to host a concert to benefit the welcome center project.

The fundraiser at the Voyeur Nightclub on St. James Street near 13th helped Friends of the Rail Park reach different audiences than it did at past events, McEneaney said.

“We want it to be a destination park for the whole city,” she said. “We want everyone to feel like they have ownership of it because eventually the whole three miles, it goes very near a lot of different neighborhoods.”

As more land is acquired for expansion of the project beyond the first phase, there is a possibility of opening another welcome center, cafe, contemporary art museum or railroad history museum at 9th and Spring Garden streets, McEneaney said. The two-story building used to be a station where McEneaney boarded trains to Germantown. 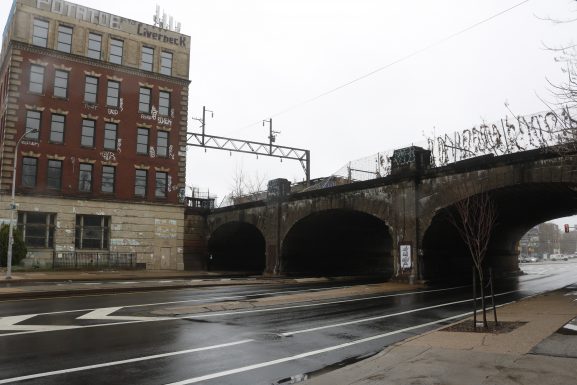 https://vimeo.com/31937924] Betsy Esteves was surprised to see the empty lot next to her home on North Third Street–a lot she fenced off, planted grass on, did some minor gardening in and has been struggling to [continue reading…]

It’s called 95 Revive, a project currently being conducted by the Pennsylvania Department of Transportation. The plans involve improving and rebuilding I-95, its bridges and interchanges. A major sector of the project includes reconstructing and [continue reading…]

María Quiñones-Sánchez took office 10 years ago representing District 7 in Philadelphia City Council. Long considered a party outsider, it is not uncommon to find her battling politically with Latino leaders in her own neighborhood, [continue reading…]