In many ways, Bok Won Kang’s immigration story is like that of many Korean immigrants to Philadelphia.

Kang, who is now the officer of civil affairs for the Korean American Association of Greater Philadelphia, first came to the United States as a student in 1968 during his high school years. Kang liked his experience in America so much that he eventually immigrated in 1979 and made his permanent home in Philadelphia.

Like Kang, many Korean immigrants first started coming to the Greater Philadelphia region during the late 1960s and throughout the 1970s.

Why did Korean Immigrants Come to the U.S.?

This burst in migration was the result of the Immigration and Nationality Act of 1965 that ended the U.S. immigration quota system which was created in the 1920s and limited the number of Asian immigrants to America.

During the 1960s and ‘70s, young Korean families began to immigrate to the U.S. because they couldn’t find work in Korea. Many of these immigrants were young professionals with entrepreneurial dreams and hopes that their children would benefit from America’s free public education system.

Michelle Myers, an adjunct assistant professor of Asian Studies at Temple University, added that the Korean War was influential in many Koreans’ decision to immigrate to the U.S. In the decades following the Korean War, which lasted from 1950 to 1953, many Koreans struggled economically and emotionally, she said.

South Korea’s post-war relationship with the U.S., however, offered the perfect opportunity for those seeking work and a new life to take a chance by coming to America.

“I think any of the trends or the movement toward economic stability or progress for Koreans, especially in terms of immigrating to the United States, I think it’s all been a result of the Korean War being an impetus,” Myers said.

Korean Immigrants by the Numbers

Where did Korean Immigrants Settle in Greater Philadelphia?

Struggles of the Korean Immigrant Experience

When the first Korean immigrants came to the U.S., they faced incidents of racial and cultural prejudice.

White Americans in Olney felt excluded by the business signs that sprung up in Korean around Fifth Street and ripped them down. But civic response eventually led to more understanding and cooperation between Korean business owners and white neighbors.

“It had to do with a lot of misunderstanding,” Myers said. “I think the language barrier had a lot to do with it, too.”

In the 1990s, Korean business owners made an effort to hire African-Americans and various intercultural and church collaborations improved the relationship between the two communities.

Today, the main struggle for most Korean immigrants centers around language. This is the case for new immigrants and those who have been living in the U.S. for years, Kang said.

Kang said some Korean immigrants can read English because of the exposure they had to the language in the Korean school system before immigrating to the U.S. However, speaking and understanding conversational English presents more challenges.

Many organizations and churches throughout the city offer English classes, Kang said, including The Nest Korean Presbyterian Church on Cheltenham Avenue, where Kang serves as co-pastor. However, immigrants struggle to attend classes or become frustrated when they don’t pick up the language quickly, he said.

“Most of them have their own business so they are so busy doing that they don’t have time to come over there and learn English,” Kang said. “We still ask them to learn English.”

Kang’s work with the Korean American Association of Greater Philadelphia mainly centers around helping with language translation so Korean immigrants can navigate legal matters, he added.

“They think they didn’t do anything wrong and then somehow they got fined or sued,” Kang said. “Sometimes because of the language barrier that’s what happens. Most of the time that’s the problem. They misunderstand each other.” 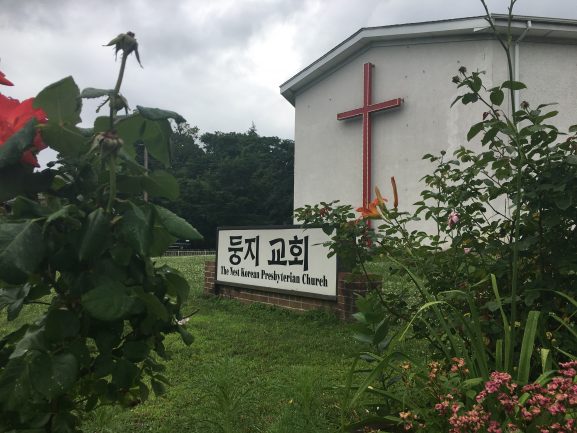 The Working Experience of Korean-Americans in Philadelphia

Kang’s experience echoes that of many Korean immigrants to Philadelphia in other ways, too. When he arrived in the city, he became a business owner, opening his own dry cleaning business where he worked 16 to 18 hours each day.

“At the time, the economy was good in America, and dirty jobs, American didn’t want to do that, so that’s what Korean-Americans took over,” Kang said, adding that many Korean immigrants opened dry cleaners and grocery stores. “A lot of people worked really hard.”

Many Korean immigrants opened up businesses along Fifth Street in the Olney neighborhood of the city. In the 1980s, some in the Korean-American community hoped to establish a Koreatown there, based off of the model in Los Angeles. This formal model never took off. However, Korean-Americans still own many business along Fifth Street today and many advertisements are even written in Korean.

More recently, Korean immigrants have moved their homes and businesses out into the Philadelphia suburbs and into areas like Lansdale because of better educational opportunities for their children, Myers and Kang said.

And while the first wave of Korean immigrants made their living as business owners, they have encouraged their children and grandchildren to go to college and pursue professions, like being a doctor or pharmacist.

The Importance of the Korean Church

For Korean immigrants struggling with a language barrier and missing their homeland, Korean churches became, and still remain, cultural homes in the U.S. and throughout Philadelphia.

“The only pleasure they had was going to the church and [to] meet other Koreans so they can speak Korean and then they feel home,” Kang said. “I think that did really good things for the Korean community.”

Immigrants come to church to speak Korean, make friends and practice English, Kang said. In addition, many churches also offer Korean school on the weekends, where children can learn Korean cultural practices and the language.

-Text and images by Jennifer Roberts.

Christ Church South Philly has impacted its Pennsport church community, emphasizing to its congregation the importance of love, family and praising Jesus Christ. The church began when its pastor, Jeff Boettcher (pictured below), wanted to [continue reading…]

Oak Lane Presbyterian Church, located in the East Oak Lane area of the city, offers many programs geared toward creating a tight-knit congregation. The church’s pastor, the Rev. Judith Brackett, had this goal in mind when she [continue reading…]