Liz Mehaffey Wade, 34 and a resident of the Graduate Hospital neighborhood, is the executive director of the Korean Adoptee Association of Philadelphia. Wade was adopted from outside Daegu, South Korea, when she was 3 months old before moving to northern New Jersey. She received her master’s degree in social work from the University of Pennsylvania, where she studied transracial identity in the case of Korean adoptees. Wade also has her own adoption consulting business.

Once a month, she and others from KAAP meet for dinner. Many Korean adoptees in the group are in their late-20s to mid-30s, Wade said, as a result of a boom in adoption from South Korea that occurred in the 1980s.

The following Q&A with Wade has been edited for length and clarity. 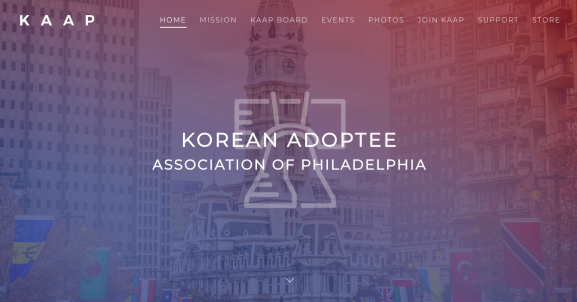 We all get together and do dinners or barbecues, picnics, going to see movies — mainly though dinners. And just because, it’s surprising, but there’s a lot of Korean adoptees who actually grew up without knowing any other Koreans or Korean adoptees. So it’s pretty nice to have this group where everyone can feel comfortable and all get together because we all have the same thing in common, which is that we’re Korean adopted.

What are some of the things from the dinners and meetings that people connect with? Are there similar experiences?

I would say meeting birth parents or searching for birth parents is a pretty big discussion. Returning back to Korea, that’s huge. And that’s basically one of the first things someone talks about is like, “Oh, have you returned to Korea? And what were your thoughts on that? How did you feel when you were living there?” And that’s actually one of the reasons why I studied that phenomena because there’s so many Korean adoptees who actually return to Korea; a lot of them stay. And it’s interesting to see. For me, I was interested in seeing how their racial identification process changed, but just in general it’s enormous how many adoptees stay even for a few months up to a few years up until forever.

Could you share your own adoption story? And why did you want to get involved?

What is your experience growing up? When did you start kind of asking questions of your parents about being adopted or about your birth parents?

I feel like there really wasn’t a start to those questions. Everyone always says, “How do you know you’re adopted?” Well, my parents are white. They don’t look anything like me. I used to be involved in a group when I was little called Rainbow Families. And it was basically like an adoption support group for all the families who adopted from Korea… and then I would be friends with all the kids. I think just through that I talked about being adopted and what it meant. But in terms of asking a lot of questions about my birth family, I never really did that.

I think a lot of adoptees feel protective over their adopted parents and they don’t really want to ask too many questions or it could be hurtful. I really wasn’t that interested. I knew my backstory, which my mom had said that [my birth parents] weren’t married and they couldn’t take care of me.

It was last year. It was a very interesting experience because I hadn’t planned for it. Back in 2010, when I started talking about this research that I did, I went back to Korea and I got involved with [Holt International]. And I became friends with my social worker. Then, fast forward to 2017, I wanted to go back to Korea with my husband because he had never been.

So I reached out to my social worker and told her I was coming by to take her out to lunch. And so I went out to lunch with my social worker and my husband, and she was basically like, “Oh, you know, I have some answers for you about your medical history, if you would like to come talk about it.” I was like, “Oh no, there’s some issue with my medical history.” So then I went to the room and she’s basically like, “OK, now you’re going to meet your birth parents.” And I was like, “Oh, wow.”

This was actually a Skype call because they were down in south South Korea, which is called Daegu, and I was all the way in Seoul.

It was a little surprising, but it was good. I actually still keep in contact with my birth sister, my oldest sister. So we talk in LINE, which is kind of like a Google Translate program, so that way I don’t have to sit there copy and pasting. So it’s nice. So I can kind of keep in touch with her and learn what’s going on in their lives and I can share what’s going on with mine.

Juniata Park/Feltonville: Save a Life with the ACCT

The Animal Care & Control Team of Philadelphia, also known as the ACCT, is located between Second and Front streets. It welcomes stray animals and the help of volunteers, as well as donations to help [continue reading…]

Southwest Philadelphia’s ethnic, racial, and cultural landscape has transformed in the past 25 years. From 1990-2010, the white population in the Elmwood neighborhood decreased from about 21,000 to 2,500, while the African-American population rose from 6,500 to [continue reading…]