Teresa Herrera’s dream began with a shopping cart, which she pushed around North Philadelphia and sold her homemade recipes out of.

Hector Hernandez’s began in the driver seat of a limousine.

Despite their varied experiences and industries, Herrera, Hernandez and Lin have all supported their families and themselves with their own businesses since arriving in the United States.

Herrera bought a food cart, which she now sells Mexican fare out of on Allegheny Avenue near Third Street. Hernandez has three limousines and operates the 24/7 Condor Car Service. Lin renovated that abandoned store and opened Bubblefish, a sushi and bubble tea restaurant.

Immigrants are commonly stereotyped as coming to America to profit from the government’s support. But many are initially drawn to the U.S. for work opportunities unavailable at home. Due to workplace barriers like lack of English proficiency and higher education, many become entrepreneurs.

“My whole life is here,” said Martin Botello, who left Mexico 23 years ago and owns the company Master Countertops. “If we go back, my family and work is here. There are more things to miss here. I can make it here. I’ve made it here.”

These statistics are reflected in Philadelphia. According to Philadelphia’s Immigrants, a report by the Pew Charitable Trust, about 11 percent of immigrants in the city reported being “self employed” or business owners in 2016. This is twice more than what was reported by native-born residents. 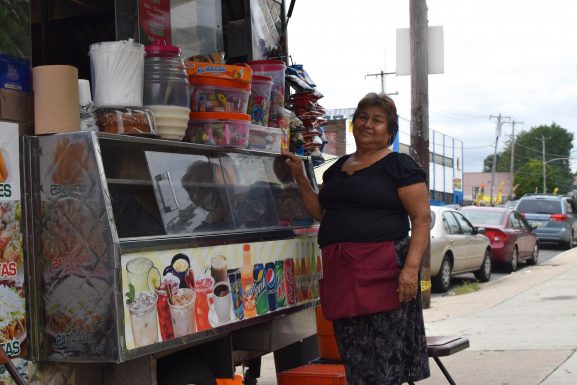 In Philadelphia, immigrants commonly work service jobs in the health care, education, hospitality and retail industries, according to the Pew report.

“For recent Chinese immigrants, you don’t have that many choices because … they only spoke Chinese and the only place that would hire you would be Chinese-owned businesses,” Lin said. His father also worked in the restaurant industry.

Not all immigrants who come to the U.S. end up opening a business or working in these fields. Options like H-1B visas, which are available for professions that require at least a bachelor’s degree or its equivalent, draw immigrants to the city for temporary opportunities in technology, engineering or similar fields.

In 2016, nearly 5,000 workers received permission to work under these terms in Philadelphia and accounted for 0.7 percent of the city’s labor force, according to the Pew report. Overall, immigrants made up about 19 percent of Philadelphia workers in 2016, an 8 percent increase from 2000.

An immigrant’s journey can be harrowing. Legally entering the country means facing an imposing and increasingly unwelcome bureaucracy. Illegally entering means taking risks like incarceration, prolonged separation from loved ones and forfeiting the protections and rights offered to U.S. citizens.

Upon arrival, finding work and entrepreneurship may still be difficult.

One of the biggest barriers for immigrants is their lack of financial capital and credit, said Luis Mora, the president of Finanta, which supports first-time business owners and homebuyers with loans and consultation services.

Nearly 70 percent of the nonprofit’s clients are immigrants, and it has lent more than $54 million in the course of 22 years. Many of Finanta’s clients are members of the Latino community, and it also partnered with the Southwest Community Development Corporation about eight years ago to reach Caribbean and African immigrants. About 50,000 African immigrants live in the Greater Philadelphia area, according to the organization Global Philadelphia.

In their home countries, Mora said immigrants may rely on the support of lending circles, which are informal groups whose participants pool their money. After arriving in Philadelphia, some continue this practice when faced with the unfamiliarity of U.S. banks, he added. Lending circles give immigrants access to financial support for their businesses, but don’t officially build credit.

Upon its founding in 1996, Finanta reached out to some of these groups and encouraged them to start putting these payments into savings accounts instead, Mora said.

“Our goal has always been to incorporate these immigrants and these communities into the mainstream,” he added.

Will Gonzalez, the executive director of Ceiba, said immigrants will also rely on informal networks and word of mouth when purchasing a home in Philadelphia. 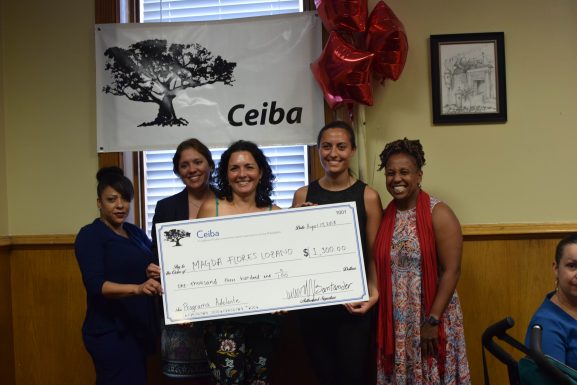 Ceiba is a coalition of four Latino-focused groups: Finanta, Esperanza, Norris Square Community Alliance and Concilio de Organizaciones Hispanas de Filadelfia. In the Caribbean, Ceiba trees are known for longevity and providing shade where people can gather — symbolic of the collaboration between the organization’s member agencies.

Among other financial literacy initiatives, Ceiba has a housing counseling program that teaches immigrants who are first-time homebuyers how to budget and build credit during workshops or personal appointments.

Finanta has also distributed $9 million in mortgage loans since 2009, after the nonprofit realized its clients were struggling to buy and maintain homes, Mora said.

Though housing support is not directly tied to entrepreneurship, many immigrants’ primary focus after they start working is buying a home — like Botello. He spent five years going back and forth with banks and landlords before officially buying his South Philadelphia rowhome in 2012.

“A home is one’s place,” Gonzalez said. “I think it’s the primal nature of having the place where you and your family come together and the simplicity of sharing meals to sleeping at night and safety from the elements. It’s just a basic human need.”

Staking their own claim

On a window ledge in his home, Botello keeps a small replica of the Charging Bull statue on Wall Street. It faces the kitchen, where Delfina Pacio, Botello’s wife, typically prepares traditional Mexican food on the granite countertops installed by his company. The recipes she makes are similar to the ones served in her restaurant Que Chula es Puebla on Second and Master streets.

The bull is a symbol of the entrepreneurial spirit in the U.S. — one that Pacio and Botello have been committed to since immigrating from Mexico more than 20 years ago.

When Botello left Mexico, nothing was promised for him in the U.S. He hadn’t even met Pacio yet — they, in fact, were introduced through co-workers a few years later. In a city more than 2,000 miles from his home, working was the only thing Botello had to define himself.

For several years, he took any job, like packing produce or driving. The whole time, though, he dreamed of opening his own business. Master Countertops now employs about 50 people, and Botello only hopes to expand.

Similarly, the majority of Lin’s first summer in Philadelphia was spent as a dishwasher in a Chinatown restaurant. Then 16 years old, Lin worked 12-hour shifts, six days per week — a role his dad made imperative. 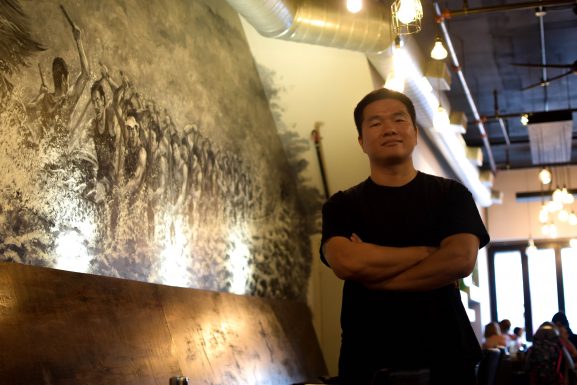 That summer was also the first Lin spent with his dad in eight years.

“That was not the kind of life I wanted to live, but that was what my dad’s entire generation knew,” Lin said. “That’s what they did to get us over here. He was working and paying rent and sending money back [to my family in China].

Lin struggled as a student at Horace Furness High School in South Philadelphia, where he said he was harassed for being Chinese and struggling with English. After a student used a racial slur against one of his friends, Lin found himself in the middle of a fight with about 20 spectators.

Outside of school and work, Lin found comfort in the community group Asian-Americans United and on the water with the Chinatown Dragon Boat Racing Team, which he is now the captain of. It was founded by his father, who died in 2014.

After his father died, work again brought Lin’s family together. His brother and sister had moved to separate cities for opportunities in the restaurant industry, and Lin realized he was missing the lives of his niece and three nephews. He convinced them to return to Chinatown for Bubblefish, which has a mural inside that commemorates Chinese dragon boat racing.

In about two weeks, Lin and his siblings will open their second restaurant, Ginza, in South Philadelphia.

“It’s worth it,” Lin said. “It’s generating profit, and it’s putting my family in one city. But we work way too much. We are all burnt out. We deserve a break.”

Lin’s career compliments the development of his identity as a U.S. citizen. But, for Magda Florez, the lack of consistent work in the U.S. exacerbates her struggling sense of independence.

Florez left Colombia in 2006 with her husband, who works in the pharmacy department at Temple University. She was an accountant there. The numbers translate in the U.S., but the systems used here aren’t the same, making it difficult to continue her career.

Florez is eager to go to school and work again, but nervous her mediocre English skills will hinder her. She’s considering studying marine biology — a career she fantasized about as a little girl.

“If you have a dream or you want to stay here, you need to work hard,” she said. “Don’t let your fears control you. For me, it’s very hard. I need to continue through my fears.”

The determination of immigrants is often overlooked by the government, Botello said. The immigration debate boils down to a basic concept: right versus wrong, and he said not enough credence is put on what immigrants like him, Lin, Herrera, Hernandez and Florez bring to the U.S.

Casinos: SugarHouse Gives Back To Community

As part of the Community Benefits Agreement with SugarHouse Casino, the Penn Treaty Special Services District has received $500,000 per year from SugarHouse since opening in 2010. Once SugarHouse’s second phase is finished, presumably bringing [Read More]

As a product of collaboration between four other Latino-focused groups (Esperanza, Norris Square Community Alliance, Concilio de Organizaciones Hispanas de Filadelfia and Finanta), Ceiba is an organization which offers a range of services, including advocacy work [Read More]