Crafted by artists from Tianjin, China and coated with tiles manufactured in Philadelphia, the Friendship Gate on 10th and Arch streets symbolizes a kinship between two cities that are nearly 7,000 miles apart.

In 1984, the 40-foot arch was erected at the border of Chinatown. Since then, massive development projects — like the Vine Street Expressway and the Pennsylvania Convention Center — have squeezed the neighborhood.

Some community organizations are fighting for the neighborhood’s preservation, like the Philadelphia Chinatown Development Corporation (PCDC) and Asian Arts Initiative (AAI). But, while the Friendship Gate stands for widespread acceptance, Chinatown residents have increasingly felt isolated from their neighbors and city.

The places where Albert Lee was born, lived and attended school are all within a three-block radius on Vine Street.

Lee — whose mother and grandparents immigrated to the United States — said some people are surprised when he tells them he grew up in Chinatown, assuming it only houses restaurants and tourist shops.

They’re not aware of the Chinese traditions that Lee remembers from his childhood. He learned Cantonese before English, and never cut or washed his hair on New Year’s Day to avoid bad luck.

Lee’s childhood paralleled his neighborhood’s metamorphosis. When he was 2 years old, eight years of consistent development in Chinatown began: 164 affordable housing units and 22 commercial storefronts were developed in the neighborhood between 1982-90. In 1989, when Lee was 9, City Council rezoned the neighborhood as a special district. It was rezoned in 2015, and the majority of the land is slated residential and mixed-use development. Less according to the People:Power:Place report released by AAI in June.

But the neighborhood and its needs have since been overlooked by developers, said Dave Kyu, a neighborhood project manager for AAI who worked on People:Power:Place.

“Chinatown has no library, has no rec center,” Kyu said. “That’s a real opportunity for a program that’s looking to decrease inequity.”

According to People:Power:Place, there are 738,148 square feet of underdeveloped land in Chinatown. But lack of public space and affordable housing still persist in the neighborhood, said Lamei Zhang, PCDC’s project manager for outreach, marketing and real estate.

Lee moved to South Philadelphia because he said he wanted to live in a house, and Chinatown didn’t have the space. Deeper than the lack of housing is the increase in rent between 2000-10. The average rent in Chinatown rose from $740 to $1,168 per month over those 10 years, according to the report “Who owns Chinatown: Neighbourhood preservation and change in Boston and Philadelphia.” That’s nearly a 23 percent increase, when adjusted for inflation.

The upward drive in rent is most likely tied to the city’s steady increase in population and influx of new residents in the neighborhood, according to People:Power:Place. Between 2010-14, Chinatown’s population grew by 41 percent, according to the AAI report. A staggering amount of people between the ages of 18-24 moved in. During those four years, the number of residents in that age group jumped by 463 percent.

These population changes align with new development in the neighborhood that includes concert venues, residential spaces and artist hubs.

Kyu said it’s important to welcome new residents as part of the community, but ensuring that longtime residents can remain in Chinatown is essential for its preservation.

A lack of public meeting spaces may also intensify a feeling of dispersion in the neighborhood.

Zhang said parks are scarce in Chinatown. People do occasionally visit Franklin Square near Race and 6th streets, but she said the sidewalks and area’s heavy traffic pose accessibility issues for older residents. Instead, families often resort to the playset in the yard of the Holy Redeemer Chinese Catholic Church and School, and friends and couples socialize in restaurants.

PCDC is responding to some of these ongoing needs in Chinatown by co-developing the Eastern Tower Community Center (ETCC) at 10th and Vine streets. The building, which is slated to be complete in 2019, will have 150 residential units and 15,000 square feet of community gathering space.

“To the south, we have The Gallery. To the west, we have the Pennsylvania Convention Center. To the north, we have the Vine Street Expressway,” Zhang said. “For us, that’s why we are always hoping development expands north of Vine Street. … Once the ETCC gets built, more development can also follow.”

Not all are welcome

In April 2017, the Redevelopment Authority approved a project that PCDC directly opposed.

Only two developers submitted proposals for the space at 800-30 Vine Street: Pennrose and Parkway Corporation, which collaborated with PCDC to develop its submission. Pennrose was selected for its plans to build the Equal Justice Center (EJC) — a centralized place for legal nonprofits to serve clients.

Since being approved, the EJC team has held two meetings in Chinatown to gather neighbors’ feedback. Still, the denial of Parkway’s proposal stung for some community stakeholders.

“Our proposal…provided jobs and opportunities for Chinese people,” PCDC Board Member Philip Sheau said at a community feedback meeting held by the EJC team in June.

Both proposals included features like affordable housing and community gathering space. Some of EJC’s specific features, like a potential hotel, seemed counterproductive and unnecessary to neighbors.

At the meeting, boards propped against the wall had questions about the project printed across the top in Chinese and English. Attendees weighed in by writing suggestions on Post-it notes. Interpreters were also present to assist non-English speakers.

The last board asked residents if there were any concerns or topics that hadn’t been covered by the other questions. One written response simply said “We don’t want this here!”

A “native son” of Philly

On a 2013 episode of the business-focused reality TV show Shark Tank, a contestant teared up after a judge agreed to fund his water-conserving invention for farmers with $150,000.

“Nobody owes you nothing,” Johnny Georges said on the show. “Life is what you make it. [My father] taught me that.”

As a second-generation immigrant, watching it reminded Lee of his family — especially his father, who spent weekdays living and working in Atlantic City to make ends meet while Lee was growing up. 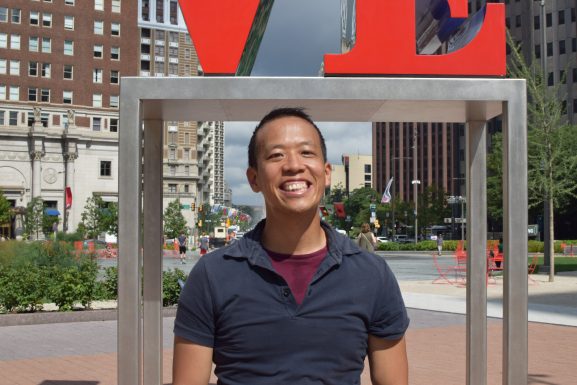 “When you’re young, you don’t understand hard work,” said Lee, who works in digital media. “It took me a while…but I understand what it takes to do what you can with what you have.”

Lee, a self-identified “native son of Philly,” grew up riding wire-connected trolleys on 12th Street, visiting Gimbels and checking books out at the Parkway Central Free Library of Philadelphia branch. He permanently etched his appreciation for his hometown with a tattoo of the LOVE statue on his upper left arm. The “O” is replaced with the Liberty Bell.

Even though he no longer lives in Chinatown, hearing about it was the sole reason his parents moved to the city. Plus, the way Philadelphia allows different cultures to flourish — like the convergence of young and old neighbors in Chinatown — is a constant in any neighborhood, he said.

“People of all cultures come to the city so they can start anew,” Lee said. “My family did that. I thought it was important to always rally behind the immigrant story. … Philadelphia isn’t one solid color. We are a diverse city.”

-Text and images by Grace Shallow.

Pennsport: A Look Behind the Development of Pier 68

Initial repairs for South Philadelphia’s Pier 68 are to begin shortly. The pier, located behind the Wal-Mart on Columbus Boulevard in Pennsport, is to receive a major renovation. The project will transform the centurys old [continue reading…]

Kevin Smith is president of the Manayunk Neighborhood Council, a not-for-profit civic association dedicated to promoting a unified and sustainable community in Manayunk. Smith, who was raised in Southern California and moved to Manayunk about [continue reading…]