A staple of the Overbrook community, Papa Playground’s after-school program serves youth of all ages. The neighborhood recreation center strives to attain a safe and structured environment, while providing students with the tools to achieve academic and social success.

Cynthia Brown, the after-school director, oversees the program and ensures the curriculum is best meeting every student’s needs. Brown organizes a regular routine that allows the children to have a snack, complete school assignments and engage in free play all while enhancing their development as they move forward in the early and most influential stages of their lives. 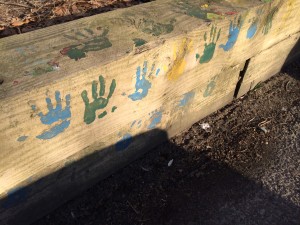 “Every day we like the children to work on their homework for 15 minutes without the help of staff,” said Brown. “But on Friday, we have ‘free Friday,’ where we allow the kids to play games, go outside and just have fun.”

In addition to Brown, the after-school program staff consists of local seniors and college students, who all play an important role in the cohesiveness of the near 60-student program. All take great pride in the fact that over 85 percent of the children in the program are on the honor roll, while the rest preserve at least a “B’ average.

“We have great students here, and all of their parents are extremely active in their learning.”

Papa Playground is one of several parks and recreation centers that provides a home away from home for children who may benefit from a community-based organization that keeps them engaged with a positive attitude. The facility is run by the city and has been serving children and their families for over six years. During the summer months, the after-school program transitions into a summer camp, providing an additional safe haven for kids when there is no school. 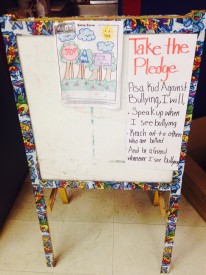 Brown likes to be creative with the program by offering a reward system. When children excel, they are given money to purchase treats at the mini makeshift store, supported by the staff. All the funds spent there go directly back to the program.

“The store permitted us to by a 47-inch TV, a Wii system, computer games, and additional educational supplies.”

Being in the inner city, it is undeniable that much of the youth are at risk, and could fall victim to the pressures of violence and drugs. According to Philadelphia crime trends, nearly 9 out of every 10 shooting victims are between the ages of 18 and 24, and teens are most likely to be a defendant of a shooting charge. Although Brown is aware of these dangers, she strives to instill positivity and encouragement.

“Here at the Papa Rec Center we have a pledge: ‘I must respect myself and others, I can do many things, and success is my goal,’” said Brown.

She continued by saying every child is to know, recite and believe the pledge. Brown is also an acting crossing guard, and stands for zero-tolerance and a bully-free organization.

Brown strives to keep the children active by coordinating field trips on half days and implementing sports and activities such as soccer, baseball, Girl Scouts and Zumba.

“There is a lot of work being done outside, and around the facility, so we will be doing things such as scavenger hunts and field day.” 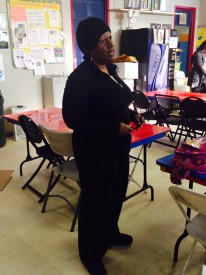 Studies show that an organization such as Papa Playground increases a child’s willingness to learn, improves academic performance and reduces juvenile crime. Researchers believe that after-school programs permit students to channel their energy into something positive.

Additional analysis revealed that after-school hours are the most risky for children. The Department of Justice reported that most juvenile offenses occur on school days in the hour immediately after school lets out.

With the Philadelphia School District budget crisis, Papa Playground along with a plethora of other recreational programming was subject to closure. However, in October 2012, Mayor Michael Nutter preserved recreational and after-school programming throughout the city stating that, “In addition to strong academic programs, extracurricular based programs are vital to the health and development of well-rounded students.”

Brown is very adamant about the success of the children who are reliant on Papa Playground. She wants to secure a safe and supervised environment for students. She has a strong desire to create change in her community by ensuring students are setting and achieving goals that will allow them to develop into hard-working and respected adults.

Brown knows that all of her students will go to college, and is certain that they will become models for future empowerment and leadership for a community that is progressing past the status quo.

It is 4:20 p.m. and the security line at the school district’s Education Center was beginning to grumble with agitation. A mother clutched a poster-board using it as a fan as she stood in line […]

https://vimeo.com/36336206] From the stairs of Harold O. Davis Memorial Baptist Church, there was a visible sign that read “Welcome to Hunting Park.”  The park’s playgrounds, baseball field and stage stood nearby. This area was home […]