Project Positive is an organization that expresses its message through hip-hop dance. Incorporating workshops, performances and community partnerships, Project Positive strives to inspire the youth in Philadelphia.

“Hip-hop dancing saved my life when I started at the age of 14,” said Damon Holley, who founded the organization in 2010. “It kept me out of a lot of trouble and kept me focused on my goals. I wanted to create a program where I could inspire the youth in my community to do the same.”

Project Positive interacts with the youth at organization dance workshops. These workshops are open to all ages and include basic and master classes, freestyle and choreography.

“We have hip-hop workshops every Monday, Wednesday and Thursday as of now,” Holley said. All of my guys who work with the organization have toured abroad and teach all over Philadelphia. I went from having five people in a workshop at one time, to 30 people at one time. Through social media and word of mouth, it gave us a platform to reach more people.” 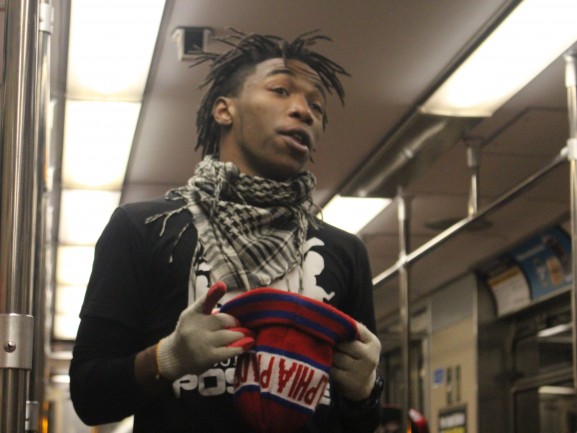 “I used to see Project Positive in Love Park all the time and I would show them what I could do,” Pettway said. “My freshman year of high school, I got a chance to sit down and talk with Damon. After that, I started coming to events and doing gigs around the city. It’s been wonderful since.”

Pettway and Holley expressed how Project Positive makes a difference for kids in the inner city.

“Some of the kids who come in aren’t feeling too cool, maybe something’s going on at home or at school,” Pettway said. “When they come in, we do this thing with them called a cipher circle, which is a way to get everything out and show us who you are. It gives them a place to feel at home and be around people that have the same passions that you have.”

“Living in a neighborhood, where there are a lot of turf wars, drug problems and single parent homes, there are a lot of things to attribute for failure,” Holley said. “When you have something that can release your artistic vision, it can change your perspective on what’s possible. I just want to be the platform for others.”

Many people have seen Project Positive dancers on the SEPTA subway lines in the city showcasing one of their signature acts. The performance involves the dancers using the moving train to perform choreographed hip-hop and break-dance maneuvers.

In addition, the performers will rap and harmonize verbal requests for donations for to the organization. After the length of one stop, the performers transfer over to the next train car and do the act all over again.

“At first when we started it was a little rough,” said second-year member Mike Cannon. “The more we ride, the more we know how the train moves and how much time we have for the act.”

Antwoine Freeman, a three-year member of the organization, expressed that the subway performances serve as an inspiration to kids.

“When the kids get out of school, they see what we do,” Freeman said. “We’re having fun, not robbing anything or picking fights, and making a good living. We’re not out on the streets.”

For Holley, a particular incident with the SEPTA police changed his outlook on what he wanted to accomplish with Project Positive. He realized he could do more.

“I have been arrested for performing on the train,” Holley said. “It was a disorderly conduct charge. I beat the charges but at the end of the day, it was a wake up call to get more serious about what I was doing with the workshops and put more energy about giving back to the schools.”

Since then, Holley has shaped Project Positive into an organization that plays a visible role in the community.

“We just did a performance at Delaware County Community College highlighting the history of hip-hop,” Holley said. “We’ve recently partnered with Alex Peay, who is part of a nonprofit organization called Rising Sons. He’s been helping us leverage community and corporate sponsored events.”

Over the summer, Holley received a grant of $10,000 from the Knight Foundation through their Black Male Engagement funding initiative. The purpose is to help African American men build prosperous communities. He says that the money will help further achieve the goals of Project Positive.

Even with the expansion of the organization, Project Positive adheres to the same philosophy they have had since the start. By doing so, they continue to help shape the community of Philadelphia.

“We always say we believe in PEACE – positive energy allows constant elevation,” Holley said. “I want to burn that concept into the minds of everyone around the world. Some people think life is so hard but it’s all about thinking positively. It’s that simple.”

– Text, images and video by Patrick Smith and Deneia Washington