The Philadelphia Streets Department announced plans to allocate funding for the city’s first protected bike lane to be built along Ryan Avenue, between Lexington and Rowland avenues, in Mayfair.

“We had a councilman who wanted to do it,” said David J. Perri, Commissioner of the Streets Department. “It’s in the right cycle of its lifespan for a repaving and there are minimal confrontations with physical constraints such as replacing traffic signals and with curb cuts.”

Perri believes protected bike lanes could become more prominent around the city but for now, they remain somewhat of an unknown.

“We really wanted to do one because we need to evaluate and gain experience with what the maintenance issues are going to be,” Perri said. “We also need to see how it gets accepted by the community and any unforeseen issues with putting a bicycle facility in.”

Councilman Bobby Henon, of Philadelphia’s 6th District, worked with the Bicycle Coalition of Greater Philadelphia for more than a year on establishing plans for better biking in his district. He believes it is the right time for the city to move forward with projects such as these.

“With the debut of bike sharing, Philadelphia is rightfully adapting to a growing cycling culture that many rely on for more than just recreation but as a primary means of transportation,” Henon said. “We also need to prioritize safe spaces for cyclists to ride. Implementing protected bike lanes is a great first step.” 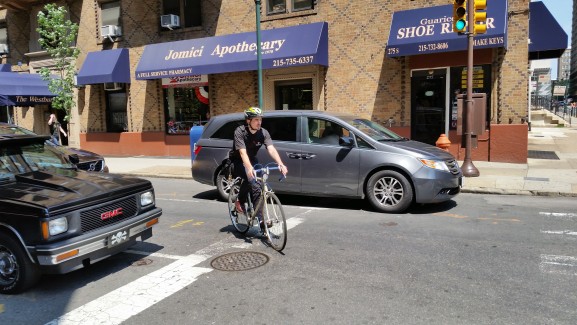 The Ryan Avenue protected bike lane will run alongside Abraham Lincoln High School’s grounds and culminate on the north end at Pennypack Park, which is known for its vast recreational bike trails.

“We also looked at connectivity to other parts of the bike network,” Perry said. “There’s a bike lane on Lexington and on Rhawn. In essence, we’ll eventually be able to loop that entire area, with the on-street bike lane and also connect you to the park.”

Perri felt that it was important to keep the bike lane out of residential areas in order to ease the community into the idea of this new protected concept.

As much as a new bike lane may sound like fluff news, this is an important victory for the Bicycle Coalition. (Another win for the Coalition was securing Philadelphia Eagles linebacker Connor Barwin as a spokesperson.

Communications manager Randy LoBasso believes it is right up there with Complete Streets law passed in 2012 and enacted in 2013.

“[Complete Streets] basically says, in like 300 pages, when new streets are paved, the people who do the planning and the people who do the paving, the Streets Department, they have to take into account all road users,” LoBasso said. “Most streets over the past half-century have only thought about the driver. From now on, all streets have to also think about the cyclist and the pedestrian as well.”

Although the law aims to better plan for all modes of transportation, it does not require bike lanes on every repaved street.

“It depends on the streete,” LoBasso said. “For certain streets, if the law says the street is wide enough, they have to put in a bike lane. This will apply to 22nd street.”

Right now a bike lane spans from Spruce Street to Spring Garden Street along 22nd Street. According to the Bicycle Coalition, the abrupt end in the lane is due to city councilman William Greenlee’s opposition to it.

“So, Greenlee lives in the neighborhood and he says that he has talked to neighbors who also didn’t want it,” LoBasso said. “But he refused to hold hearings on it. Because of the way city council is set up, it is very legislative branch heavy and that’s how they were able to do that.”

Councilman William Greenlee could not be reached for comment. 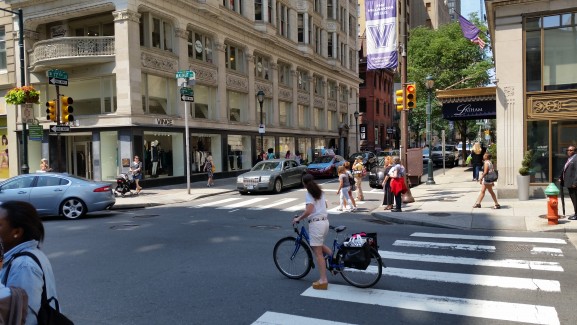 “I am happy that a couple of years ago, I think, Bill Greenlee, councilman, was behind requiring that before bike lanes be installed, it has to be approved by the community and go through city council and that is entirely appropriate,” said Stu Bykofsky, Philadelphia Daily News columnist. “I know it outraged some of the ‘bikeheads’ because they think they should have bike lanes wherever they want even though they are a tiny percentage of people who use the streets.”

The former gossip columnist claims to be just about the only member of the media to hold a critical viewpoint of biking in the city.

“I don’t hear them making a big deal out of [bikers] blowing red lights, not stopping at stop signs and, most especially, riding on the sidewalk,” Bykofsky said. “I’d love to see the Bicycle Coalition campaign against that.”

A May 2014 report from the United States Census declared that Philadelphia “had among the highest percent of commuters who bike to work.” While nationally, only 0.6 percent of workers commute by bike, Philadelphia has 2.0 percent. Since 2000, this number has increased from 0.9.

With 2.0 percent, Philadelphia ranks 14th out of large cities in the U.S.

Philadelphia is also the only city with a population of more than one million people that cracks the top 15.

“The Bicycle Coalition and their supporters are always quoting percentage numbers,” Bykofsky said. “When you break down the numbers, they are still infinitesimal. I think what I’ve seen recently is 2.1 percent. The city’s goal was 5 percent by 2020. I keep saying they’re not going to make it. That’s my opinion.”

Bykofsky stated that biking has definitely gone up “dramatically.” He just doesn’t agree with the way the Bicycle Coalition portrays statistics.

“When I started writing about this, it was like 1.7 or 1.8 [percent] about four years ago,” Bykofsky said. “So, it’s gone up a little bit since then. Now, I say, if you go from 1.7 to 2.1, you’ve gone up four tenths. But as a percentage, I’m bad at math, but it’s about a 20 percent increase. Wow! It’s a four tenths of percent increase and how many bikes does that represent? Maybe a few hundred in a city of 1.5 million.” 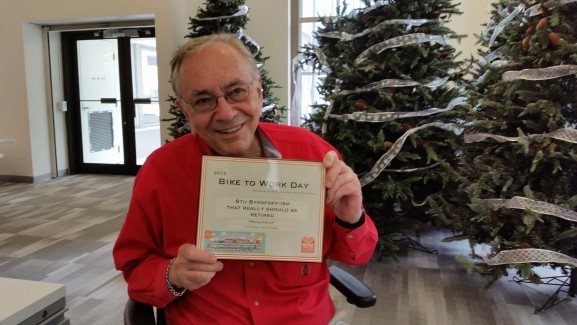 Bykofsky described his relationship with Bicycle Coalition executive director Alex Doty as one built on love-hate qualities. On 2015 Bike to Work Day, Bykofsky was awarded a plaque for the ‘Stu Bykofsky-ism That Really Should Be Retired’ for his use of the term ‘Pedalphile.’

Oddly enough, Bykofsky hasn’t owned a car since 1977, when his son totaled his.

With all of this ‘bad blood’ between them, both the Bicycle Coalition and Bykofsky seem agree that making street and sidewalks safer for vehicles and pedestrians.

“You have to play by the rules,” Bykofsky said. “You can’t tell me we’re going to use Idaho’s law here. You know what, if you think that being allowed to have a red light treated as a stop sign, then change the law. I probably won’t fight you on that. And a stop sign treated as a yield, I’m okay. Change the law.”

On Election Day, femme. collective will cast a vote for president that is sprinkled with lady power. Femme. collective is a Fishtown-based, all-female group of dancers and artists who support feminism. The core group, of less [continue reading…]

The construction of new houses on Reed Street in Pennsport is expected to bring new and younger tenants into the neighborhood. Long-time residents do not mind the changes but there are a few issues. “This [continue reading…]