Joe DeFelice, chairman of the Mayfair Community Development Corporation, was tired of driving by the vacant house on the 3400 block of Ryan Avenue on his way to work, so he decided to do something.

DeFelice (below) learned about the law Act 135. Act 135 Conservatorship, a law written by State Representative John Taylor, helps to eliminate abandon homes and keep a certain standard of living in places such as Mayfair. He filed the law in hopes to see a brand-new home take over the abandoned duplex. 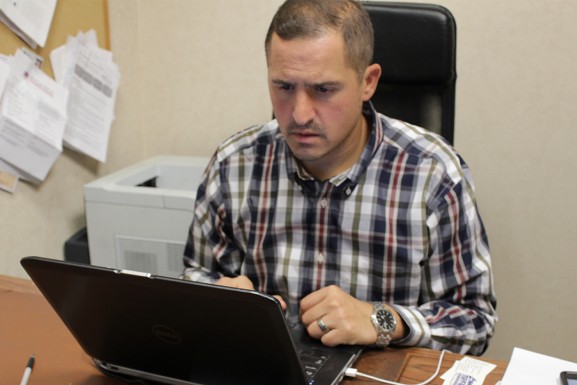 In order for an unoccupied house to be renovated, it must meet the criteria, which includes abandonment, delinquent on taxes and an eye sore to the community.

The Mayfair CDC finished renovating their first abandoned home in July on 3569 Sheffield St. The house was boarded up for two years after a house fire. DeFelice filed Act 135 on behalf of the Mayfair CDC and the court allowed the law to go through.

Cheltenham native Melissa Borda bought the house in the beginning of October 2015 and is in the process of moving in the refurbished home.

“I was always interested in moving into Mayfair,” Borda said. “After seeing this house, I knew I wanted to live in the neighborhood.”

Not only does renovating homes bring back appeal but also jobs for local residents.

Mayfair resident, Charles Faillace (top) is unhappy about living two doors away from a boarded house. Faillace and his family have lived in their house for more than 20 years. The abandoned house doesn’t just affect Faillace’s living environment, but also his personal life.

“It’s hard to have people over when there’s a boarded up house in plain sight,” Faillace said. “It’s a disgrace that the city allows a house to be boarded up.”

Faillace and several of his neighbors are fighting for the house to be claimed by the Mayfair CDC.

Mayfair CDC’s end goal is not to take over properties because it takes a lot of time and effort. Their goal is to make productive use out of vacant homes.

The Mayfair Community Development Corporation is in the process of claiming two abandoned homes 3246 Ryan Ave. and 3318 Bleigh Ave.

Northeast: Future of the Devon is Still Uncertain

https://vimeo.com/21260409] Mayfair’s Devon Theater for the Performing Arts may be closed, but some local residents said plans for its future are still alive, and they are working to reopen the theater. The performing arts center, […]

The Mayfair Community Development Corporation and the Allegheny Iron and Metal Corporation have joined together to revitalize Mayfair. The specifics of the deal will be explained to the public on April 21 at the debut of […]