Recently, the gym Fearless Athletics has been going through what could be called a growth spurt. Membership has continuously risen at its South Philadelphia location, and now it has opened a new location in Old City.

One of the staples of the gym is its early morning classes. Classes begin as early as 5:30 a.m. on weekdays, and 8 a.m. on the weekends, catering to those who like to get their workouts early in the day. Despite the early start time, the classes are well attended, and have become a weekly routine for some members.

Daniel Leary regularly attends the 8 a.m. classes on Sunday, and said getting a workout early enables him to relax for the rest of the day. 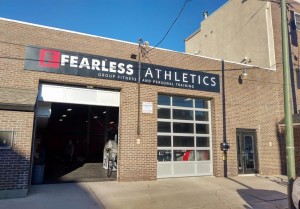 “Getting it done in the morning allows me to have the full day in front of me,” he said. “It also gives me some energy to start my day.”

Daniel Ceisler has been a member of the gym for nine months, and said working out early gives him justification for having a job where he’s sitting for most of the day.

“I’m a [Temple University] law student, so I’m sitting down most of the time during work,” Ceisler said. “Working out is like my release, and I believe it justifies me sitting down for long periods of time.”

The familiarity of members, and the nature of a cross fit workout, seems to be the common thread that get students to return to the early bird classes.

“Crossfit is like a community,” Ceisler said. “It’s friendly competition, and I for one enjoy being able to see myself improve my time and scores against my classmates.”

“Attending the morning classes, you begin to build camaraderie with the people who also attend regularly,” Leary said. “From there it becomes like a small community.”

Leary has been a member of the gym for three years, and said attending the early morning classes has paid off over the years.

“Going in the morning has made me more disciplined [about waking up early],” he said. “I began eating more healthy, and noticed my overall wellness has improved.”

Rock, Paper, Scissors may seem like a childish game to most people but for the members of the Pabst Blue Ribbon Philadelphia Rock Paper Scissors City League Championship Series, it is a very serious endeavor. […]

Between the graffiti, chipping paint and ancient swing set, Weccacoe Playground doesn’t look like a popular place for children to play. It appears almost neglected. But the playground at the corner of Fourth and Catherine […]

A T-shirt that reads, “single with cats,” is one of the first things a customer see when they walk into Knack Philadelphia. That and a tote bag that states, “cats are my bag.” “I have […]