Since the Danube Swabian Association moved to Fox Chase in 1972 it has been dedicated to passing on its Germanic culture and history, as well as honoring the memory of those lost to the ethnic cleansing in Yugoslavia in the 1940s.

One Danube Swabian member, 89-year-old Katharina Marx, is a survivor of ethnic cleansing.

Marx was born in 1928 in Palanka, Yugoslavia, now modern day Serbia. Her father was a farmer and in her early life was raised along the Danube River. Her family had little money, but lived happily until the Soviet Union swept through in the fall of 1944.

“On November 29, 1944, our village was the first one,” Marx said of the invasion. “The Russian troops came house to house with their bayonets on their rifles. They had a list and said, ‘Five minutes leave the house.’”

The Red Army of the Soviet Union and a group of Yugoslav fighters, the Partisans, drove out the German troops who had previously invaded Yugoslavia. This enabled the leader of the communist party, Josip Tito, to take over the country.

Shortly after taking over, Tito and the Partisans began targeting ethnic Germans like the Danube Swabian, who had settled the land roughly 200 years earlier, and seized their properties.

With no boys in her family and no loyalties to Germany, Marx’s father saw no reason to abandon their farm and homeland.

Marx recounted how other families with sons conscripted into the German army fled, fearful they would be targeted. Ane Kizmann, the wife of the former vice president of the Danube Swabian Association, and her family were among those who fled Yugoslavia in 1944.

“So when the war came and they said we should leave, we left,” Kizmann said. “We were afraid.”

On the morning of November 30, Marx remembers her family and the remaining villagers were forced to walk 40 kilometers, roughy 30 miles, to the Batschki-Jarak camp, also known as Camp Jarek. 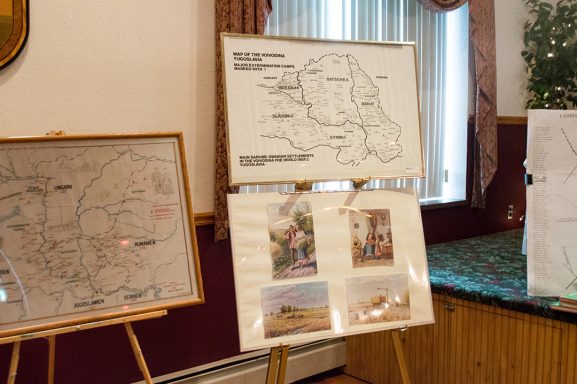 “The children and old people, everyone who couldn’t make it were shot,” Marx said.

It was in October 1944 when some 2,000 Danube Swabian villagers living in Jarek fled in fear of the approaching Russian army and Tito’s Partisans. And by December 4, those in the area who could not leave or chose to stay, like Marx’s family, were interned at Batschki-Jarak.

At the concentration camp, people were divided into two sections.

“The working class on one side and the non-working class, the old people and the children on the other side,” Marx said.

Marx was separated from her family and would not see them again for three years.

Marx said the non-working class were not allowed to cook. They were only given a single cob of old corn to eat. In order to survive, people would secretly make corn bread by rubbing the corn against stones to make flour. Then they would mix it with water and cook it over fire.

“When the commandant saw the smoke she would come in on horse and those people were hit,” Marx said. “They were punished because they were cooking the corn.”

Marx, who was 15 at the time, was forced into the working class camp and fed only a soup made of water and brown flour in the mornings and beans for lunch and dinner. 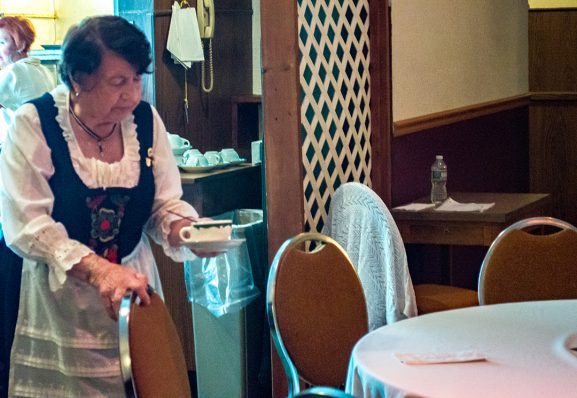 By the time the camp was closed in 1946, roughly 15,000 to 17,000 people were imprisoned at Jarek. It is estimated 6,500 people died there due to starvation, illnesses and abuse from the Partisans.

After Jarek closed, Marx was transferred to Gakowa, another death camp in the north. There, Danube Swabians were trapped and slowly starved them to death explained Fred Gauss, president of the Danube Swabian Association.

“In Gakowa [the partisans] took all the people and put them in houses,” Gauss said. “They had guards lined around the city so that you couldn’t get out. And if you tried to get out, you were shot,”

Gauss’s mother was a survivor of the ethnic cleansing, but many of her relatives did not survive the Gakowa camp.

Marx was able to flee across the border from the camp into Hungary in 1947. But Marx was not free from the camps yet because a Communist regime had taken control of the country. The threat of being caught and sent back to Yugoslavia loomed over her.

“The Hungarian people warned us,” said Marx. “‘Don’t take pillows on your back. People know where you’re coming from when you travel, leave them behind.'”

Marx had to make her way through Hungary avoiding the authorities, while making money to secure her crossing into Austria. She spent a few days working for a farmer and sold jewelry in a market to purchase a train ticket to take her across the border into the Russian zone in Austria.

“The custom officers opened the gate and said, ‘Welcome,’ in Austrian,” Marx said.

After reaching the Russian zone, Marx had a half-day’s walk to the English zone, to freedom. There, Marx joined thousands of other refugees who made it to Austria and was registered by the police in the town of Furstenfeld.

Marx arrived in Austria in October of 1947, five months after her parents and sisters. Marx, still a minor, was not allowed to go and meet her parents. She had to wait in the refugee camp for her parents to arrive.

Reunited after three years, Marx could hardly recognize her mother.

“She aged and lost a lot of weight,” Marx said. “She was like a different woman. I grew up and she grew old.”

Marx and her family spent their first night reunited in a small room, eating corn meal.

“In Austria we were 12 people in one room, but it was peace, a peaceful night,” said Marx. “We didn’t have to think, oh they’re coming to steal this from us, they’re coming to take everything that I have or take you somewhere and you don’t come back.”

Arriving in Austria with nothing, Marx’s family spent a hard winter in the refugee camp. Her father cut down trees for work. He received little pay and her family survived mainly on boiled potatoes.

“In the springtime they transferred our camp to Eidenberg, which was further to the north and we had to take care of ourselves,” Marx said.

During her time in Austria, Marx studied English and began working for the English troops stationed there. Eventually, she was able to save up enough money and join her sister in the United States.

“This was a strange country,” said Marx. “We had no idea about America, no idea at all.”

In 1972, the organization bought a private home in Fox Chase. Now, that home is the clubhouse of the Danube Swabian Association. Throughout the years, Marx and others would spend weekends and private funds to build up and expand the home.

Today, their club has a private soccer field for its youth soccer club, a catering hall to host concerts and other events, as well as a downstairs area for members to gather.

“We had an extremely high will to survive and to create,” Marx said.

For many people like Katharina Marx, there were not many existing organizations to help them settle in Philadelphia. Transitioning to the city, and country, can be especially difficult for immigrants who have difficulty speaking English.

Sherman stormed down the 3500 block of Ryan Avenue as dusk was falling on Mayfair’s first ever Third Thursday festival. He reached the corner of Ryan and Leon streets, his head on a swivel. Who […]

Through the power of art, even the most complex stories of immigration and assimilation can be expressed. Located on the 1200 block of Vine Street, the Asian Arts Initiative has linked art and communities since […]

Champ Nutrition has been the mecca of bodybuilding supplements and equipment since opening its doors in 1997. Located at 3338 Grant Ave., the fitness shop provides customers with everything they need to stay healthy, and get […]