Darnell Drayton didn’t know anything about landscaping or gardening before joining the Pennsylvania Horticultural Society’s (PHS) Roots to Re-entry program.

Drayton (pictured above) just wanted something to do while in prison.

He completed the program and was taught how to landscape so he could return to society with a useful skill. When he was released from prison, he was trained to be an independent contractor

That’s the goal of Roots to Re-entry, a PHS program teaching incarcerated people about landscaping and horticultural skills, so they can work upon release. In some cases, people can leave prison early if they opt-in to the program. The average recidivism rate of people going back to prison is over 76 percent within five years. Those who go through the Roots to Re-entry program, which has been around since 2006, only have a 30 percent recidivism rate, according to its site.

Since 2016, it was revamped to take in both incarcerated people and people who have been recently released. The program has placed 100 people in jobs.

Nayo Shell, manager of the program, pointed out how recidivism can easily become a slippery slope.

“If you’re coming back to society, trying to reintegrate, trying to support your family, but you don’t have any money because you can’t get a job because you have a record, what are you going to do?” Shell said. “You might be more encouraged to go back inside.”

Each person going through the program learns how to use trimmers, mowers, and other hand tools. They learn how to prune trees, basic weed removal, tree planting and mulching. They undergo over four weeks of training and two weeks of apprenticeship. According to Shell, after the apprenticeship period, about 90 percent are hired by other contractors. 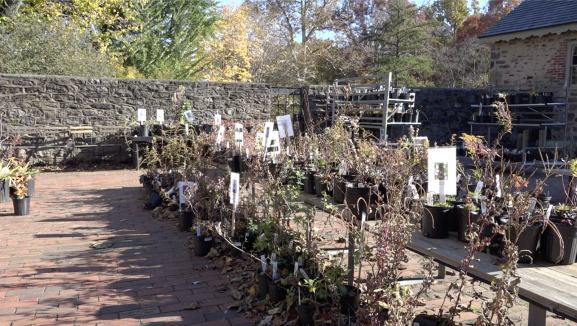 “A lot of people who have a record, it’s hard for them to land on their feet,” Shell said. “A lot of people recidivate, but we try our very best to make sure that they don’t.”

Shell said PHS not only trains people but also assigns a caseworker to every graduate to keep them on track. They teach graduates how to return back to society, how to create resumes, and practice interviewing skills. The largest priority is making sure graduates are employed.

Shell doesn’t expect everyone who goes through the program to stay in horticultural careers, but the goal is to make sure graduates land a career in something. According to Shell, some of the graduates have ended up working for city offices.

Drayton graduated from the second class of the program, but he wasn’t one who stayed out of trouble. He went back to prison a second time and went through the program again. When he was released the second time, he was committed to doing things differently.

“Sitting in a cage is not humane,” Drayton said. “I love my wife of 18 years and my beautiful kids. She said if I go back again, she’ll leave me.”

Landscaping tends to only be seasonal work, especially in northeastern parts of the United States. According to Shell, the program is actively trying to find other ways to get their clients more stable work.

Drayton makes money in the offseason by ensuring to have multiple skills. He’s learning to be a carpenter and also works a few painting gigs. Now, he has a full-time job working for PHS’s Rain Check program, where he builds rain barrels, bins and planters that help homeowners manage stormwater runoff.

Troy Johnson is another graduate from the Roots to Re-entry’s. He graduated from the first class in 2010.

Eight years later, he owns his house in Germantown and lives with his girlfriend. On his front lawn, his grass is cut in the shape of a star. He’s thinking of leaving Philadelphia eventually, though he was born and raised in the city.

Johnson said the hardest part of coming back to society after being incarcerated is looking for work. He currently works as a driver for High Point Cafe and doesn’t landscape as his main income, but he still enjoys doing it during the spring and summer.

Drayton said having a support system is what makes the most difference when it comes to staying out of the justice system.

“It’s not support financially or physically,” he said. “It’s mentally. I’m not saying my door is always open, but I’ll help how I can.”

Like Johnson, he’s thinking of leaving Philadelphia soon and start a new life, possibly in New Jersey. In 10 years, he said he wants to have at least two gardens, with an emphasis on farming produce. He wants to promote healthy eating and sustainability. But something else still calls to him.

“I started making art out of it because that’s what my biggest thing is,” he said. “I love art and I’ll make art out of anything.”

— Text and images by Taylor Allen and Kaicey Baylor

Queen Village: Tree Tenders Put Down Roots In The Community

A group of volunteers in Queen Village known as the Tree Tenders came together on Nov. 19 for their bi-annual tree planting. They devoted their Saturday morning to improving the quality of life in the […]

[vimeo 69130357] The City Harvest Program, founded by the Pennsylvania Horticultural Society, provides fresh produce to residents in need. The program, which is in its seventh year, was started by local gardeners who wanted to share […]