Penn Alexander School saw nearly a 17 percent increase in its extra curricular funding by the School District between the 2008-2009 and 2013-2014 school years. With the help of $45 million in state education funds released to the School District in October, the school was able to maintain its music program.

Administrators have some flexibility with funding at their own schools.

“It really depends on the principal, how that principal actually managed their budget,” said Fernando Gallard, chief of Communications for the School District. “They all have actually freedom to move certain dollars around.”

“But we live in an area where there’s a lot of parental input and really strong parental involvement,” said Ann Schwartz, owner of the Green Tambourine Music Studio. “So I think that had a lot to do with the maintaining of the program.”

“There are many more middle-class families living in the Penn Alexander catchment compared to the catchment for Lea or Bryant or other places in the city,” Kimmelman said. “We have art at Penn Alexander because the base of parents who go here can contribute money to pay for it.”

The school’s arts and science programs benefit from an annual 5K run, but Penn Alexander’s art teacher is only part-time. 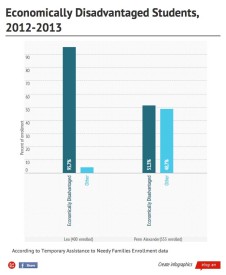 In June, the School District announced lay-offs of 3,783 employees, including 676 teachers and 283 counselors, to take effect in July.

“I’ve been told that a lot of teachers [at Penn Alexander] are doing stuff that they used to get paid for, and that they’re doing it unpaid,” Kimmelman said.

Schwartz chose to teach outside the school system so as to have more freedom with her methodology.

“Some people are visual learners, some people learn better through hands-on learning,” she said. “It’s unfortunate that we can’t use that knowledge that we’ve learned about how to teach and the best practices to teaching.”

“Many of the public schools in this area do not have full-time art teachers, so parents are looking for ways to supplement that, and this is an option for them,” said Noreen Shanfelter, executive director of the University City Arts League.

According to Shanfelter, enrollment in after-school programs has exploded in the last three years. From its partnership with Penn Alexander, the majority of students in Arts League programs are from the school. As such, pickup services after school are provided at additional cost.

Penn Alexander School officials did not return requests for interviews.

“It’s easier to cut an extracurricular activity,” Shanfelter said. “I think people tolerate that a little better than if you lost one of your English teachers or one of your math teachers.”

A key to Philadelphia’s funding issue is Pennsylvania’s education allocation system. Unlike most states, Pennsylvania does not use a funding formula to determine how much will go to schools. From 2008 to 2009, the state used “student factors,” such as district enrollment, students learning English as a second language, district poverty levels, and local tax effort to determine state education funds.

This is in addition to a base cost, which is the same amount given to every school district. As a result, larger, poorer districts with higher property taxes saw more state funding, according to an Education Law Center report.

After Gov. Tom Corbett took office in 2011, Pennsylvania began relying solely on a base cost. Currently, the state funds account for 35.8 percent of public school budgets, compared to the national average of 43.5 percent.

Kimmelman, a parent-activist involved with numerous Philadelphia organizations, said the public schools are stratified according to need and resources.

“What’s happening to the Philadelphia school system is happening across the country,” Kimmelman said. “We have high-stakes testing, we have tied fair funding of schools to test performance, but we have not, particularly in Pennsylvania, given resources according to need.”

https://vimeo.com/30444063] Labels are everywhere. In their best form, labels help people identify the good from the bad. In their worst form, labels unjustly stigmatize a brand, business or, as in the case of Kensington, an [Read More]

https://vimeo.com/39997335] University City is known for being generally safe, in part due to pressure for safety because of the large student population. But to people like State Rep. James R. Roebuck, the title of University [Read More]

Voices in Frankford have united, stating that crime is the primary concern for their neighborhood. Many believe the next mayor of Philadelphia has a responsibility to tackle the issue, even if they don’t agree on [Read More]