In 1989 Bilal Qayyum led the creation of an organization called the Father’s Day Rally Committee. From its inception the FDRC has sought to promote responsible fatherhood in African-American communities across Philadelphia. Over two decades after its founding the FDRC is considered one of Philadelphia’s most active grassroots organizations working to stop the negative attitudes that destroy families and neighborhoods across the city.

Seeing a landscape of problems the FDRC held its first citywide rally in 1989 to focus attention issues impacting black males in Philadelphia. That year the organization held five other rallies where men brainstormed solutions. That brainstorming helped shape the FDRC’s structure and it gave substance to the scope of its work.

The FDRC currently operates a series of programs designed to promote more productive interaction between African-American males and their communities. Project Lifeline is a citywide effort to support the growth of strong family relationships. Black Men in Crisis is an initiative created by the FDRC to unite black men across the city to confront issues regarding the criminal justice system, economic development and health education. The FDRC also manages the David P. Richardson Rites of Passage Program, the Universal Men’s Health Initiative and the Fathers Fed Up Program.

One of the FDRC’s most popular events is its family picnic in Fairmount Park held annually on – what else – Father’s Day.

For more information on the FDRC or to get involved, visit their website at https://www.fdrc.net/. 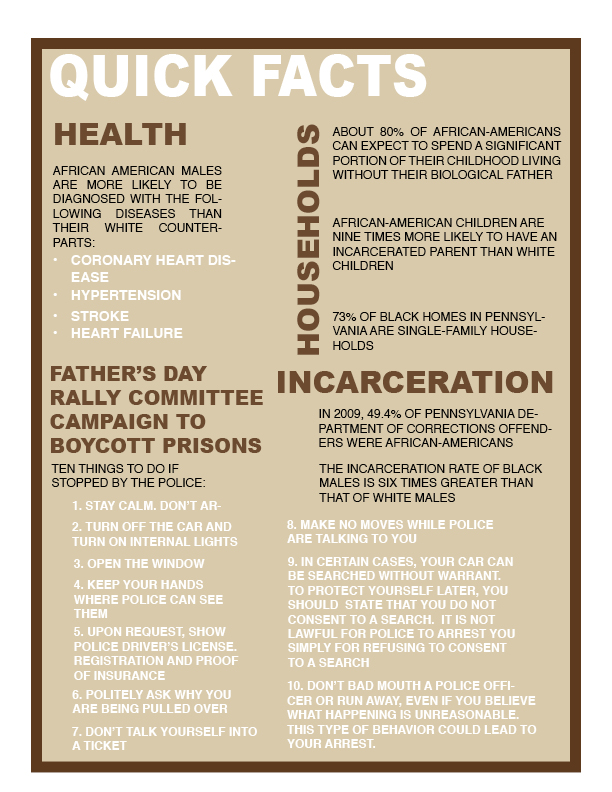 Kensington: Coral Street is an Oasis in a Troubled Neighborhood

https://vimeo.com/62819266] The scene on the 2700 block of Coral Street could be quickly mistaken as any other residential community in Philadelphia. Children ride up and down the street on their bikes, two teenage girls enjoy [Read More]

https://vimeo.com/39605989] Although Officer Tim Hagins now works in the narcotics unit of the Philadelphia Police Department, he hasn’t forgotten the cases of missing and abducted children he’s dealt with during his career. Hagins is dedicated [Read More]

The tallest building on Baltimore Avenue in Cedar Park neighborhood is the Victorian-style tower of the Calvary United Methodist Church. The building looks like something out of Notre Dame as it seems to look over [Read More]