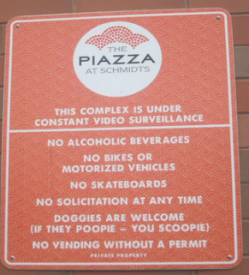 Residents of Northern Liberties voiced concerns about the need for an increased police presence in the wake of a shooting yesterday outside a popular bar and restaurant in their neighborhood.

The victim, Maurice Kimble of Upper Darby, was shot outside the PYT Restaurant. He was later pronounced dead of his wounds at Hahnemann Hospital. The shooting was apparently the result of an argument between the gunman and Kimble inside PYT that is located in The Piazza at Schmidt’s complex. Police said their investigation is ongoing and they have not released a report on this fatal encounter.

The Northern Liberties Neighbors Association received numerous telephone calls from concerned neighbors after the news of the fatal shooting began circulating around the community, association president Matt Ruben said. Neighbors expressed interest in an increased police presence around The Piazza at Schmidt’s. Though security was present PYT, members of the community said having more police might have deterred the escalation of violence that ended in the fatal shooting.

Ruben, providing an account of the fatal event, said,  “It is my understanding that an altercation took place between two men who may or not have known each other. After firing the shots, the man fled with two women and one other party.”

Employees, neighborhood residents, Piazza patrons and employees found the crime news unsettling but were not completely surprised. They echoed concerns about what they contend is a lack of police presence for the area’s popular nightspot.

“Maybe they should consider policing Northern Liberties a little bit more, possibly,“ said Lori Dee, an employee at The Piazza. “I’m surprised there was a shooting, but I hear there’s not a very good crowd all the time at that place, so maybe that’s part of the problem.”

The Piazza at Schmidt’s hosted Philadelphia’s second annual Wanderlust, a free all-day festival with hundreds in attendance, earlier this month. The day was designed to merge participation and appreciation of yoga culture. Wanderlust is a yoga [Read More]

In case you missed it, we found a few places where people were talking about West Oak Lane.  Woman arrested in fatal shooting of man in West Oak Lane – A woman was taken into custody [Read More]

John Edwin, founder of Strength Personal Training and co-owner of Strength Academy in Northern Liberties, works everyday to help people achieve a healthier lifestyle and reach out to the community around him and beyond. How did [Read More]