Penn Alexander School’s kindergarten waitlist ended this year, changing to a contested lottery. Traditionally, parents had waited in line for days to register. School District Superintendent William Hite made the change within days of becoming aware of the situation, said Fernando Gallard, chief of communications for the School District.

“It was a change that was based on what we believe is the most … equitable and just way of doing enrollment at the school,” Gallard said.

Parents were only notified of the move on the evening of Jan. 18, four days before registration was scheduled to begin. Parents had already begun camping outside Penn Alexander’s campus at 43rd and Locust streets.

“We were all in line and [the school] passed out a letter,” said Eric Santoro, a Penn Alexander parent. “Someone from the School District came and talked to us.”

Santoro was among the over 70 people waiting in line, with the registration for non-neighborhood schools having passed on Nov. 30.

Gallard personally distributed letters announcing the change to a lottery. “I was there to collect names of everyone that was in line,” he said, “and then I would then turn that over to the School District for them to do the process.”

The waitlist will continue for grades first through eighth, due to less demand for registration; the largest number of new students at Penn Alexander comes through the kindergarten.

Santoro registered his second child for the kindergarten this year. Families cannot have sibling preference for registering multiple children. Everyone on the waitlist for this year’s kindergarten was admitted or self-selected out.

The lottery registration’s deadline was moved from April 1 to Feb. 11, shortly after Hite met with parents on Feb. 7. Gallard said this change occurred because parents requested it, to allow themselves more time to find alternative schools.

“It’s very confusing … I don’t understand the reason for the change,” Santoro said.

Abby Slakoff tried to register her son for Penn Alexander, after Alexander Wilson School on Woodland Avenue closed this year.

“I need to work all the time,” said Slakoff, a single parent. “I spent 24 hours in line for Penn Alexander.”

Penn Alexander’s waitlist will restart on June 30, instead of rolling over as it did previously, replicating waitlists at J.R. Masterson and Central high schools.

Officials from Penn Alexander did not return requests for interviews.

Penn Alexander, formally the Sadie Tanner Mossell Alexander University of Pennsylvania Partnership School, is one of the highest-performing schools in the School District and began facing overcrowding about five years ago. Its unique structure comes from the three-way partnership between the School District, the Philadelphia Federation of Teachers, and the University of Pennsylvania.

UPenn allocates $1,330 per student every year, and a member of its Graduate School of Education coordinates the academic curriculum. This involvement has led many parents, including UPenn employees, to petition the university to assert more influence in the registration issues.

“At the end of the day, our resources are great but not infinite,” said Joann Mitchell, vice president for institutional affairs at UPenn.

The problem, UPenn and the School District say, stems from a lack of facilities and a desire for smaller class sizes and green space.

“It would mean going out of that site and given this financial situation we’re in we’re not looking into expanding at this point,” Gallard said.

“There were standards that were put in place in terms of enrollment for kindergarten,” said Joann Mitchell, “which was to be capped at 18 students per class and then for upper grades the class size was, I believe, 23 or 24.” 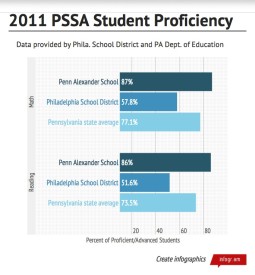 With 553 enrolled this year, Penn Alexander intends to keeps the smaller class sizes which were key to original building plans.

In the school’s beginning, community groups were involved in talks about if the school would be public or private, and who was eligible to attend. “People in the neighborhood were adamant that ‘No, this would be our neighborhood school,’” said Monica Calkins, SHCA Education Committee chair.

Mitchell estimated 20 percent of Penn Alexander parents are university-affiliated, compared to 35 percent when the school opened. UPenn students often volunteer at Penn Alexander, but Mitchell said the school was never intended to be a school for UPenn employees.

The Graduate School of Education says it does not make policy decisions. The School District updates UPenn of changes at the school, but does not need permission from the university to act.

The 10-year renewable contract requires consensus from the School District, the Federation and the university to change, as was the case in 2012 when a fourth kindergarten class was added.

Previously, children not admitted to kindergarten could still get into first grade, said Calkins, whose daughter is in the fourth grade at the school. Penn Alexander stopped automatically accepting all students in the catchment in 2011.

At the same time, 36 students currently at the school do not live in the catchment. As the Philadelphia Inquirer reported in March, a tradition of “superintendent’s privilege” allowed central School District staff to admit children to the school “for personal or academic reasons.”

Before Calkins joined SHCA, she joined an informal parents’ group that met to find a solution to overcrowding. “It’s all very behind-the-scenes,” she said.

Santoro questioned the level of transparency on the part of the School District and Penn Alexander. “That’s something I’d like to see different,” he said.

Slakoff said she was treated rudely by Penn Alexander staff and that her son fit better at the nearby Henry C. Lea School. Slakoff attended several meetings with the School District to protest the closing of the Wilson School.

UPenn gives nonmonetary help to the Lea School, at 47th and Locust Streets, with volunteers and teaching workshops. Mitchell said no underlying agreement with Lea currently exists. Lea School officials did not return requests for interviews.

Penn Alexander’s catchment spans roughly from Sansom Street to Chester Avenue, and from 40th to 47th streets. The Daily Pennsylvanian reported that homes in the catchment value about $100,000 more than comparable University City homes outside the catchment.

The school was created in 1998 and opened in 2001 with two test grades in kindergarten and first. The remaining grades opened in 2002. Click the box below to see a timeline of the school.

https://vimeo.com/78315473] Plans are underway for the empty lot at the corner of 43rd Street and Baltimore Avenue. What began as a basic residential complex has expanded to 7,300 square feet of retail space, 108 residential units, [Read More]

West Philadelphia: One Brick Philly Helping Non-Profits in the City

The Pennypack Environmental Center is a city-owned and operated facility run by Philadelphia Parks and Recreation. The center, located at 8600 Verree Rd., had its official opening in 1969 and is a subdivision of Pennypack Park. It was created with [Read More]