From front to back, the Rev. Al Masluk’s office is filled with photographs and memorabilia from his experiences and travels. A picture from his time in the Reserve Officers’ Training Corps (ROTC), during his time studying at Villanova University. A statue of Superman. A knight’s suit of armor, and many items of his favorite cartoon character, Mickey Mouse.

All of these items may imply a man of great integrity and fortitude who also possesses a soft side. These are items not typically found in the office of a Roman Catholic priest, but they directly describe “Father Al.” 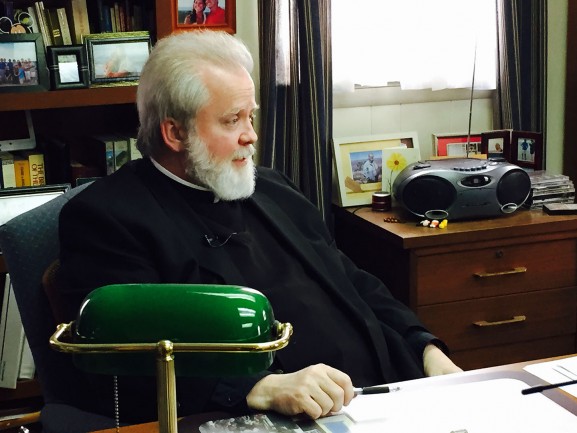 “I was an ROTC scholar. I planned to be in the Navy [and] figured I’d get my degree while in the Navy. After 20 years in the Navy, I was going to retire and teach college. That was the original plan,” Masluk said, pointing at his memorabilia.

“I had a great interest in history. I was going to teach history, but I had some time to think in my first year of college and, as much as I was happy with the ROTC program, I wasn’t content,” he said. “God finally got me. He said, ‘It’s time to go to the seminary,’ and I did it. I’ve been content ever since.”

He was born in Philadelphia in the old Lankenau Hospital, which closed two months after his birth. He grew up in St. Veronica’s parish and attended the now-closed Cardinal Dougherty High School. Masluk joked, saying he noticed “a pattern” when talking about “his hospital and his high school” closing after his departure.

Masluk was taking a major step when he decided to leave Villanova to join the priesthood. He was leaving behind a full scholarship with the ROTC. He was not sure if his decision would ultimately pay off, but he “felt great peace and [has] ever since.” 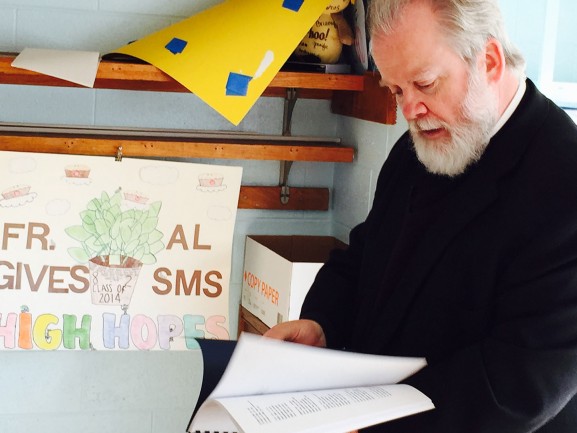 “The old rabbi says, ‘If you wanna make God laugh, tell him your plans.’ So, most of the time we plan all these things out without really asking God, ‘Is this really what you want me to do?’” Masluk explained.

He went to St. Charles Borromeo Seminary and was ordained on May 19, 1979. Needing to have a master’s degree to teach, he returned to St. Charles. His degree allowed him to connect with college kids, whom he taught at Immaculata and Holy Family universities.

Masluk became the pastor of St. Martha’s Parish off Academy Road in July 2002. He has been praised by many for building the Brian Butler Gym, named after a young man from the parish who died in a car accident at age 26. While he appreciates the acclaim for the gym, Masluk wants the acclaim to be about the school and its students, like the many eighth graders he teaches Latin to on Monday afternoons.

“We wanted to make ourselves stand out from the other schools in the area. We wanted to be different in a good way. The ‘new St. Martha’s,’ I called it. We upgraded our curriculum in a lot of ways,” Masluk said. “They learn the simple [Latin] tenses, or two-thirds of what you might learn in high school courses. It’s enough to get started. From here, they can easily pick up the high school course.” 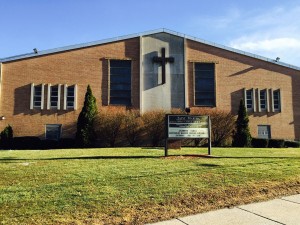 Masluk has been at St. Martha’s for almost 13 years and has developed a great relationship with the students, especially those in Jennifer Hepp’s kindergarten class.

“Father Al does a lot of stuff with the kids. He comes in at Christmas time and reads them How The Grinch Stole Christmas in the voice of [Boris Karloff], like the cartoon,” said Hepp, who has been teaching at St. Martha’s for 17 years. “At Thanksgiving, he comes in with our Thanksgiving feast and he serves the kids. I cook it, but he serves it, and [they] really love that. He always makes it a point to come to everything that we have.” 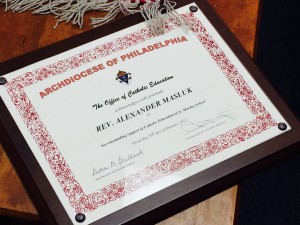 Art Calvo, who is the coordinator for the Confraternity of Christian Doctrine at St. Martha’s, met Masluk under hard circumstances.

“It was about 12 years ago. I was in the hospital with a heart problem. I was in cardiac care and in walks this priest. He says, ‘Would you like me to hear your confession?’ I say, ‘It’s been 20 years since I’ve been to confession.’ [Father Al] said to me, ‘I’ve got time,’” Calvo said. “He’s open to new ideas, open to change, and his input is invaluable. He’s involved with the kids, and he encourages me to be involved with the kids as well.”

Masluk puts more than just work into St. Martha’s. He puts his life into it, and shows he is able to serve and make a difference. 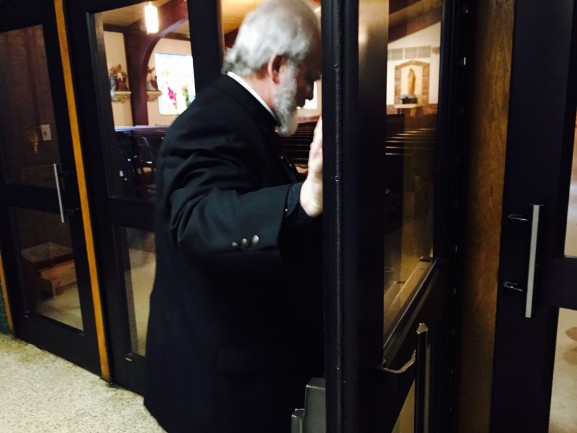 – Text, images and video by Chris Cornwell and Rich Flanagan

Bernadine Hawes is a Washington D.C. native who moved to West Philadelphia in 1972 to get her master’s degree in Medical Sociology at the University of Pennsylvania. She has since been a very active member [continue reading…]