On May 1, parents will vote on whether to keep Steel Elementary School in the hands of the school district, or to allow Mastery Charter to take over operations. Several parent and teacher groups have been firm in their opposition, claiming that such a takeover would take away resources from students.

“Rather than provide schools with resources and support, the district has instead asked educators to take a pay cut so it can continue to pay the charter companies to run schools that have been starved to failure,” Philadelphia Federation of Teachers President Jerry Jordan said in a statement.

But Mastery claims that Steel would be stronger than ever if it were to take over.

“If families should choose Mastery, they will see more resources in the school next year,” explained Mastery director of communications Sheila Ballen. “For example: Class sizes will be smaller, there will be two teachers per classroom in kindergarten through second grade, and all students will have art, music, gym and Spanish classes in addition to the core curriculum. Additionally, we will have a full-time social worker, full-time counselor and a nurse at the school.” 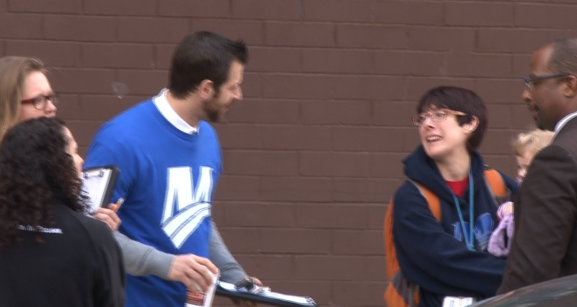 Mastery will give a presentation to parents on April 23, followed by one from the current school admini-stration on April 29. After the presentations, the district will take two votes: One from parents at Steel, and another from parents that sit on the school advisory council. Both sides of the debate anticipate a close vote.

The votes will be among the factors considered by the School Reform Commission, which will make the final decision.

– Text and images by Joe Coufal

https://vimeo.com/93909422] It was an intense and emotional journey leading up to the results that would help decide the fate of Edward T. Steel Elementary School in Nicetown. It would soon be decided if parents and the [continue reading…]

Members of the West Philadelphia Alliance for children (WePAC) recently hosted a discussion “Budget Battles: A Conversation on Philly Schools” at the Haddington Branch of the Free Library of Philadelphia. WePAC provides literary programs to [continue reading…]