The Fishtown Recreation Center represents how a community can be sustained not only through cleanup efforts, but through the ongoing commitment from community members across multiple generations.

This 1.4-acre facility welcomes new members to utilize both the indoor and outdoor areas, while also serving as a familiar and nostalgic space for those who have grown up in Fishtown.

Kiersten Roberts, a current resident who was also raised in Fishtown, remembers the significance the space held for her during her childhood and how this same significance carries on for those who use the center today. 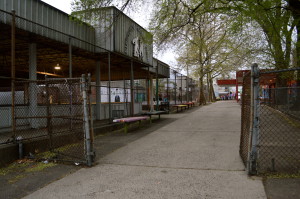 “When I was younger, this was the hangout spot for everybody, to just sit on the swings and hang out,” recalled Roberts, who now brings her daughter to the center’s playground once or twice per week. “It’s a good way for kids to meet each other, grow up with each other and get to know each other.”

Tawanda Beale, a Taekwondo instructor at the center since 2005, also recognizes how family members from different generations continue to have an attachment to the facility and what it provides.

Among the thousands of students she has taught throughout the past nine years, Beale explained how she has seen participants grow older and go away to college, while the younger sibling has followed in their older sibling’s footsteps.

By providing local youth with the opportunity to get involved and stay active after school in a positive way, Beale hopes that her students will extend what they learn beyond the class and into their everyday lives.

“So that’s the kind of thing I’m hoping that comes out of this, not just a great workout and not just rank, but just that they impact the community by talking to people and even opening their minds to say, ‘I don’t think that’s appropriate,’” said Beale. “And if they can say that when they’re young as they get older they’ll be able to say it to other people.”

While longtime residents feel a sense of shared comfort and friendliness at the Fishtown Recreation Center, newcomers are also welcomed by this same sense of community.

Paul Mullin and his family recently moved to the Fishtown area in June of last year. He enjoys bringing his son to the center’s playground roughly three to four times per week.

“It’s the closest park to us and there are usually a lot of friendly kids here that like playing with my son,” he said. “It’s great because this area is very densely populated and it has open areas for kids to play basketball and run around, a place they can run and not worry about traffic. It’s great. We like it, we need it.”

Mullin also feels that this park is a good way to help sustain the community and the surrounding area.

Nancy Sodos has been living near the Fishtown Recreation Center for 38 years and recalls when her son used to spend time at the center. Now, Sodos is able to share this space with her granddaughter and appreciates how time spent here together helps to create long-lasting memories.

“It’s nice [because] the kids come in and play and get along well. It’s a friendly place,” she said. “It’s very family-oriented. Parents feel it’s a safe place, too. We know everybody.”

While Sodos appreciates what the Fishtown Recreation Center provides for residents, she also would like to see some more maintenance and upkeep on the center’s grounds to keep the space thriving for generations to come.

For the Fishtown Recreation Center, sustainability is just as much about physical cleanups as it is about creating a space that is maintained through the personal connections made by community members.

– Text, images and video by Caitlin Cowan and Joanne Caruso.

When Joe Livewell uncovered the “ghost sign” beneath the plaster, a hand-painted advertisement of a boy holding bread, it solidified the fact that Richmond Street was once a place for foot traffic, a place where ads, […]

Marley McNamara turned her passion for music into a career. McNamara became involved with the Philadelphia music scene through a job tending bar at World Cafe Live. From there, McNamara began booking small shows at […]

The blocks of Frankford Avenue that snake through Fishtown and Kensington have seen a resurgence in businesses in the past five years. This trend is only expected to intensify if the proposed zoning code changes […]