Being transgender in Philadelphia is still something that incites violence and discrimination, but not nearly as much as it used to, according to Elizabeth Coffey Williams.

“I lived the white-picket fence, husband, dog, swimming pool and garden club life for many, many years,” she said, ” and now I find myself in the center of a large city that I remember very well, but it’s very different. It’s really good.”

Williams, a transgender woman who moved to the Philadelphia area about a year and a half ago, said she’s seen so much progress for the transgender community, especially in Philadelphia. But there’s still a long way to go.

Williams transitioned in 1972 after filming Pink Flamingos with John Waters. She lived as a self-described Midwestern housewife and raised a son for more than 25 years before moving to Philadelphia, where she currently lives in the John C. Anderson LGBT-friendly senior housing with April Murdock, whom she calls her partner-in-crime.

“I’ve never been happier in my life,” Murdock said of her current lifestyle and position in the community. “There’s still a lot of hate that we have to get past but it’s getting better. It’s slowly getting better.”

Murdock knows all too well first hand of this hate.

People from her neighborhood saw her outside of work – dressed as a woman – and decided to take the matter into their own hands.

But it wasn’t just a bashing. Murdock was surrounded by a few men, hit on the back of the head and within 10 to 12 seconds, she was stabbed seven times and shot twice.

“Technically, I did die,” Murdock said, “and I was revived.”

This attempt on her life because of her transgender status didn’t make her want to run from it but instead made her embrace who she was.

“Sometimes people don’t understand when I tell them that in a lot of ways, I view it almost as a privilege having gone through that,” she said. “I learned so much from that experience and I view life completely different now. I’ve never been happier in my life than in order to get here. If I had to go through all of that again that’d be fine. I’d do it. Because I’m that happy now. Life was not fun before. So yeah, it’s okay.”

Williams wants the focus of the transgender movement to stay off of the tragedy and the drama, as she called it.

“There’s enough of that,” she said. “People know about that and it creates an unfortunately negative stereotype for trans people.”

On that note, according to Julia Gottlieb, of the Mazzoni Center, there definitely have been some positive things happening for the transgender community in Philadelphia. 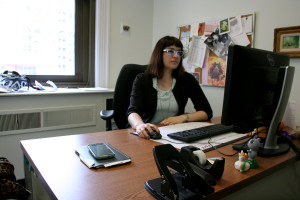 “In the past year, SEPTA has changed their rules when it comes to trans passes and gender,” Gottleib said.

SEPTA’s policy since the 1980’s was to put a sticker defining a person’s gender on their Transpass so that heterosexual couples could not share a pass. However, RAGE, Riders Against Gender Exclusion, a group formed of transgender people and their allies, took up a case against SEPTA in 2009 and by 2013, SEPTA admitted defeat and decided to vote to give up the gender stickers.

Before SEPTA’s new policy update, there was only a female or male trans pass option. It was up to the sole discretion of the SEPTA employee, whether the bus driver or the person manning the ticket booth, to decide if someone was female or male.

“You could have somebody who was a female of trans experience,” Gottlieb said, “If a bus driver decided, ‘Hey, you’re looking male to me, you might be using somebody else’s trans pass,’ they wouldn’t be allowed to get on the bus. It can be a really terrible deterrent.”

With moves like SEPTA’s, Gottlieb believes transgender people are feeling safer to transition earlier and others are beginning to understand the trans community better.

“Now, I think people are having an awareness of what trans means a lot earlier in their development and that gives them more of a chance to identify with somebody outside of themselves,” Gottlieb said.

– Text, video and images by Amber White and Susan Dong.

Oftentimes when people look at a crumbling building, they see nothing quite resembling art. They see an ugly, decaying structure left for dead, not an extraordinary piece of brilliance. However, there is someone out there […]

Golf’s popularity has taken a hit in recent years. Courses around the world have been forced to try and find ways to bring people back and increase sales. Enter foot golf, a blend of soccer […]