The transgender community has seen many changes throughout the years. One of those changes has been the rise in the number of support groups that are available to the community.

“There were no support groups,” said Elizabeth Coffey Williams, an artist and former actress who came out as a transgender woman in 1972. “There was basically nothing.”

There are now many more resources out there for the transgender community to utilize than there were in the past.

“Trans rights are moving to the forefront now,” said April Murdock, the facilitator of Transway, a program of the William Way Communty Center. “You have places like the Mazzoni Center now that helps the trans community immensely and Action AIDS, Philadelphia FIGHT and there’s TIP that are all helping the trans community.”

Transway is a weekly event at which the transgender community, non-gender conforming groups and allies can meet up to share experiences at the William Way Center. The group meets every Thursday at 7 p.m. to 9 p.m. 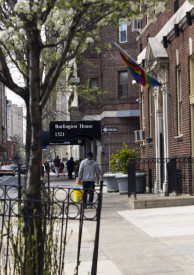 Similar to Transway is Evolutions, a weekly meetup group run by Julia Gottlieb that is held at the Mazzoni Center every Thursday, right before Transway, from 6 p.m. to 7 p.m. The group concentrates on transgender issues and support in every aspect.

Gottlieb describes Evolutions as, “A place for folks to explore their gender identity and also just to manage the oppressions that people face in society from changing presentation and gender and being non-gender conforming.”

Gottlieb also speaks highly of another of the Mazzoni Center’s programs, Sisterly L.O.V.E., Leading Others Via Education.

“It’s a collective that they do outreach and events monthly,” Gottlieb said. “It’s for women of trans experience. It’s a great way to be part of the community.”

Sisterly L.O.V.E. a group that supports the Trans* Wellness Project at the Mazzoni Center and specifically caters to transgender women, holding meetings that are not open to the public so that women in the trans community can confide in each other and talk in a private and safe space.

Murdock notes that there are now many resources available to the trans community.

“You can find help, you can get help, where before you didn’t have any of that,” she said.

“We have a ton of workshops,” said Murdock. “It’s not just for trans people. It’s open for allies and anybody else who wants to come.” 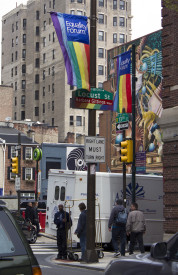 Although there are more transgender support groups and resources available nowadays, many still find that the level of visibility that the transgender community has in comparison to the other communities under the LGBT acronym is still not equal.

The transgender community is constantly growing somewhere else – on the Internet.

“I want people, not just in Philadelphia, to feel safe and be able to go to a space and talk about their identity,” Gottlieb said. “There are really great communities online. So if somebody doesn’t have a support group that’s within driving or walking distance to them, there are certain chat groups and websites that they can go to.”

Some of the websites Gottlieb recommends are wehappytrans.com and Laura’s playground.

“A combination of all [of the transgender programs] is what’s helping the community, it’s no one in particular group or anything,” said Murdock.

The key to helping the transgender community, according to both Murdock and Gottlieb, is more awareness generally of the plight of transgender people and more tolerance and less discrimination as well as a place for members of the community to feel safe and comfortable in their own skin.

– Text, video and images by Susan Dong and Amber White.

As the birthplace of the U.S., Philadelphia holds the history of William Penn, Benjamin Franklin, Thomas Jefferson and many others. These people stood on the front lines of making a change, not necessarily in battle, […]

Intersecting at 13th and Locust streets, the rainbow crosswalk represents more than lesbians, gays, bisexuals, transgenders and queers. It embodies the boundaries and obstacles crossed and overcome by the LGBTQ community in Philadelphia. In neighborhoods across the […]

During the Obama administration, federal guidelines released called on public schools to allow transgender students to be able to choose the bathroom facility according to their self-professed gender identity. On Feb. 22, 2017, President Trump’s administration notified the U.S. […]