Mike McKee took to the basement stage of the First Unitarian Church with his Philly-based punk band Kill the Man Who Questions for the last time on April 21st, 2002.

Like many church staffers, McKee is not a Unitarian. This is a caveat that may seem strange  on the surface but becomes clear when considering the first principle of Unitarianism, which places value on “the inherent worth of every person.”

This principle could also explain the church’s willingness to host all manners of punk and alternative concerts.

Matt Miceli, the building superintendent, believes the Philadelphia Unitarians have a fundamental characteristic that has allowed the shows to persist for so long. Miceli is also not a member of the congregation.

“I think open minded is the one word that rings true throughout the whole congregation,” said Miceli. “Unitarians are kind of based in that. Just allowing everyone to use the space, bringing anyone in who wants to come in regardless of their religious background or history. Everybody’s welcome.” 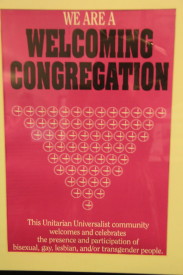 Since the mid ‘90s, Philadelphia’s First Unitarians have allowed Sean Agnew’s R5 Productions to rent space for his concerts. The most vaunted events are the punk gigs that take place in the church’s balmy, sweat-logged basement but the church’s sanctuary has also been utilized. Artists ranging from Jello Biafra to Joanna Newsom have performed in the same space that hosts the church’s Sunday mass.

While McKee doesn’t believe that one-off punk shows in church basements are rare occurrences, he does believe that R5 and the First Unitarian Church have fostered a unique partnership.

“What is unique about this space is that it’s an on going almost programmatic relationship, where it’s very conventional,” said McKee. “We expect these shows to happen and they expect our space to be available to them. And of course that works out great for everybody, as well as the larger community.”

Before the church opened their basement doors to the likes of Ink and Dagger, R.A.M.B.O. and a plethora of other Philadelphia punk stalwarts, many in the underground community had to explore alternative means to run all ages concerts.

According to McKee, a group of Philadelphia punks that referred to themselves as The Cabbage Collective spearheaded this movement.

“Kids were interested in music and were interested in creating a space that was a little more welcoming, and a little more interactive and participatory than the average commercial venue where you paying a lot to get in the door,  and you’re paying four dollars for a water,” said McKee. “So they were creating very different things, starting in West Philadelphia at the Cavalry Church at 48th and Baltimore. Their shows were very intentional. People were bringing food. There would be discussions between the bands. They were trying to create some sense of community, where people felt ownership of this music.”

But unfortunately, this venture was short lived. After the Cavalry Church stopped running shows, Philadelphia concertgoers were again left with a dearth of all-ages venues. And many touring bands would choose to bypass the area.

“Philadelphia’s reputation outside of the area was sort of like the backwater,” said McKee. “You’d have bands play New York and they’d skip down to DC. And while people were doing shows at houses – in their basements, there were certainly a lot of things missing. Particularly what was missing was that mid-sized show with more than 40 people in a basement.”

This situation was remedied when members of The Cabbage Collective, along with Sean Agnew, stopped by the First Unitarian Church to see if their basement was available. At the time, the church’s business director, Norman Fouhey, was looking for new sources of revenue and was more than happy to have them.

Today, punk shows at the church carry a certain mystique. But those close to it believe that the room itself has very little to do with it.

“I don’t think there’s anything super particular about the actual room,” said McKee. “I could tell you some details that would bore you about the original wood that’s down there. But in the end, it’s the room that’s available. I think that in and of itself it’s a special thing because this is the room people know is there. It’s the space that’s available for people to carve out their own little hive.”

“It’s one of those things where a venue gets a reputation,” added Miceli. “Punk bands want to play the basement of the church. It’s really just a three-foot stage in a church basement but people like it.”

– Text, images and videos by David Zisser and Jacqueline Nelms.

Years of planning and hard work went into the creation of the newly opened Venice Island Performing Arts and Recreation Center in Manayunk. An outdoor craft market of about 60 start-ups, home businesses and other do-it-yourself ventures, Philly [continue reading…]

Arts and Entertainment: A History Of Acceptance At The First Unitarian Church

On any given afternoon, a whole slew of activities will be taking place at Philadelphia’s First Unitarian Church. Renters at the church include two daycare operations, an adult wrestling club and a girls charm school. [continue reading…]