A classic punk-rock band with snarky attitude, The Dead Milkmen finally began performing again this year. Kicking off with just a few precious gigs in sight, lead vocalist and keyboardist Rodney Anonymous got the band together for 2014’s first live performance at the Laurel Hill Cemetery, right off Kelly Drive.

“Why not play here? We’ve got a built in audience,” Anonymous said, as he gestured to the deteriorating gravestones. 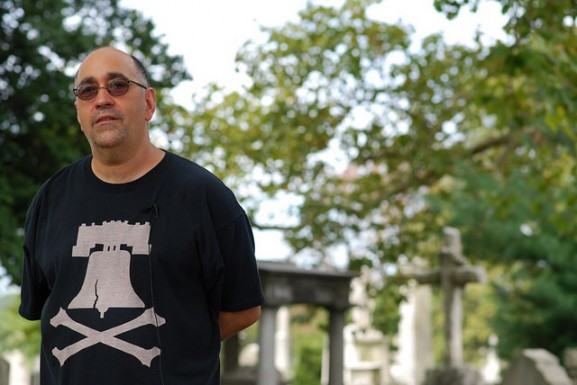 Anonymous expected to only sell about 200 tickets but, much to his surprise, over 500 tickets were sold.

“No pressure,” he jokingly added.

And while the band may have gotten its start in the early ’80s, there were concertgoers conceived well after their first self-released cassette, Living Death in the Cellar of Sin.

“It was fun to relive our youth – see people we haven’t seen in years, see kids dressed how we used to,” said Ryan Golden, a longtime Dead Milkmen fan. 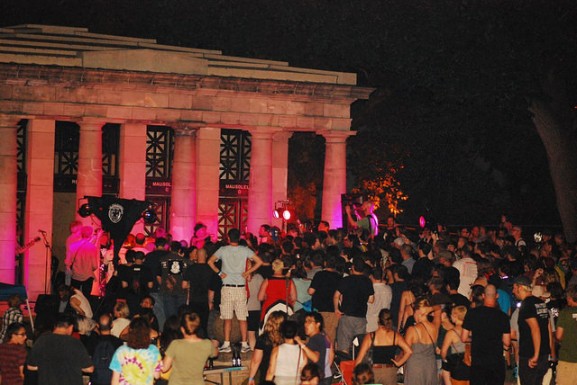 But the band has been keeping busy. Its most recent commercial success lies in the credits of a popular Netflix series, Orange is the New Black, which aired one of the group’s most popular songs, Bitchin’ Camaro. On top of that, Anonymous mentioned two more upcoming shows in late October: one in Baltimore and the other in Lancaster. In addition, they’ll be releasing a new video for one of the songs off their latest album, Pretty Music for Pretty People.

“It’s going to look like a German expressionist film and it’s shot in Tennessee, which we don’t have to be in. It’s wonderful,” Anonymous said, and mentioned how they now outsource their music videos.

The album was reviewed by punk aficionados of Punknews.org, which noted its upbeat tempo, but omitted the highly synthesized notes.

“I’m glad we have this on record, because I’ve been trying to explain to people how the record takes place in an alternative universe,” said Anonymous, as he continued to explain the album’s blatant tone opposing bubble gum music.

He kept the answers vague and open to possibilities when asked about the band’s future endeavors. He stated the only thing for sure was that he plans on taking a long nap after the performance. But there’s a small silver lining for Dead Milkmen fans: Anonymous talked about a ritual of Sunday songwriting he picked up from a friend in the band Angelspit, which has given him a backlog of material to use in case of an untimely incident.

“Even if one of these obelisks falls on me, the band has enough stuff, just from me, to continue on,” Anonymous said.

https://vimeo.com/22939618]   What would you do if you weren’t able to find where your daughter had been buried the other day because the rain had erased all of the marks of a new grave? The [continue reading…]

Mike McKee took to the basement stage of the First Unitarian Church with his Philly-based punk band Kill the Man Who Questions for the last time on April 21st, 2002. Today, he’s the church’s communications [continue reading…]