For music outside of the mainstream, record stores have always served as a destination to discover and network. Metal and punk music is being played at many venues in the city such as Kung Fu Necktie, The First Unitarian Church and Union Transfer. It is not uncommon to see bands stopping in local record stores to promote their shows and fans searching for their new favorite album.

Sit & Spin Records, located down the street from the Italian Market at 1346 S. Ninth St., caters to lovers of alternative music.

“Punk and metal music is not on the surface, it’s an underground community,” part owner and manager Leora Colby said. “You have to dig a little deeper in order to find it. To be able to walk into a record and see flyers, demos for local bands, you can easily connect to the scene and community.”

With the ability to stream and digitally download music, it may appear that the idea of a record store is out of date. The number of musical units sold in the United States has decreased by nearly fifty percent in the past eight years. Despite this, Colin McMahon, part owner of Sit & Spin Records, believes physical product still has value.

“With record stores, you get a personal experience,” McMahon said. “You can hear a lot of stuff you never would have otherwise just by talking to other customers. With punk and metal, the record never really died out like it did with mainstream music.”

McMahon went on to highlight the relationship that he has with people in the punk and metal scenes in the city.

“To a certain extent, I think it all intermingles together,” McMahon said. “A lot of bands and label representatives will stop in to promote their stuff. I feel that there is definitely a level of accessibility that we have here for people looking for this kind of information.” 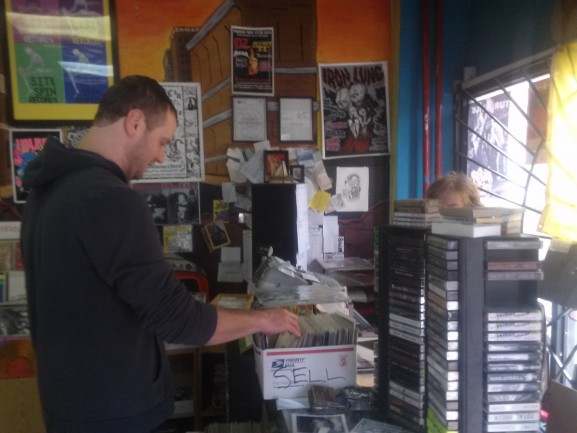 One of those people is Richie Charles (pictured above), founder of the locally based Richie Records. For the past ten years since his label’s inception, Charles has been going around throughout the city to promote his product.

“I’ve found Sit & Spin to be one of the most welcoming for new music,” Charles said. “Also, Philadelphia Record Exchange and Long In The Tooth have been supporters as well.”

For the past twenty years, Charles has been shopping in Philadelphia record stores. He sees the benefits of the local record store from the perspective of a label owner and customer.

“It has always functioned as a meeting place,” Charles said. “There are still hundreds of bands who are unaware of what I do and vice versa. Whenever I come in I always check out whatever local music is available, and maybe my stuff finds its way into their hands.”

With the changes in music consumption that Pandora and Spotify have brought, collecting physical musical product still remains, with little variance in the process from years ago.

“In the ’90s, if you wanted to hear something, you had to have a tangible piece of music to explore,” Colby said. “Going into a store growing up, you had to start with the stuff that was easy to find. If you picked up a Black Flag or a Circle Jerks record, the store clerk would point you in the direction of more contemporary punk that was coming out.” 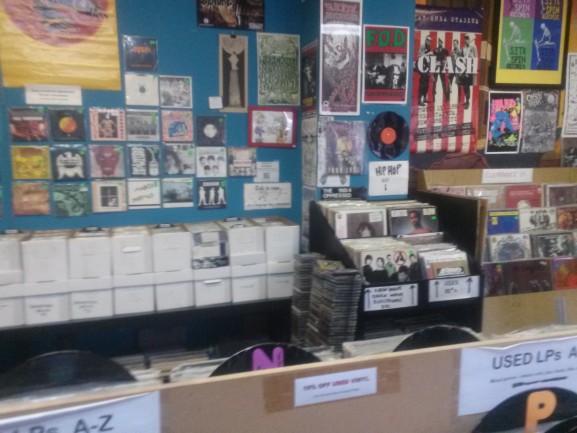 For fans of any kind of alternative music, the promotion is largely done by word of mouth. Colby believes that even with the advent of the Internet, this is something that won’t go away.

“We have kids come in after school and they’ll ask about new and old records, and who’s playing in the city,” Colby said. “For this type of music, that information has never been broadcasted easily and it’s not easy to find. Now that I have a store of my own I have an opportunity to plant those seeds for people who are interested and don’t know where to look.”

Eric Teofilak, guitarist and vocalist for The Dolts, a punk band that has played for several years in the city, agreed with Colby about the social aspect of Sit & Spin Records. He feels it is one of the best shops for people interested in the punk and metal scene locally.

“Sit & Spin has one of the best collections in the city for this type of music,” Teofilak said. “I think it’s awesome because it’s an actual physical place you can go and always run into people from the local scene. There’s a portion of it that’s only online, but this gives you a place to make connections.”

It is unclear whether record stores like Sit & Spin Records will expand the city’s punk and metal scenes to the levels of other metro cities in the 1980s and 1990s. Regardless, these establishments serve as a central place for people to converse and discover new music. With alternative music of all types gaining popularity in the city, these stores serve an important role in spreading both the physical product, and the social promotion of the scene.

https://vimeo.com/75887874] The Tiberino dynasty has established an ongoing legacy in Philadelphia. As a familial collective of artists, they  have worked together to combat social issues and raise social awareness through their art. Most recently, that [continue reading…]

From an early age Shana Kennedy knew she would join the circus. The Natick, Massachusetts native acquired a love for performance while visiting traveling shows that stopped in her town each year. By age 15, Kennedy had acquired her [continue reading…]