It’s called 95 Revive, a project currently being conducted by the Pennsylvania Department of Transportation. The plans involve improving and rebuilding I-95, its bridges and interchanges. A major sector of the project includes reconstructing and relocating Richmond Street, a main corridor through Port Richmond.

The initial design for the entire multi-phase project began in 1999. Comprised of five projects, the 95 Revive plans are just starting to unfold and are not scheduled to be completed until 2023. One of those main projects is the Girard Avenue Interchange (GIR), which is then broken up into six separate projects. The construction on Richmond Street is all apart of Section GR1, the second phase of the six.

“The total cost of the Girard interchange when all is said and done is almost a billion,” said Elbich.

According to PennDOT, the reconstruction and widening of the Girard Avenue interchange will provide a better management of traffic coming off I-95. The average daily traffic volume on I-95 in the area of the Girard Interchange is 160,000 vehicles a day. Previously, there were limitations on the interchange that inhibited a steady flow of traffic due to the height of the Conrail bridges. PennDOT has plans to fix this issue so all vehicles can have unrestricted access.

“In the past it was hard for trucks to get down the street, the drivers wouldn’t gage the height and hit the bridge and would have to back up and turn around,” said Harold Windisch P.E., PennDOT’s senior construction engineer. “We are raising the height on the Conrail bridges which will allow more trucks carrying supplies to reach businesses along Richmond Street.”

In total, the Girard Avenue Interchange will include the construction of approximately 44 bridges, 15 retaining walls and 40 arterial Dynamic Message Sign (DMS) structures. The interchange is said to allow easier access into Port Richmond from the city. PennDOT says they constructed its plans of Richmond Street with the community in mind. There are several ideas set in stone that will make Richmond Street a safer roadway for pedestrian traffic.

“With Richmond’s relocation, we were able to incorporate pedestrian scale lighting and a drainage system, which will allow us to create a greenscape under I-95,” said Elbich. “We wanted to create a better access to the waterfront for residents. They will be able to walk up and down the corridor to Pulaski Park or south to Penn Treaty Park.”

PennDOT hopes to bring the community together in order to create the ideal space for the residents of Port Richmond. One idea PennDOT has in mind is to have residents help construct a few murals, which are to be displayed along Richmond Street.

“At the end of the street on Lehigh there will be a mural that residents will have input on,” said Elbich. “One mural we are planning on is to bring the river closer with wave patterns and circles and bubbles. As soon as we are reaching the completion of Richmond Street we will ask for input on these murals.”

Jack Flanagan has been a resident of Port Richmond for more than 30 years. He has seen the many transformations of I-95 and is excited to see PennDOT’s plans to construct a greenscape and bike path under I-95 unfold.

“It’s something growing up that I never had,” said Flanagan. “I used to bike up Allegheny Avenue and Delaware Avenue with all the traffic and it wasn’t safe. If everything goes according to plan it will look really good.”

Although PennDOT’s plans are said to be beneficial for those traveling to and from the city in the future, it is currently making it nearly impossible for local neighbors and business owners on Richmond Street to go about their daily lives.

Joe Petaccio is a Port Richmond resident and owner of three businesses on Richmond Street. For Petaccio, the remodeling is causing nothing but havoc.

“A lot of our customers that have known us for years will spend the extra time trying to get to us, but because of all the construction and traffic, new customers are getting lost and just saying the heck with it. They end up going somewhere else,” said Petaccio.

Petaccio feels as though his custom t-shirt shop, JP Tee’s, is being affected the most.

“I know for a fact that we lost three orders due to the construction,” says Petaccio.

Besides dealing with immense amounts of traffic and congestion, dust has also become a huge problem resulting from the construction.

“There used to be a four foot wall going down the parking lot and they ripped it out. So now every time a car drives by it’s like we’re in a dust storm,” said Petaccio.

The dust is also affecting customers migrating out to Richmond Street.

“I own Sam’s Water Ice on the corner. We can’t stay open because no one wants their ice cream and water ice covered in dust and mud,” said Petaccio. “Everything is just filthy and dirty.”

Petaccio’s brother, Jason, not only works on Richmond Street, he lives there also.

“My brother has a pool and every morning there’s a film of mud over it,” said Petaccio. “Everything gets covered in dirt.”

Besides all the dirt and traffic, all the vibrations from the construction are causing cracks in the foundation of the buildings along Richmond.

Residents understand that PennDOT’s plans for the street are beneficial for the future, some just have a hard time believing that the area underneath I-95 will transform the way PennDOT’s engineers think it will.

“I don’t think it’s realistic,” said Jason Petaccio. “This place used to be covered in heroin needles. It was a place drug addicts came to shoot up. I don’t think you can come in and renovate it and then expect no graffiti or anything.” 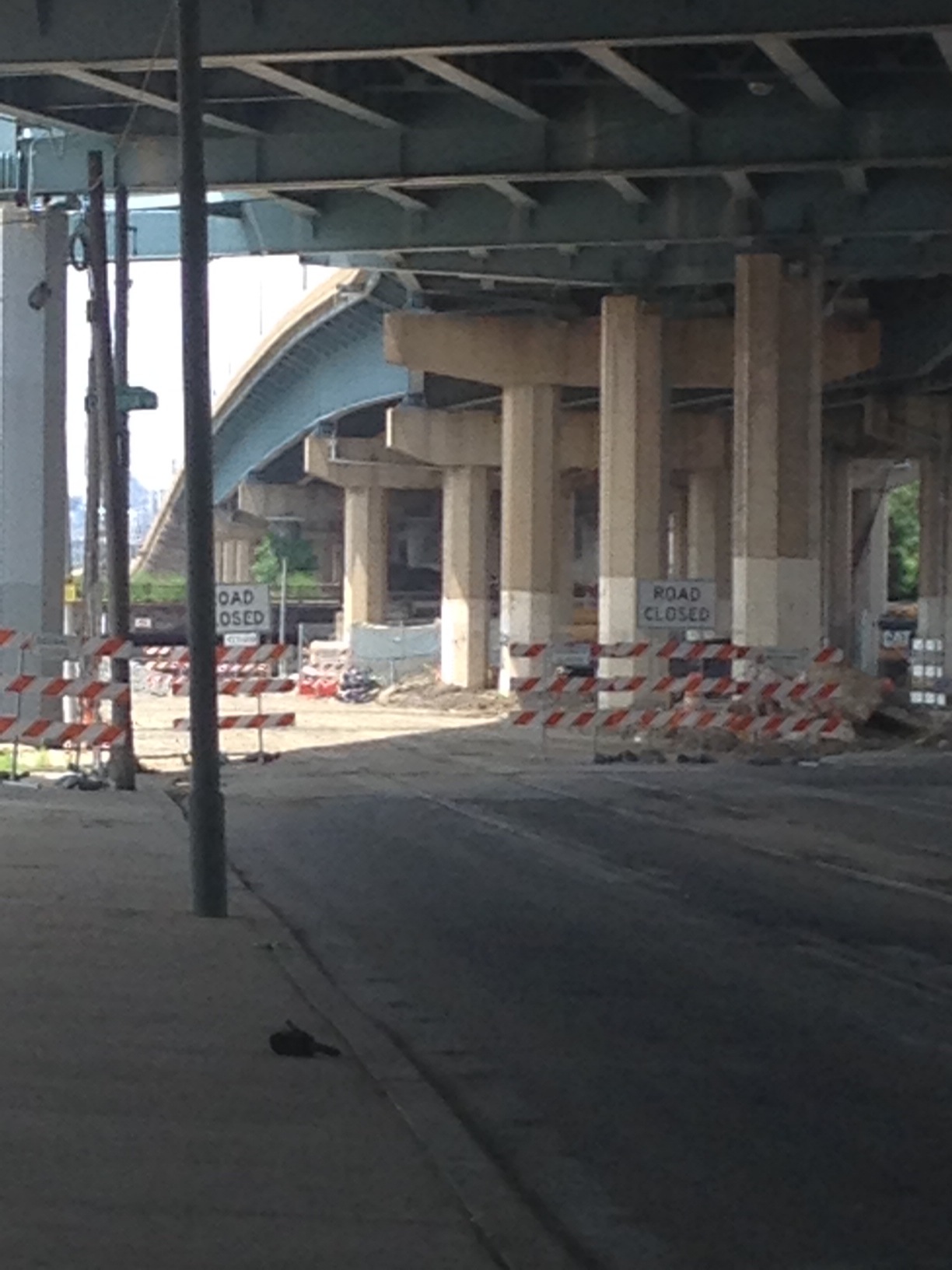 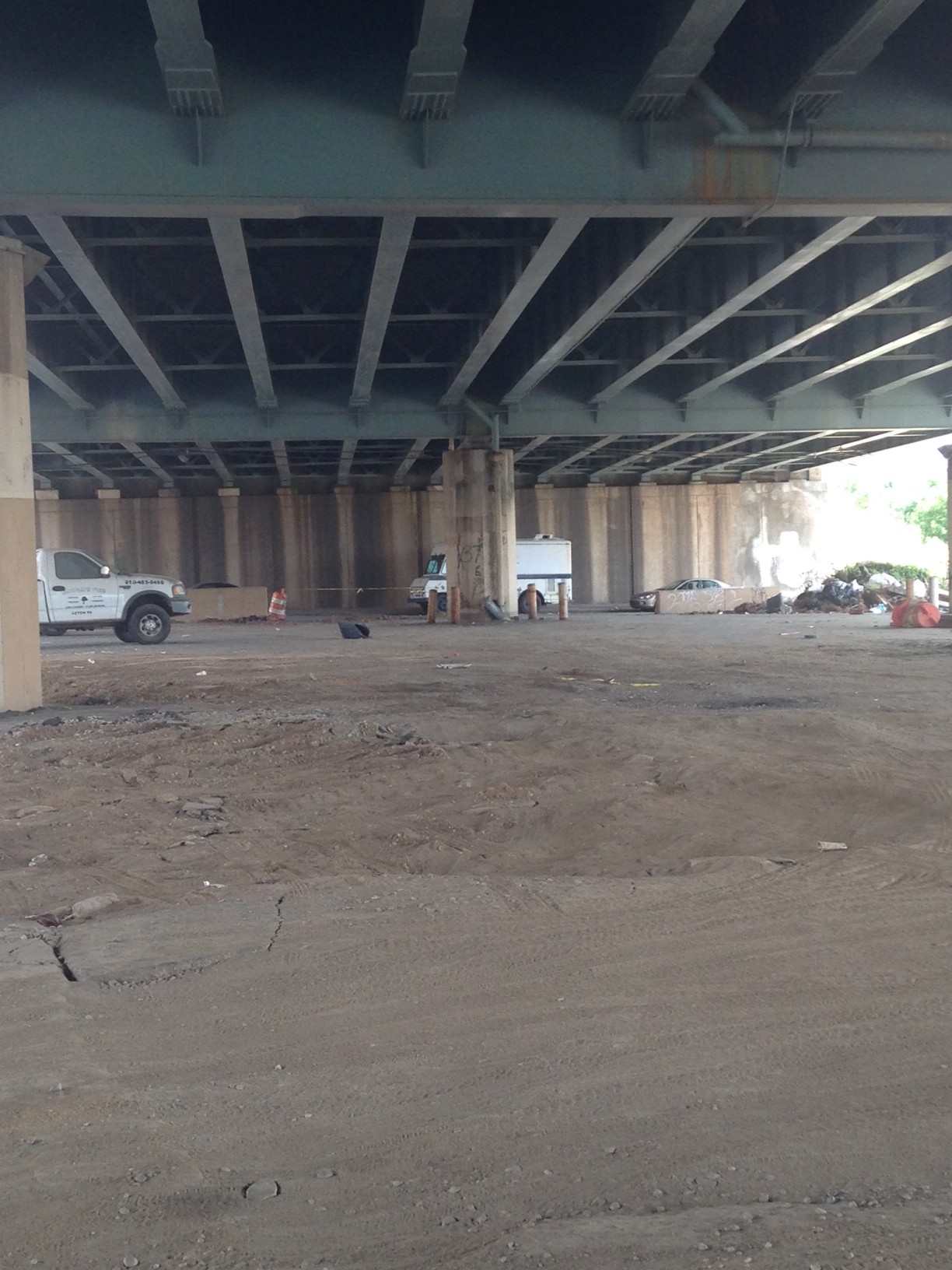 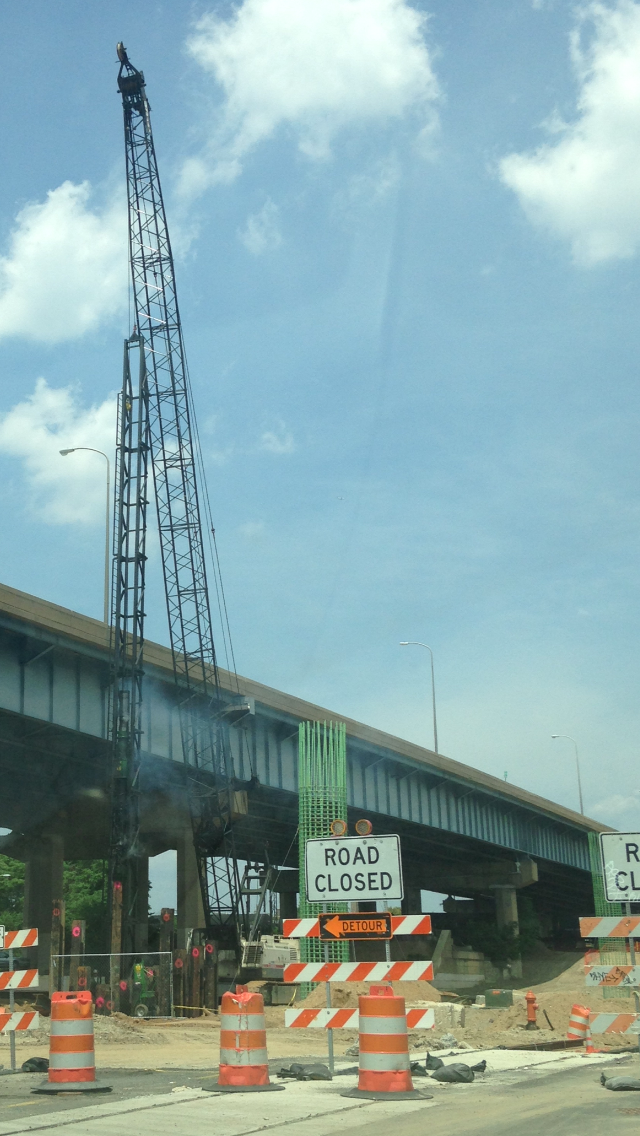 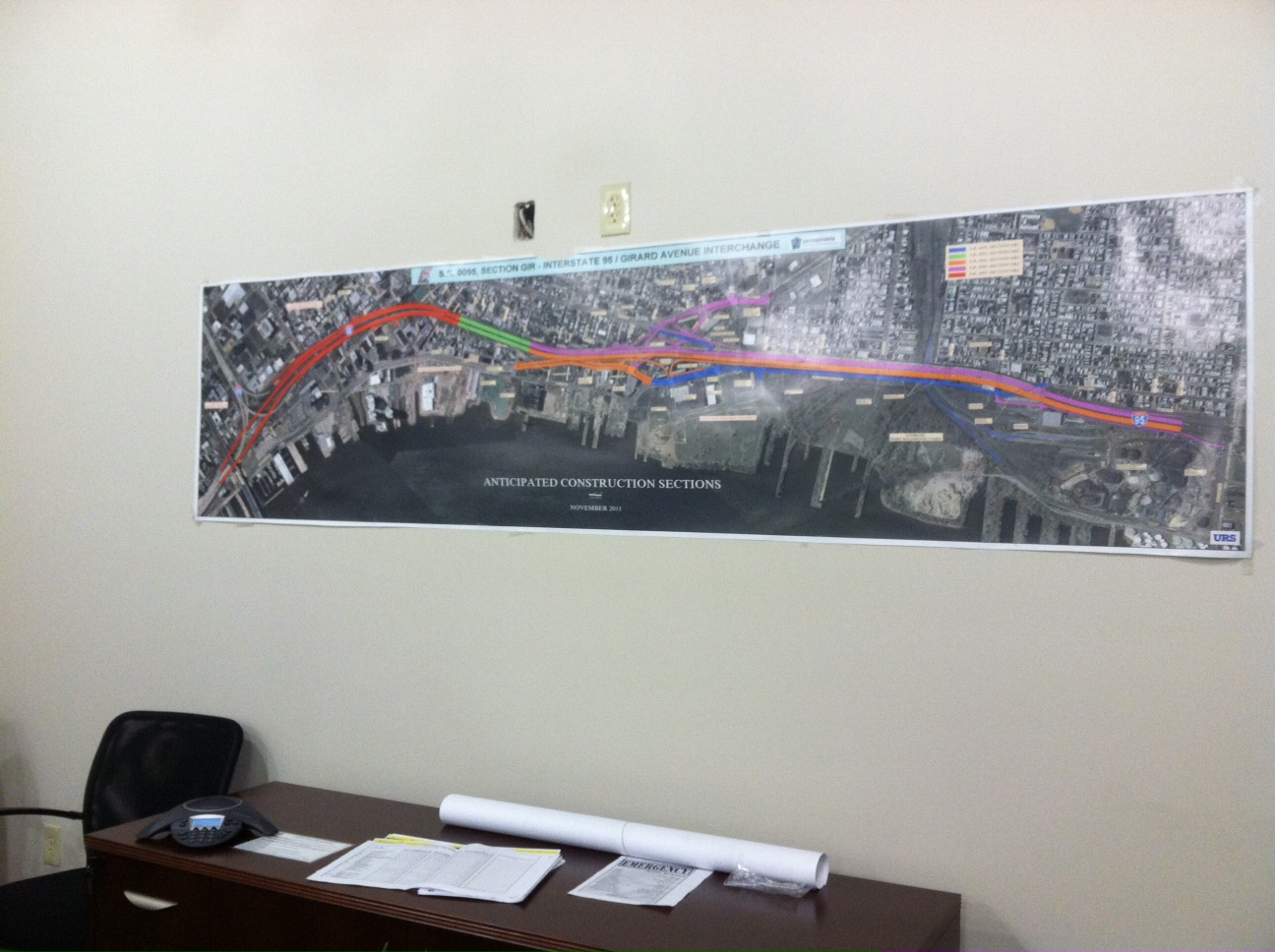 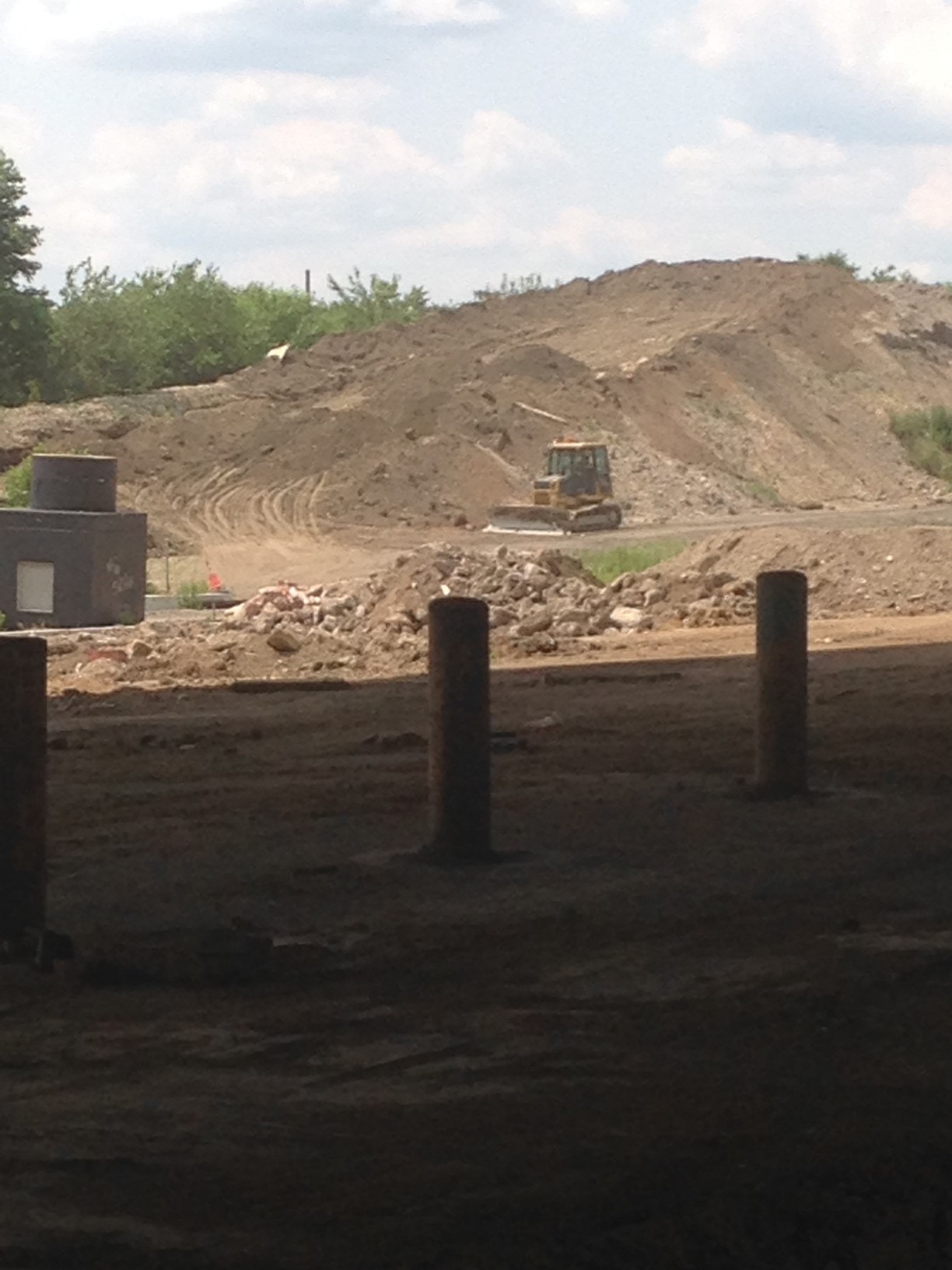 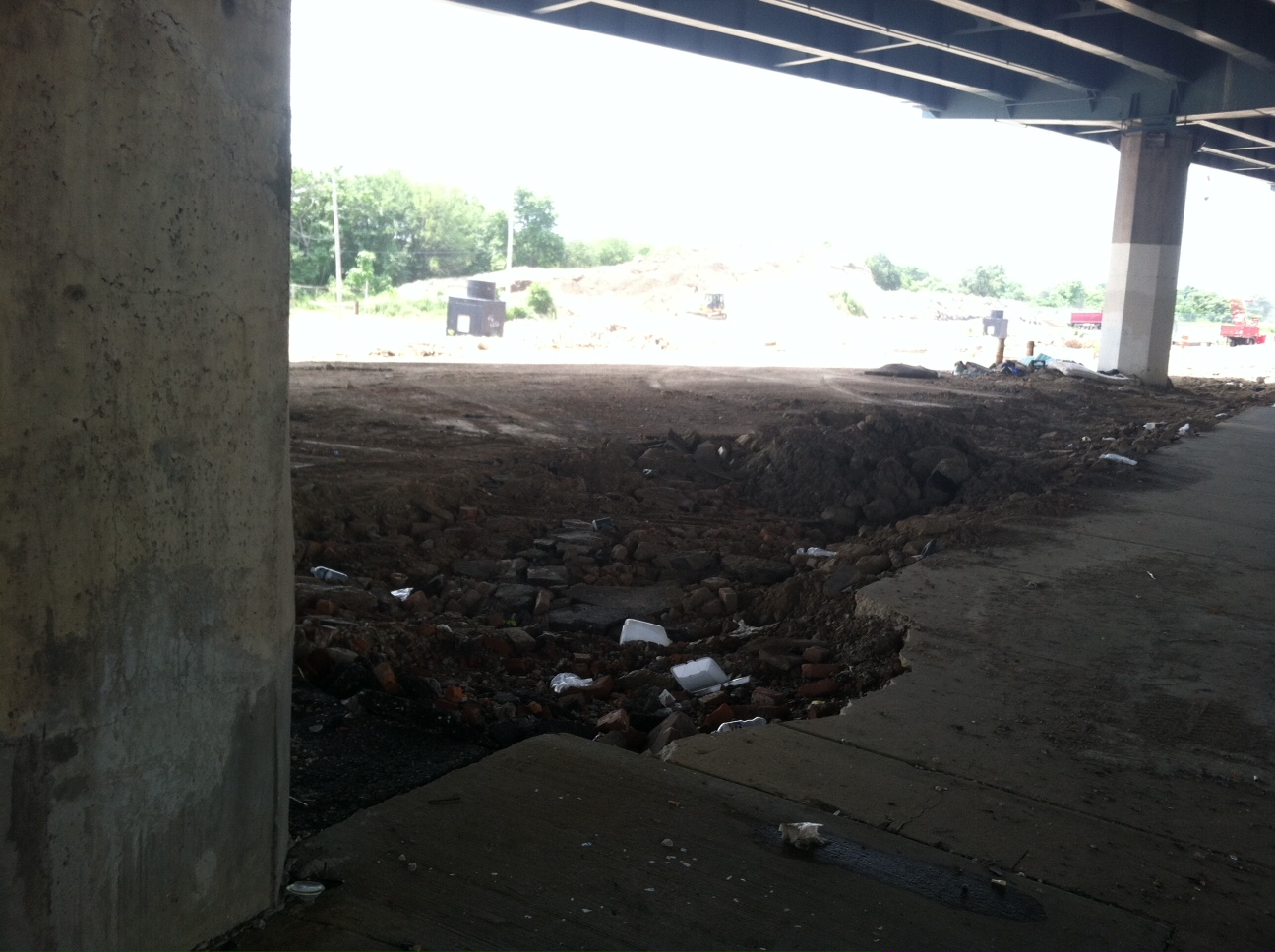 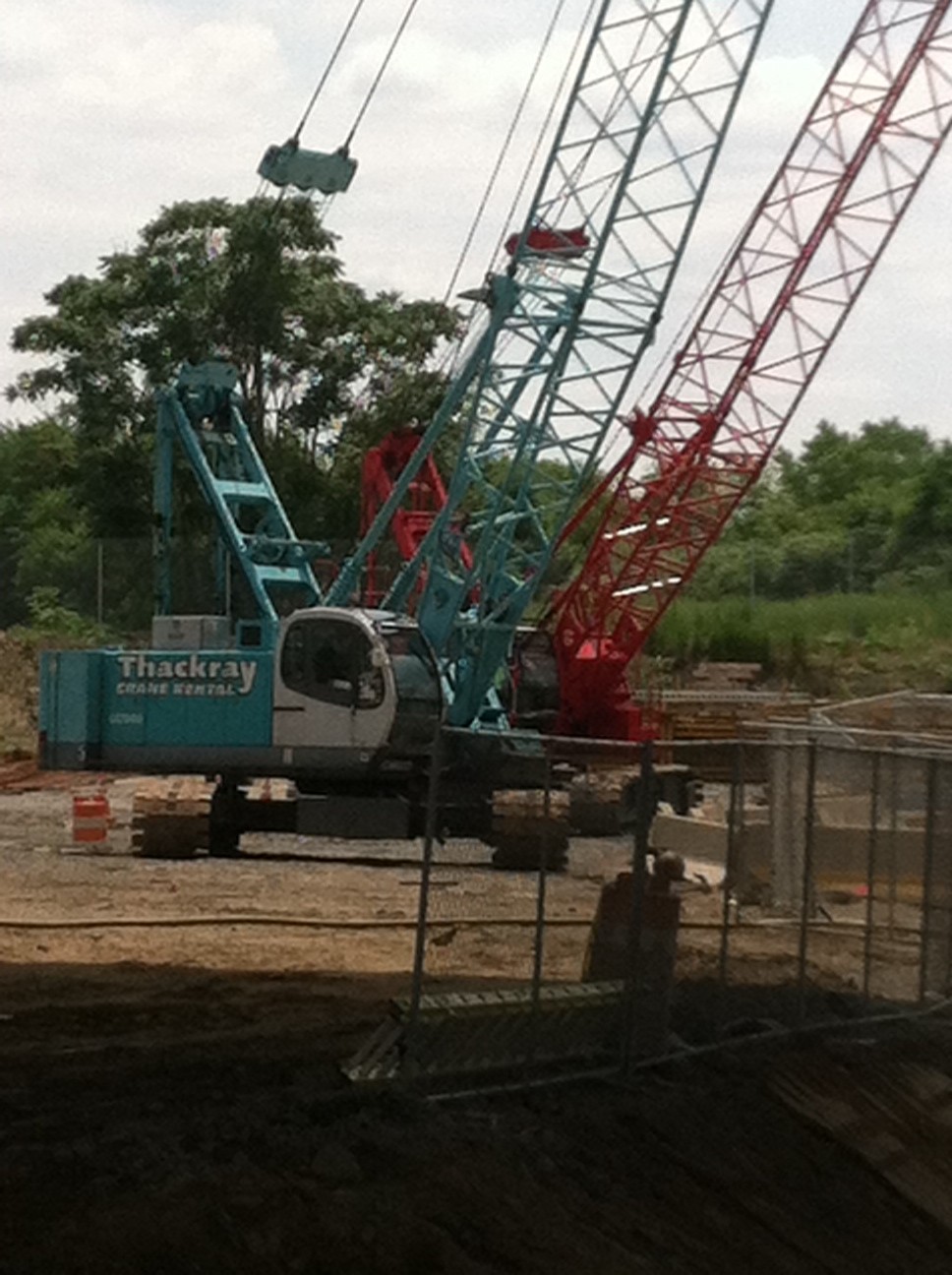 <
►
>
Wide shot of the massive amount of dirt and dust underneath I-95.

“I’ll believe it when I see it,” said Marge Petaccio, mother of Joe and Jason Petaccio and employee at JP Tee’s. “I have to walk to work now. There’s nowhere to park, and you really don’t want to park along this street anyway. Everything is a mess.”

Although Port Richmond resident Dan Gallagher is annoyed by all the traffic in his neighborhood, he agrees that the I-95 reconstruction is necessary.

“I do believe that it’s a necessity,” said Gallagher. “It’s a total pain right now, but I do think that it needs to be done.”

In the end, Flanagan believes PennDOT’s engineers have devised a valuable plan that will positively affect the Port Richmond and Philadelphia community.

“It’s progress, it’s what should be done and somebody is going to benefit from it,” said Flanagan. “Nothing happens overnight. If PennDOT goes about it the right way, which they are, it is going to be a great thing for the community, especially for generations to come.”

For up to date information about road closings on this project go to PennDOT’s 95 Revive website.

– Text, video and images by Angelise Stuhl and Catherine Palmer.

2011 marks the 50th anniversary of the Leprechauns Sports Association, which has provided a variety of sports for local youths in Port Richmond to participate in. Nearly 300 athletes between the ages of 7-18 participate [continue reading…]

Once upon a time the ‘River’ was the favored destination for waterside relaxation. “Everyone remembers days on the river. We didn’t need to go to the Jersey shore, that was our beach,” Patty-Pat Kozlowski told [continue reading…]