Rain or shine, South Philadelphians will rarely pass up the opportunity to go to a beer festival.

On October 11, the Crafts & Drafts Festival came to Pennsport for a neighborhood block party on a bone-chilling autumn day. The event tookplace on the 200 block of Sigel Street, in front of Moonshine, a bar and restaurant which opened in November of 2013. 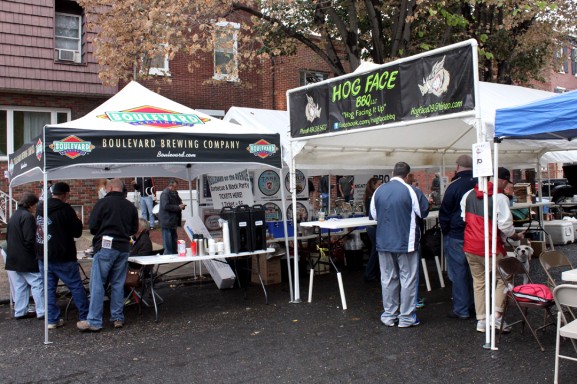 Boulevard Brewing Company, a craft beer company from Kansas City, Missouri, teamed up with the bar to hold the big party.

With the smell of Hog Face BBQ in the air and the upbeat music of the talented New Sounds Brass Band (below), the party was vibrant, contrasting the dreary day. 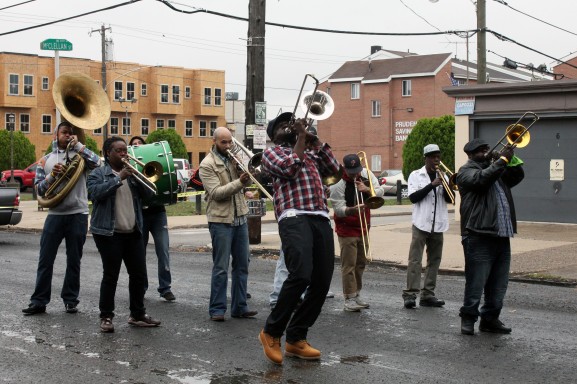 Rich Fattori, one of the co-owners of Moonshine, knows the benefits of neighborhood block parties. Disappointed with not being able to participate in one last year, Fattori wanted to make sure Moonshine was an integral part of this craft beer festival. 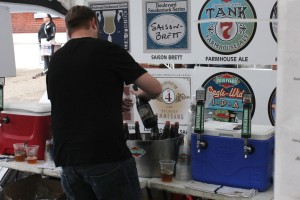 “The neighborhood has been phenomenal,” Fattori said. “They have embraced us more than I thought. So, really, any success we have had is thanks to them. Today, I’m excited about introducing Boulevard Brewing Company to the area. I feel like there was a stigma behind craft beers a few years ago, people in this area were like, ‘No, I don’t drink craft beers.’ But, just like country music, they give it a shot and you know what, they’re like, ‘This isn’t so bad.’”

Neil Witte, one of the managers from Boulevard Brewing Company, came to Philadelphia from Kansas City for the launch event of the brand in Philadelphia. Although not from the area, he could see that Philadelphia was a major beer drinking city.

“We have a pretty vibrant beer scene in Kansas City as well,” Witte said. “Philadelphia is obviously a bigger city. There are more people here and more breweries, so it’s hard to compare the scenes exactly.”

Megan Maguire, the market manager for the region, was thrilled to be a part of the local event since she lives in the neighborhood.

“It’s a real celebration of craft beer in Pennsport,” she said. “We are bringing craft beer to this neighborhood that is coming alive. It really just shines a light on the region.”

The festivities didn’t only include beer and barbeque but a few other attractions to suit anybody’s interests. On one corner stood a giant bounce house for kids, as well as a face painting station. Little Baby’s Ice Cream offered an alternative to the barbeque with their own mobile stand and Smak Parlour, an Old City boutique, had its fashion truck at the party for people to browse and shop. 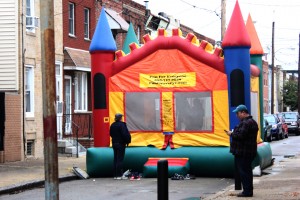 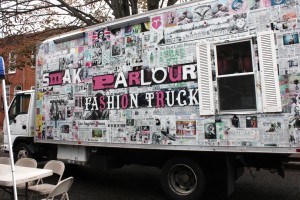 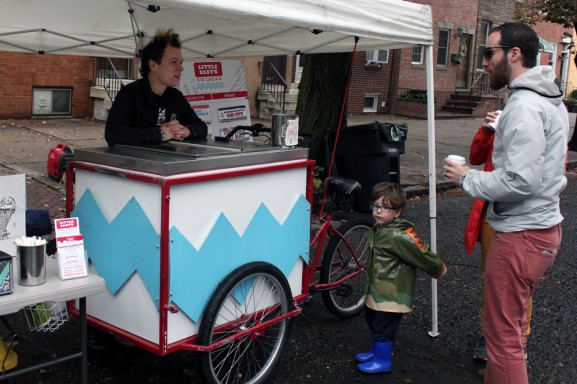 Looking around at children with butterfly painted faces and ice cream running down their red hands, the colder weather didn’t seem to be a problem. Along with the beer and barbecue, raffles and games made the event a truly well-rounded community event for the whole family. At the root of the event, however, the focus was on the popular, and still growing, craft beer scene in the city.

“This is an amazing craft beer city,” Maguire said. “The best craft beer drinking city in the country, hands down. They like everything. It’s not just local, it’s everything. They appreciate beers from other regions, other areas in the county and even the world. Philadelphia embraces that.”

-Text and images by Chelsea Finn and Monica Miller.

South Philadelphia: On the Road to Safer Streets for Cyclists

An estimated 4 percent of commuters who live in South Philadelphia ride their bike to work, making it the most popular biking community in the city, said Sarah Clark Stuart, campaign director for the Bicycle [Read More]

“Want more hot sauce?” Nestor Morales asked. “The green one is really hot.” Morales, a repeat customer, ate his chicken tacos from the metal ledge built along the side of the Taco Loco food truck [Read More]