Combining fast-paced skating, hard blocks and nights filled with entertainment is what the Philly Roller Girls do best.

Since its launch nine years ago, the Philly Roller Girls have been looking to give flat track roller derby a home in Philadelphia.

Flat track roller derby, developed in 2001, is comprised of two teams with five players on each team at a given time. Each team designates one player as a jammer while the remaining players form the pack.

The object of the sport is to have jammers fight their way through the pack to score points while skating around the track in a counterclockwise direction. Jammers look for spaces to skate through created by their own teammates while simultaneously dodging blocks from the opposing team.

Jammers earn one point for each member of the opposing team they legally skate by. At the end of two 30-minute halves, the team with the most points wins the bout.

In addition to these four adult-only teams, the Philly Roller Girls host a junior roller derby program for girls between the ages of six and 18.

Maggie Garrity, from Roxborough, joined the junior roller derby program after attending a Philly Roller Girls event at the University of Pennsylvania’s Class of 1923 Arena in May.

“My mom wanted us to go look at roller derby,” the 7-year-old said. “We never heard of it so we were excited. We [ended up] loving it so when my parents heard about junior roller derby, they signed me up.”

The junior roller derby team practices each Sunday morning during the season for two hours at Millennium Skate World in Camden, N.J.

Juniors are coached by both current and retired members of the Philly Roller Girls.

Maggie counts her instructors, Grim Reber and Quazi Mojo, as her favorite players. In just a few months, these players have taught her enough to “scare” her father.

“Maggie hadn’t skated until about three months ago,” Chris Garrity said. “In three months, she’s become fast enough to scare me and has even learned how to skate backward.” 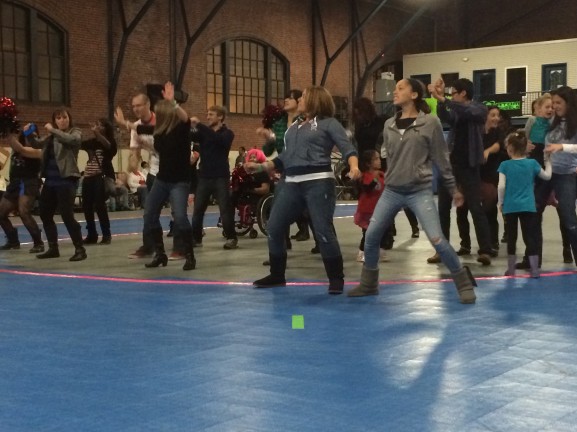 “I don’t think I’ve ever met more inclusive, welcoming, non-judgmental people,” he said. “[Roller derby] is an activity without a lot of the negative stuff from other sports. You still get the joy of competing but will never see [coaches or parents] screaming at a kid.”

Though flat track roller derby can be a dangerous sport, the Philly Roller Girls work hard to make each event fun and family friendly.

Team members not playing in the bout hold various contests during halftime to keep the fans entertained. It’s not uncommon to see the team’s cheering squad—the Fearleaders—get the crowd up and moving for dance contests (see above).

Dale Urban, a union painter and the Philly Roller Girls’ unofficial mascot (see below), first discovered roller derby five years ago and has since been to almost every bout.

“I always tell people [unfamiliar with the Philly Roller Girls] about how the girls are very athletic and how they actually play for the sport,” he said. “They play for the love of the game. They don’t play for the money, fame or glory.”

In fact, the team is made up of all volunteers. While two Philly Roller Girls teams are scheduled for a bout, members of the other teams work throughout the event selling raffle tickets and merchandise while answering any questions the audience may have about the sport of flat track roller derby. 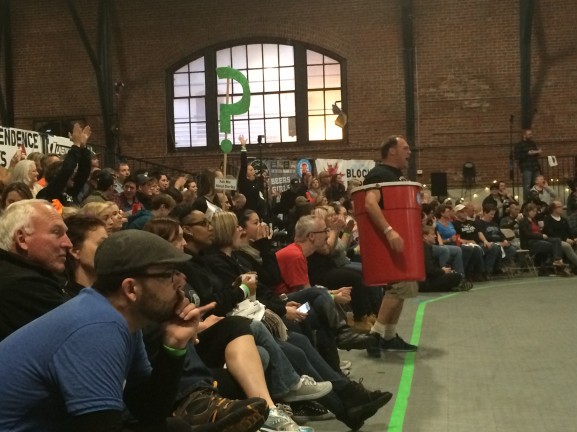 According to the Women’s Flat Track Derby Association (WFTDA), there are 273 different member leagues around the world. The current rankings were decided June 30 with the Philly Roller Girls finding themselves ranked at 12th in the world.

At the most recent Philly Roller Girls double-header – called Knocktoberfest – Block Party faced off against Suburbia Roller Derby (of Westchester County, N.Y.) before the Independence Dolls went head-to-head against the Brandywine Roller Girls (of Downingtown, Pa).

Block Party dominated Suburbia with an impressive 235-102 victory, while the Independence Dolls narrowly fell to Brandywine 181-170 after commanding much of the bout.

The 2014 season is winding down for the Philly Roller Girls with just one bout remaining Nov. 9, when the Independence Dolls play a yet-to-be-determined opponent at Millennium Skate World.

-Text and images by Anthony Bellino and Ashley Dougherty.

Amateur Sports: Roller Derby Shows No Signs of Slowing Down

When reminiscing about the storied sports history of Philadelphia, roller derby isn’t exactly one of the first things that comes to mind. Despite its turbulent swings in popularity, the sport’s history in Philadelphia dates back […]

The concept of connecting with neighbors has become something of an urban myth in modern living, which revolves smartphones and computers. But in the hustle and flow of everyday life, certain organizations, like the Newbold Neighbors […]