The Richmond Bottle Shop is encouraging Thriftway customers to add one more item to their grocery list by offering more than 750 varieties of beer and cider.

Located inside the grocery store, the new area is divided by a small partition and a special entrance. Rules like this were necessary to transform the small space into a dining area.

“It’s a restaurant with a beer license. We wanted to produce an atmosphere that portrayed that, ” said general manager Don Petzak. “In the end though, it’s just a nice place for people to enjoy themselves.”

Offering a selection of hot foods alongside the domestic and international brews, customers are encouraged to enjoy a few drinks and relax at one of the many tables set up and divided from the rest of the market. 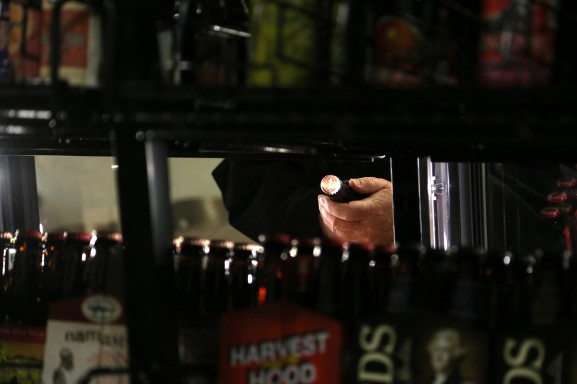 “People are surprised when we tell them to sit down and enjoy a few beers right here,” employee Saul Kramer said. “We welcome people all the time and the ones that do always tell me how great this is.”

Being set up in the grocery store actually produced many challenges for the lucrative idea. Pennsylvania law allows only restaurants, bars and distributors to sell alcohol.

By adding on-premise consumption, tables, food selection and a separate entrance, Richmond Bottle shop was able to categorize itself as a restaurant and separate entity from the Thriftway.

“Everyones asking for this obviously,” Petzak said. “With the recent law attempts to bring in beer and wine to grocery stores, it was a unique opportunity to give the people what they wanted.”

In adherence to the strict language produced by the Pennsylvania Liquor Control Board, many stores are capitalizing on this loop-hole in the categorization of their separate entity.

Wegman’s found itself facing the state Supreme Court after the Malt Beverage Distributors Association questioned the legitimacy of five licenses acquired to sell beer by the bottle and in six packs. 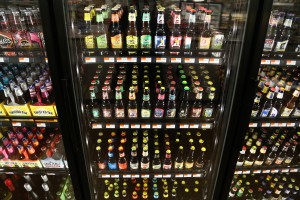 Wegman’s won the case and set a standard for setting up private bottle shops in grocery stores. It was a victory for the consumer.

“I’ve been all over the country. Other states have beer in grocery stores,” Fishtown resident Chamung Unkow said. “I’m 45 now and they expect me to wait till I’m old and gray to get [beer] at a market.”

The three-month renovation gave a great sense of satisfaction to the loyal customer.

“My bank is here. My favorite soup is here,” Unkow said. “Now I can get all that and my beer. It’s all about convenience.”

From here, front end manager Jason Butterline hopes to see the store really generate a lot of success. They plan to hold a beer tasting and Hatfield beer brat party to celebrate the opening.

“Everybody loves it so far,” said Butterline. “But the real measure will come in the long run. It’s going to be really interesting to see how successful this will be.”

The mix of dedication and connivence is what brings people back to the bottle shop over other shops in the area.

“Theres enough beer drinkers around to make this demand realistic. It’s the proper thing to do,” said Unkow. “I told the guy on the first day, now you’re thinking.”

– Words and images by Andrew Thayer and Patrick McCarthy.

Opened eight years ago by a Temple University graduate, the Olde Philly Pharmacy at 2923 E. Thompson St. has been fulfilling prescriptions, and providing home deliveries, for the people of Port Richmond since day one. [continue reading…]