For two years now, Philadelphia Superintendent William Hite has had heightened concerns in regards to whether Philadelphia public schools will begin classes as scheduled at the start of the academic year, or if increased layoffs and budget cuts will be the best way to ensure that schools open on time.

Currently, officials claim the school district is projected to face a nearly $80 million deficit for the upcoming 2015-2016 school year.

As a result, among the first to get axed throughout the years have been the arts education programs. But as budget cuts continue to grow and more arts programs are nixed, many schools, or individual teachers, have turned to outside organizations for partnerships to make sure arts education still remain apart of the learning atmosphere.

An organization that has built an ongoing relationship with a few Philadelphia area schools is South Philadelphia based 1812 Productions, the city’s only all-comedy theater company that holds performances at Christ Church Neighborhood House Theater. Founded by Jennifer Childs and Peter Pryor in 1997, 1812 Productions was created in response to statistics that suggested of how little people laughed in their daily lives.

“When people are laughing, they’re open, and when they’re open they’re ready to have a real conversation,” Childs said about how her and Pryor have used humor and comedy in their teachings since 1812’s inception.

Their outreach program, 1812 Outreach, has partnered with South Philadelphia High School and the Widener Memorial School for 15 years, as well as Benjamin Franklin High School for the past three years.

[Watch the video above to hear Living Arts Dance Studio’s story – another organization with an outreach program.]

When 1812 initially reached out to principals and teachers about attending their production “The Complete Works of William Shakespeare,” a South Philly High teacher reached out saying she would love for her students to come out and see the play but they couldn’t afford it. As Childs relentlessly sought out a way for the students to attend, she allowed them  to see the play for free.

After she received positive feedback from the teacher and students, 1812 created a South Philly High discount.

“South Philly High students could show up five minutes before the show,” Childs said. “If there were any tickets left, they would get them for free.”

The following year, 1812 Outreach began teaching a few classes at the high school. They were happy with the response they received.

“It went so well,” said Childs. “There was a real need there for that kind of education. Since then, we‘ve developed a relationship with other teachers at that school and we have been there pretty much steadily with year-round programs.”

1812 Outreach was also utilized in the classroom of Roberta Emmanuel, English and drama teacher at South Philly High. The ongoing relationship helped expose Emmanuel’s students to live theater up close, an art form many students hadn’t witnessed before.

“1812 has the attitude that they want to be involved, they want to help,” Emmanuel said. “They want to do whatever they can to help the students.”

Their engagement with the students has even led some to study theater in college. 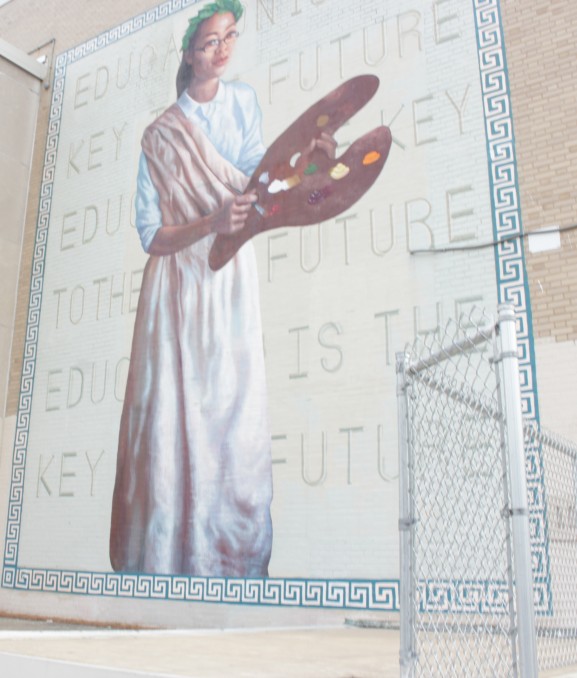 “Through the years, 1812 has certainly met the need of arts education as budgets cuts have reduced arts programming in the district,” said 1812’s education director Marla Burkholder.

As students are bombarded with technology and become bored with the traditional classroom setting, 1812 Outreach constantly keeps students on their feet. They laughed, became increasingly engaged and were “learning without realizing it,” said Childs.

“It’s a different energy for them,” Emmanuel said. “It’s not the same energy that I would have and I like that part of it.”

At one point 1812 Outreach attempted to expand its program into five different schools, but they quickly realized that the students, teachers and principals weren’t as engaged in the program as they had hoped.

“Most of what we do is not about putting on a show,” Childs said. “It’s really about working with teachers to fill alternative ways to fill out their curriculum.”

Though the 1812 Outreach program is not very big, it has had an enormous impact on the students it has reached. However, 1812 Outreach will not consider expanding unless there is an organic connection between their organization and teachers.

But educators, like Emmanuel, have really seen the need for these types of relationships.

“As educators, we always want outside providers,” Emmanuel said. “We can’t do it all. Anything the community can do to assist us, I look forward to.”

Story by Mary Olivia Kram Ben Bass has been a professional actor for the past decade and, over that time, has become accustomed to hearing the same backhanded compliment. “We see that you’re very talented, [continue reading…]

The Center for Emerging Visual Artists (CFEVA) is holding its annual Philadelphia Open Studios Tour (POST) throughout October. For the first two weeks of the month, visitors can get a behind-the-scenes look at the work [continue reading…]