Ben Riesman and Catherine Birdsall are finally satisfied with the endless amount of work and money they have poured into the Maas Building – a project they have been working on for six years.

The couple bought the building in 2008 for $420,000, according to city property records. At the time, the structure – which had been the Charles Maas Brewery in 1859 – was an absolute wreck. They have since converted the space into a local arts and cultural center that doubles as a three-story home for their small family.

When Riesman and Birdsall found it, the building was used as storage space for an architectural salvage business. They lived in what they called a junkyard for about a year. Still, they saw something more within the 6,840 square feet space.

Riesman recalls a time when the building resembled a barn more than anything else, with mountains of junk, pigeons in the ceiling and holes in the roof.

“Instead of buying a house and recording studio potentially, we bought this crazy building and then we expanded our vision and wanted to do something else with all of the other space,” said Riesman. “We kind of grew into it. We had this vision – it was a lot smaller and it was more modest – and then we definitely dove in way over our heads. We always say that we would have never done that again had we known how much work it was, but we’re kind of over our hump now.” 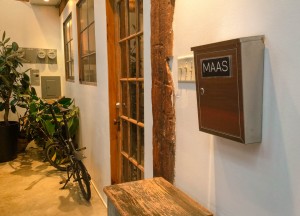 Birdsall interjected, “We didn’t have plans to buy anything like this. The place kind of sparked our imagination and it inspired us to do what we did here, more than the other way around.”

Currently, Riesman devotes all of his time to the building. He is the hands-on manager of the place he and his wife have helped revive. He now also runs a recording studio that was only recently completed. However, he still remembers times during construction when things were more hectic.

“I’ve had to explain it to people who were coming to record with me, like, ‘Watch out for the scaffolding, you can set up right there.’ So I kind of worked with some brave souls in the last few years, and now it’s done so I’m kind of excited to take it to the next level,” Riesman said.

Another part of his job description, however, includes being the on-call event director. Some of the events Riesman and Birdsall host include baby showers and weddings.

“A lot of people – whatever their event is – if they have people coming from out of town, it usually comes up that [the building] is very Philly, people from out of town will see what Philly is about,” Birdsall said.

Birdsall believes that people who say this are referencing Philadelphia’s industrial past, which is intentionally reflected in the building’s exposed brick walls and pieces of train tracks left over from when the building was a trolley repair shop.

Ultimately, however, Riesman and Birdsall do not want the Maas Building to be known as a place for weddings. Instead, they want it to serve as a cultural entity for the immediate neighborhood and the arts community.

“With the construction in the back, we just passed our final inspection,” Riesman said. “So finally after six years, we actually have finished all of the major pieces of construction, and the immediate plans are really just to get my studio running and kind of to start doing these cultural events.” 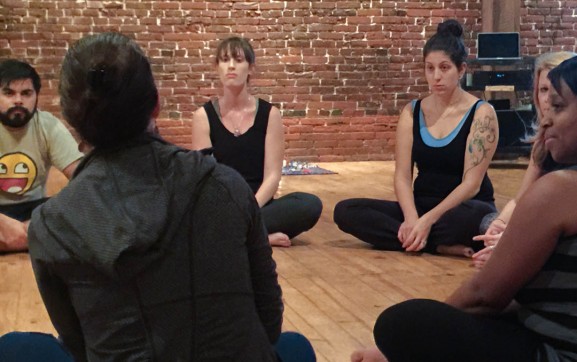 In the long run, Riesman hopes that they can apply to become a nonprofit organization. He says, however, that this is not financially affordable at the moment. Even so, the building does help serve the neighborhood. He believes that the diversity present in some of the classes offered in the Maas Building directly mirrors the diversity present in the surrounding neighborhood.

“I think it’s a real benefit to the neighborhood – it’s bringing people in and it adds some vitality to the street,” said Inger Hatlen, the managing director of New Paradise Laboratories and the first tenant in the Maas Building. “Sometimes you can get that kind of gentrification tension with neighbors, but I haven’t really felt that and I’ve felt that the neighbors are really welcoming and it’s been a really positive experience. Now the neighborhood is a mix of residential and businesses and schools and, you know, kind of what Philadelphia is like.”

Joshua Barbosa, who lives across from the Maas Building, agrees with Hatlen about the effects of the revival of the building on the community and that the building has helped improve the neighborhood.

“The building is nice and clean,” Barbosa said. “It’s a good building.”

Located at 1320-22 N. Randolph St., the Maas Building has about 2,700 square feet of public space that includes an arts space and small-scale event hall, plus private offices for permanent tenants. The rate for rentals is available on the building’s website.

Mantua has a thriving art scene that is constantly growing, expanding and finding new ways to connect with the community. Listed below are five places where artists and residents have come together to create positive influences throughout [continue reading…]

On a brisk Sunday evening, an advertisement reading: “Hand Car Wash $5.00,” stood at the intersection of 19th Street and Cecil B. Moore Avenue. Gregory Smalley, the service’s founder and only employee, decided to take [continue reading…]

Those close to Philadelphia artist Caitlin McCormack describe her as humble, kind-hearted and talented. Though she views her self as “not good enough” and a “burden,” her peers strongly disagree. “She’s just such an incredible artist,” said [continue reading…]