The prominent Fishtown art scene has just taken a new role in engaging local residents and utilizing a green approach for a better community through the neighborhood’s very own mascot: a fish.

Throughout Fishtown, people will start to see eccentric fish head topped trashcans popping up left and right on every street corner. These trash-gobbling fish are all thanks to the Fishtown Neighbors Association (FNA) Beautification Committee and the creative minds of the community.

The fiberglass fish heads were designed by local sculptor, Eric Allen, and then sent to Cowpainters in Chicago to be reproduced as trashcan lids.

“The actual painting, the more visual design, was all the work of the individual artist,” said Jeffrey Van Osten, Fishtown resident and designer of one of the fish heads. “Each design is representative of the individual person, even though they aren’t artists in particular, everyone is an artist in this case.”

Van Osten’s design, which resembles an actual fish, was one of the 17 fish heads displayed at the FNA’s unveiling ceremony held at the New Kensington Community Development Corporation’s (NKCDC) Garden Center November 15.

“I wanted mine to look like a fish as much as it could look like a fish, like a real natural brook trout, but also with the look of a cartoon,” Van Osten said. “ I wanted to work with the actual figure and utilize the aspects that are already on it, so I didn’t actually draw on it, I drew with the dimensions of the fish head.”

Though his work shows to be more realistic, many of the fish heads depicted futuristic designs, full of bright colors and intricate details.

Among these displayed was a lively painted fish head created by members of the fifth grade at Horatio B. Hackett School.

“Our school was picked to do it and then we all had to draw our designs on paper and the art teacher picked who would design it,” said Jade Fleming, 11.

“It was just about six or seven of us that worked on this,” said Katie Plant, 10. “We came up with it by listening to everyone’s ideas and we all agreed with each other.”

While the Horatio B. Hackett School designed trashcan will go outside of the school on York Street, the rest of the first batch of the fish head topped bins will be sent all throughout Fishtown.

“Right now we only have two on Frankford Avenue, so we are trying to get them all throughout Fishtown so people catch on to the trend,” said Kristie Landry, Beautification chair and designer of a trolley painted fish head. “I hope that people will see them and then ask to have one in front of their business.”

For the businesses and schools that sponsor each bin, they are then responsible for emptying the trash and providing new bags.

“We have signs for the front of all the trash bins,” Landry said. “They give credit to each artist and sponsor and let people know this is a part of FNA Beautification.” 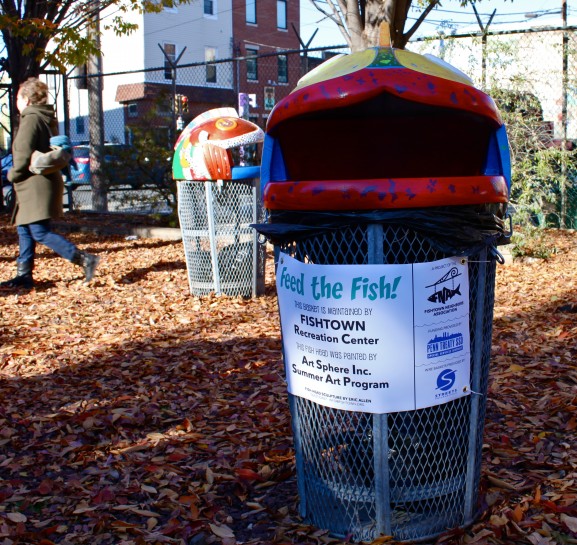 Even though the first batch of trashcans affixed with a fiberglass fish head with a gaping mouth just waiting to be fed garbage have only just been sent out, locals are already excited to see what the next set of designs will bring.

“I love street art and I think that is what these fish heads are – a form of street art that brought a community together and I love it, I can’t wait to see more of this happening,” said local resident, Mary Alice Cicerale. “It’s people banding together to make the city prettier and I hope more neighborhoods do this.”

While the eye-catching trashcans are popular among community members, will it actually work to address the overpowering trash issue that surrounds the Philadelphia neighborhoods?

“If people see beautiful art work I think they will kind of respect the world better,” said Plant.

Philadelphia is notorious for the abundance of trash on the streets and up until now, most neighborhood associations have only issued street cleanups to aid this continuing problem.

Of these, the largest cleanup in Philadelphia is held each spring through the Philadelphia Streets Department, which typically brings out more than 14,000 volunteers, according to the Mayor’s Office of Sustainability. 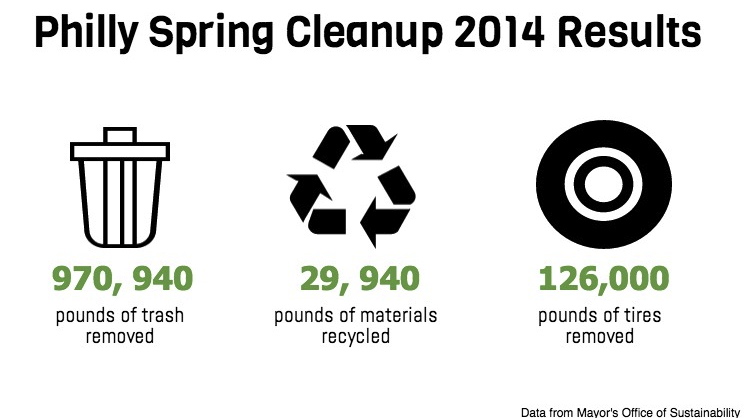 While the cleanup proves to be successful, it is not consistent. For the rest of the year, the trash sits around, building up and waiting for someone to take care of it.

Even when there are trashcans, there are not enough and they tend to fill up quickly, which is one of the contributing factors to the fish head design by serving as a lid to an open bin, preventing trash from blowing away.

In 2008, however, Mayor Michael Nutter took a step in helping to clean up trash by implementing the Bigbelly solar-powered trash compacting trashcans throughout Central Philadelphia, with a goal of making the streets cleaner, while also saving money and improving the environment.

Since then, more cans have been purchased and placed more commonly throughout populated business areas of the city, some of which even take on an artistic approach, like that of the Feed the Fish program.

According to the Mayor’s Office of Sustainability, these bins were originally purchased using a $2.2 million state recycling grant. 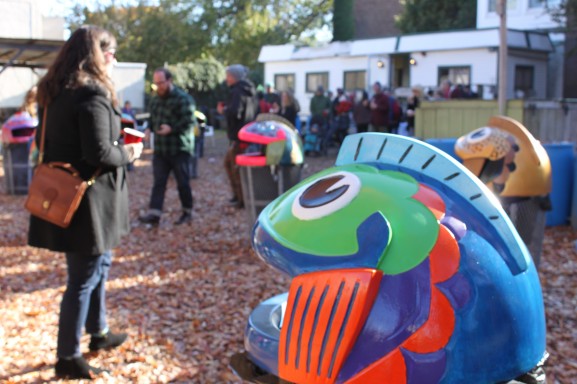 Additionally, Bigbelly predicted that over the course of 10 years since implementing the trashcans, Philadelphia would save $12.9 million, according to vice president of marketing, Richard Kennelly.

From the first year of the Bigbelly application, the Mayor’s Office of Sustainability has calculated that nearly $1 million have been saved each year.

Along with this, the Community Life Improvements Programs of the City of Philadelphia shows that the Bigbelly bins have also helped to increase recycling in the city, which is an issue that the Feed the Fish program does not necessarily address. The fish head bins are aesthetically pleasing, but do not offer the option of recycling.

If the Bigbelly bins are so beneficial and cost-effective, why are they not implemented on a broader scale throughout the city?

This boils down to the problem that litter and trash is an issue that the City of Philadelphia officials are not necessarily addressing in a proper manner, outside of the Center City District, which is why it is up to local neighbors associations to devise their own plans, just as the FNA has done.

“I just want to see people using these initiatives and I hope that from this, people don’t throw trash in the streets,” said Van Osten. “It’s important to give trash bins character and let people know they’re there to be used.”

One of the major reasons m 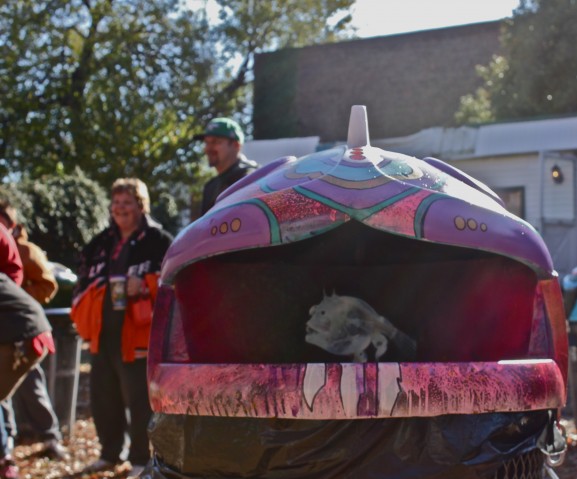 ore projects like Feed the Fish are not followed through is because of the lack of funds and grants available.

The budget for the project, which was about $15,000, mostly comes from a grant from the Penn Treaty Special Services District, which is funded through the SugarHouse Casino community benefits agreement.

“They constantly donate money to different neighborhood organizations to help with programs, just like this one,” said Landry. “None of this could have happened without everybody involved and it won’t be a success unless everyone participates and talks about it.”

Now that the fish heads have been placed, the next goal is to have an interactive map to connect the art with the community.

“Eventually on the website we’re going to have ‘Find the Fish’ for people to be a part of,” said Landry. “It’s going to be like a scavenger hunt through Fishtown to find all the different fish heads.”

With initial support for the unveiling of the fish heads from locales like Saint Benjamin, Philadelphia Brewing Company and the NKCDC, plans are already beginning for the next set of fish heads, keeping the Beautification Committee rolling to make a movement. 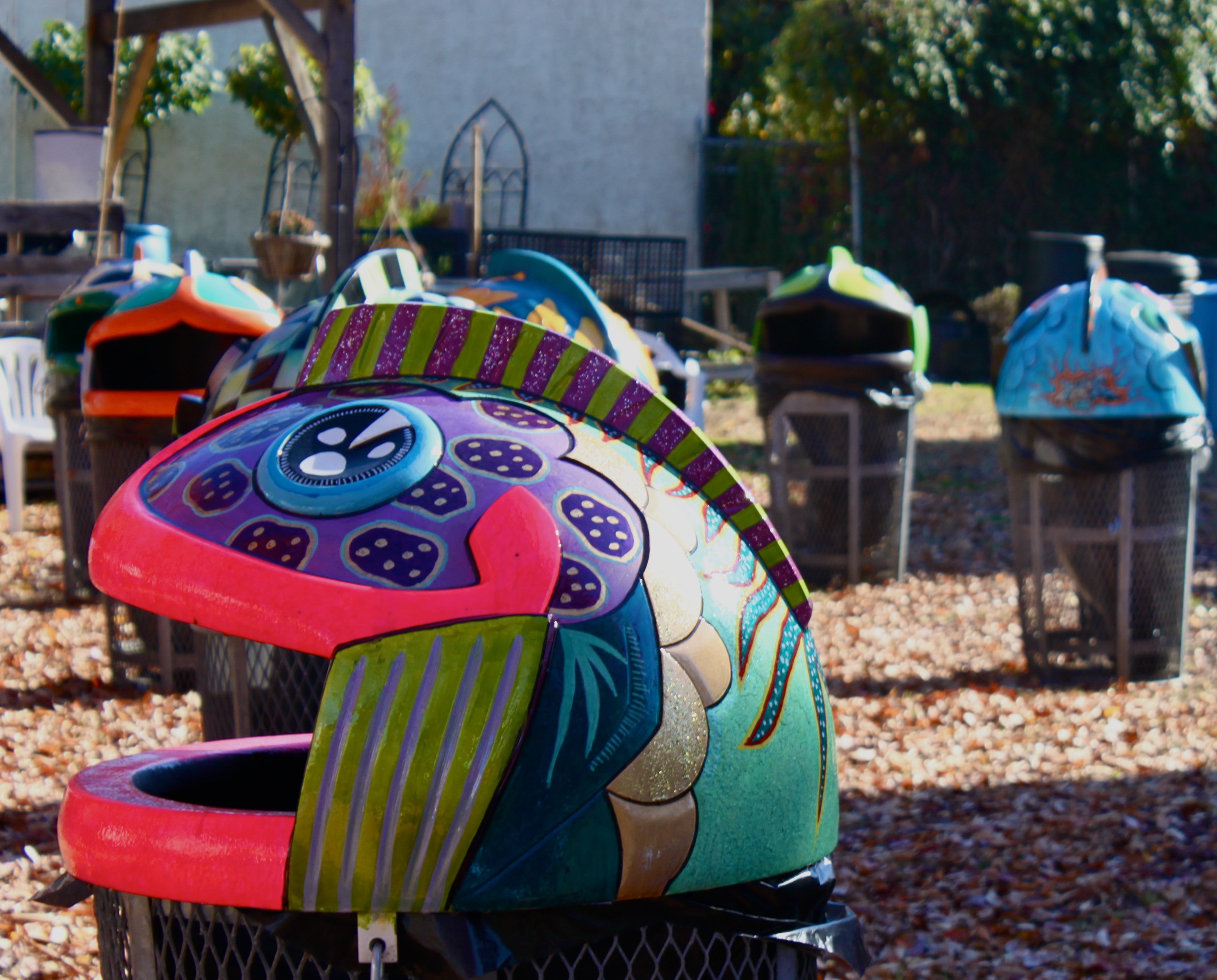 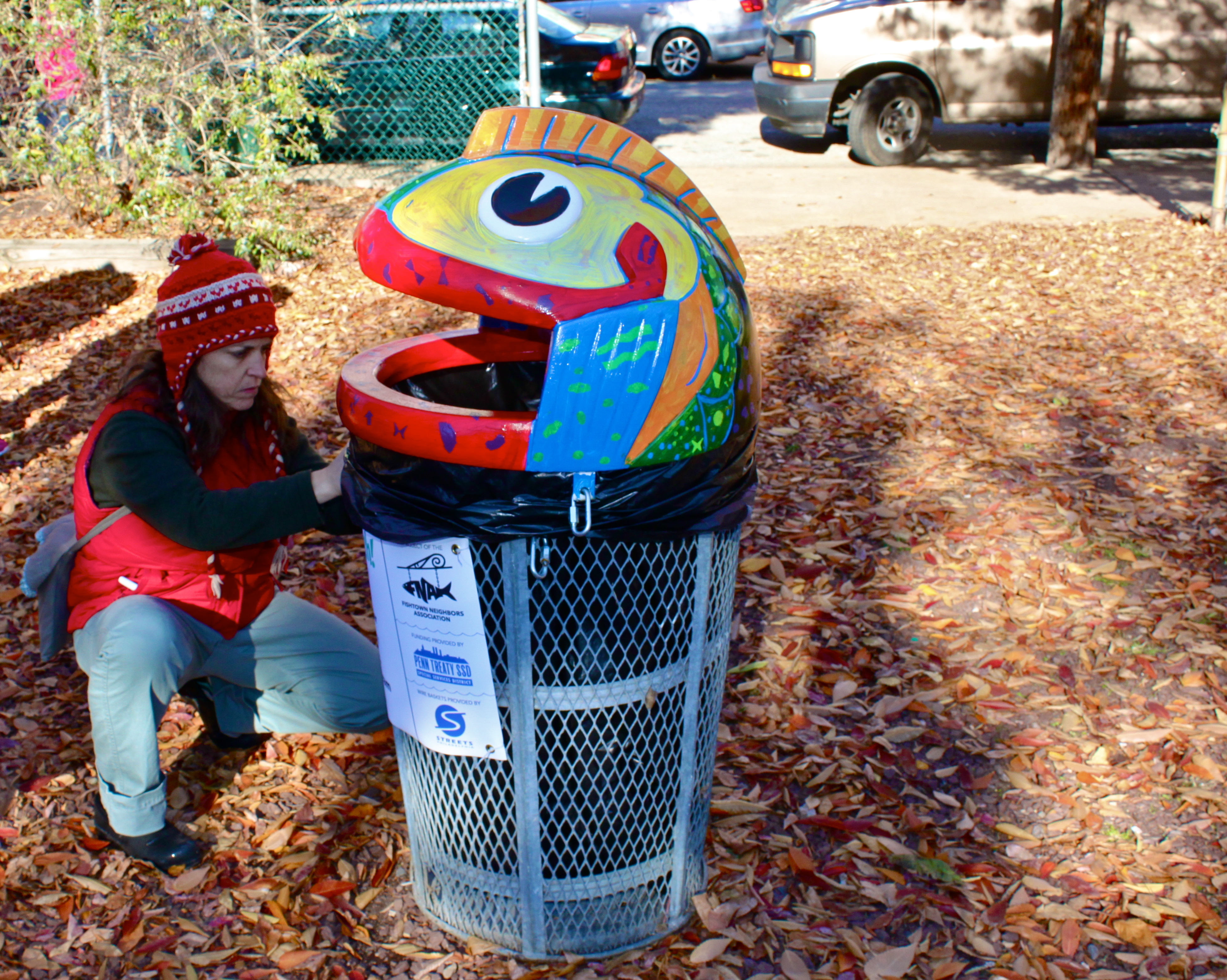 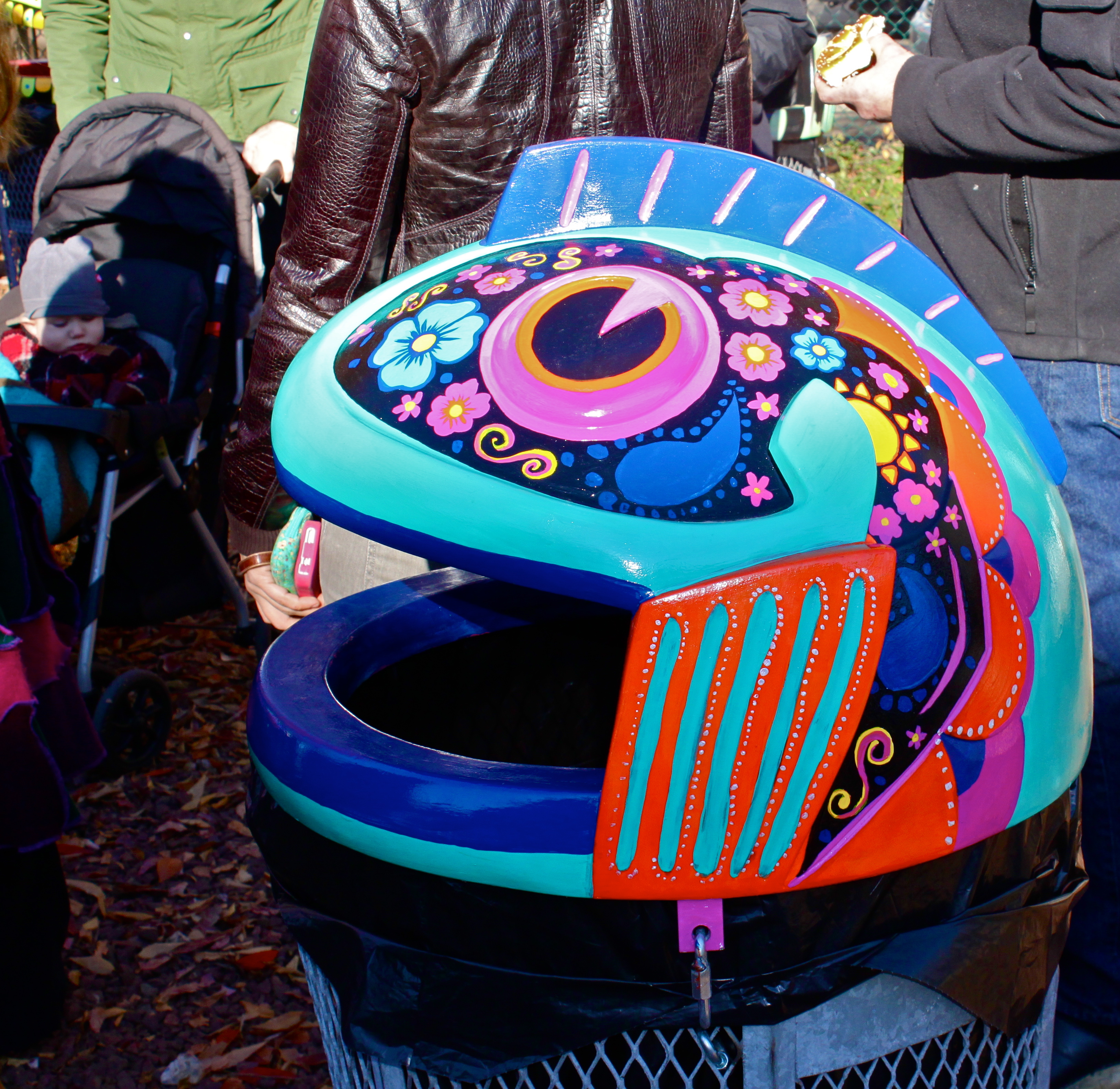 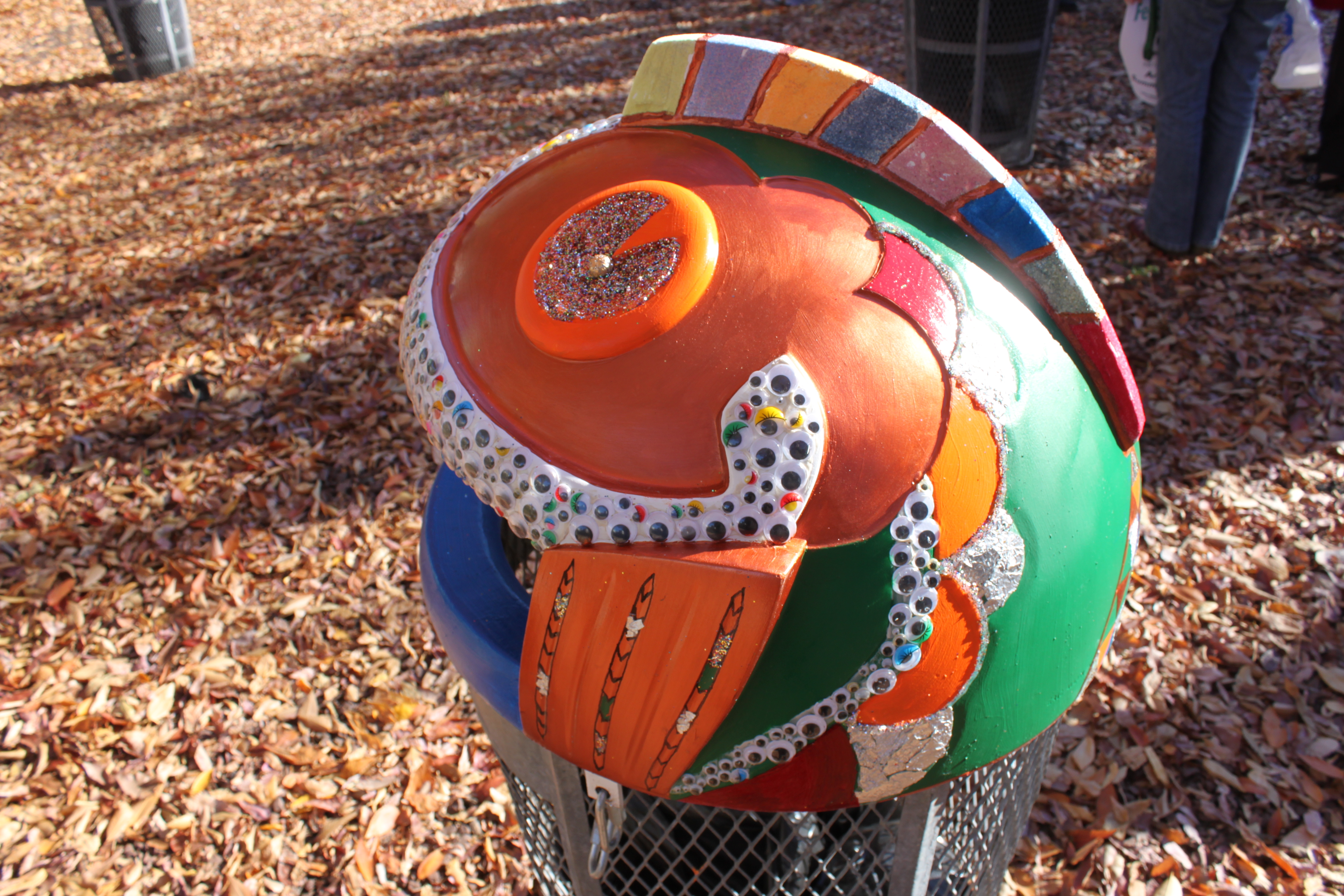 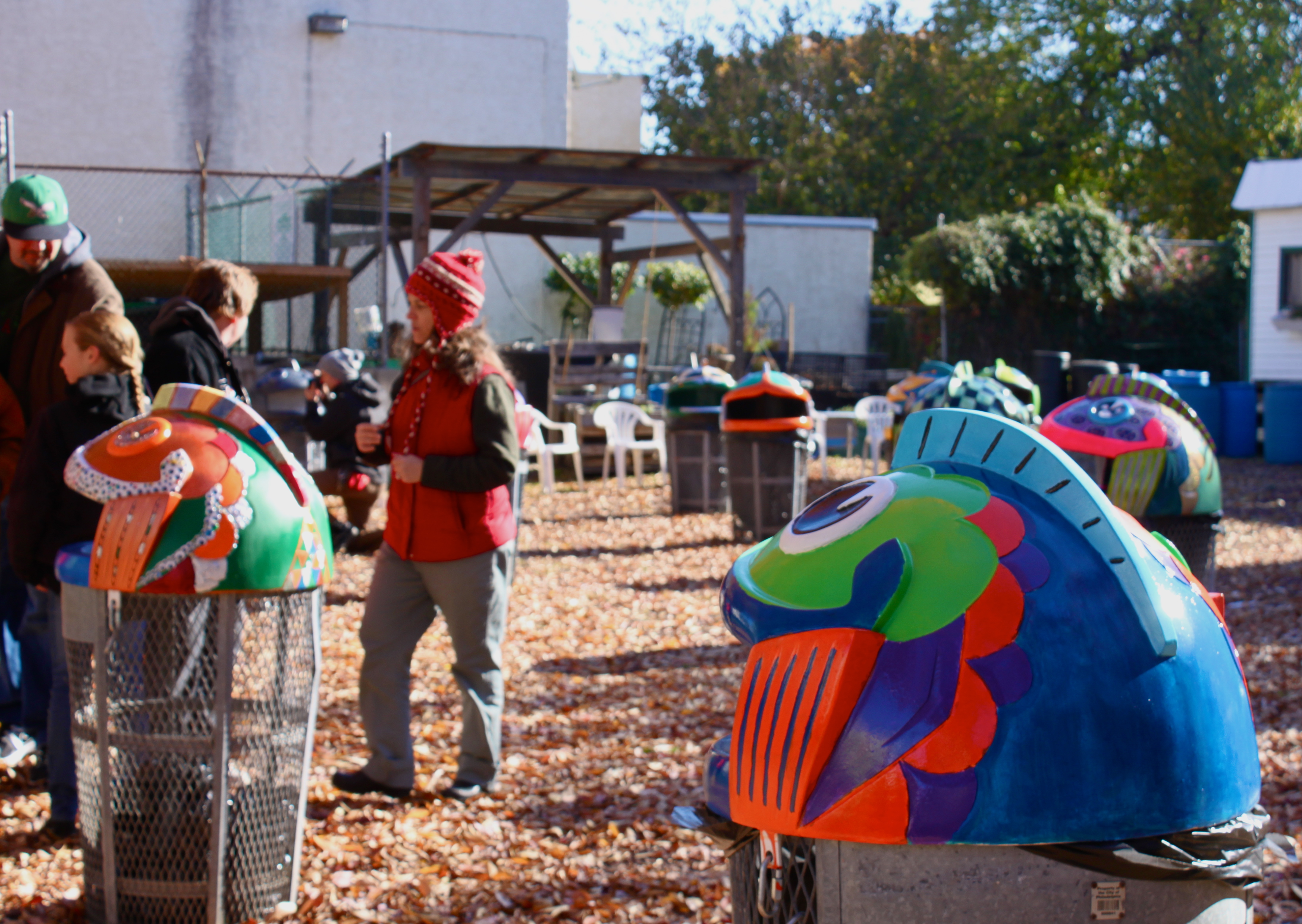 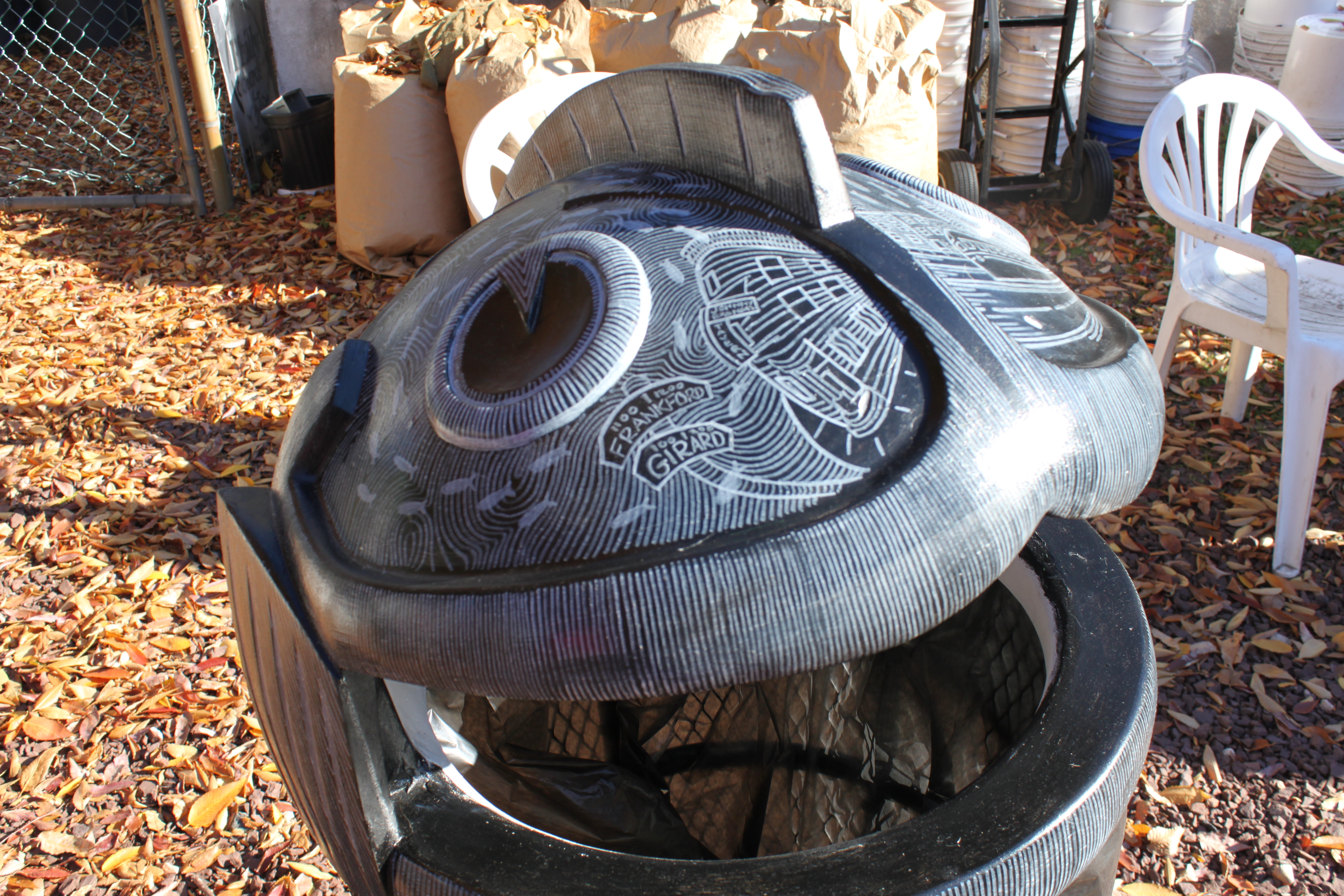 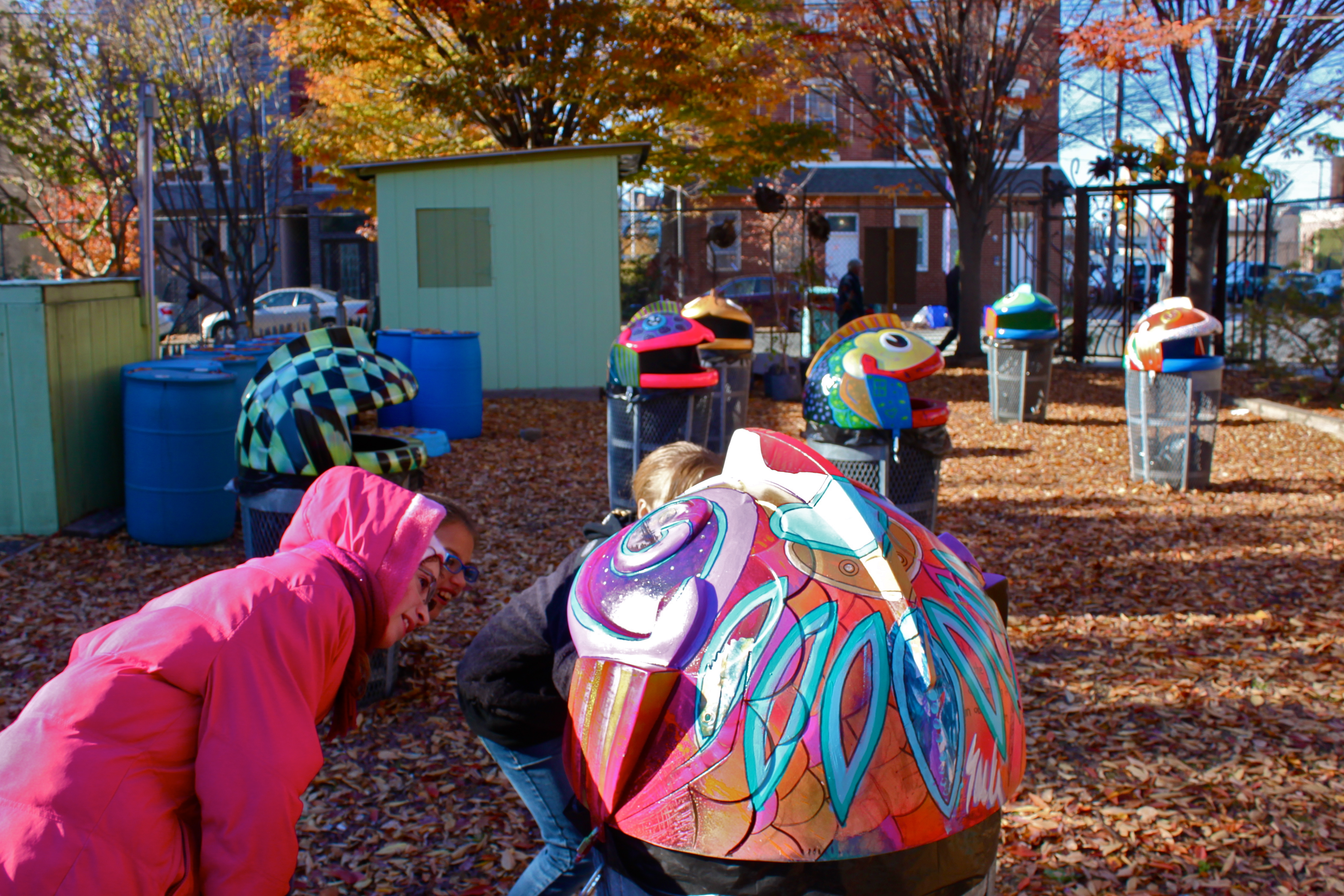 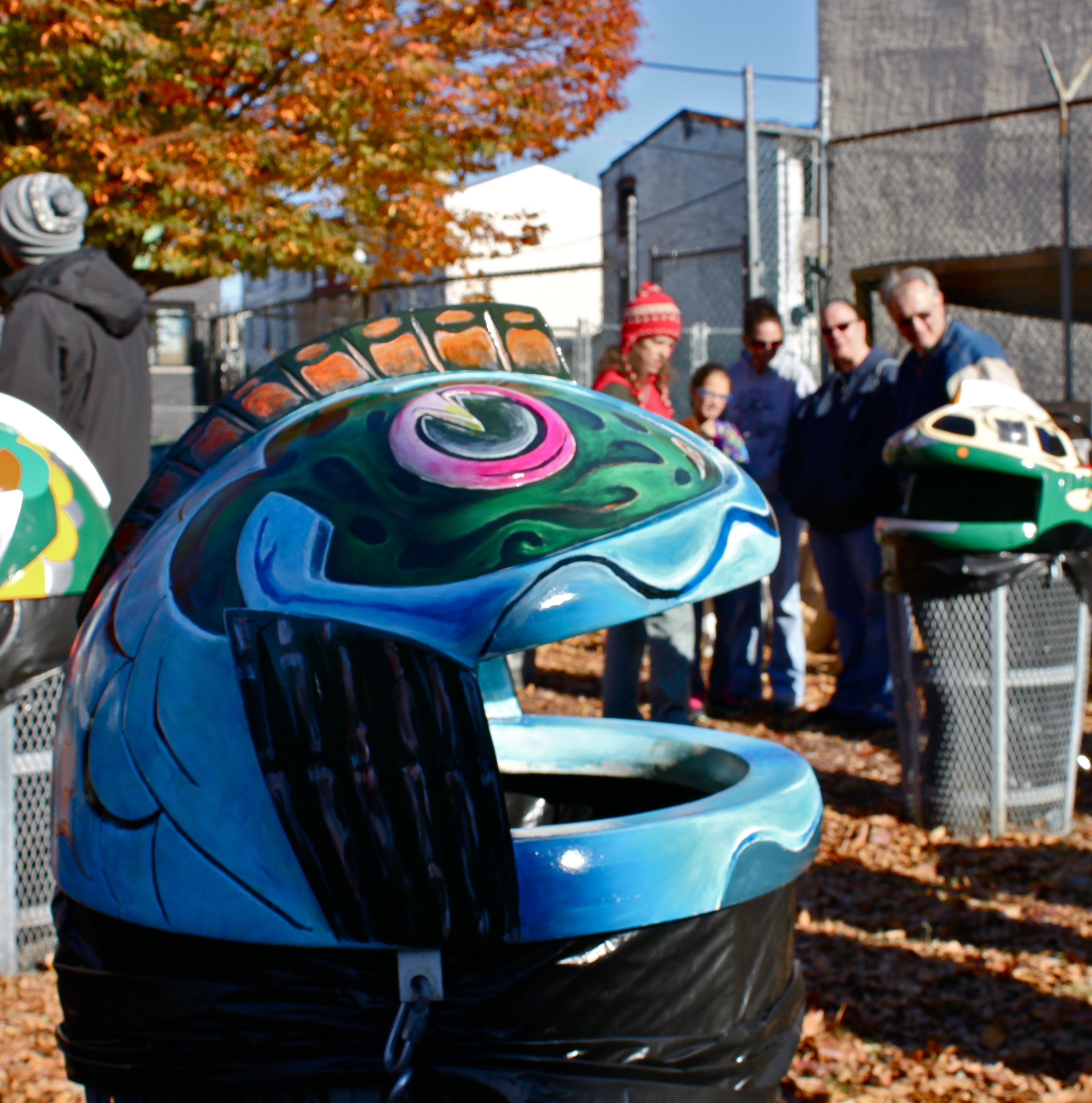 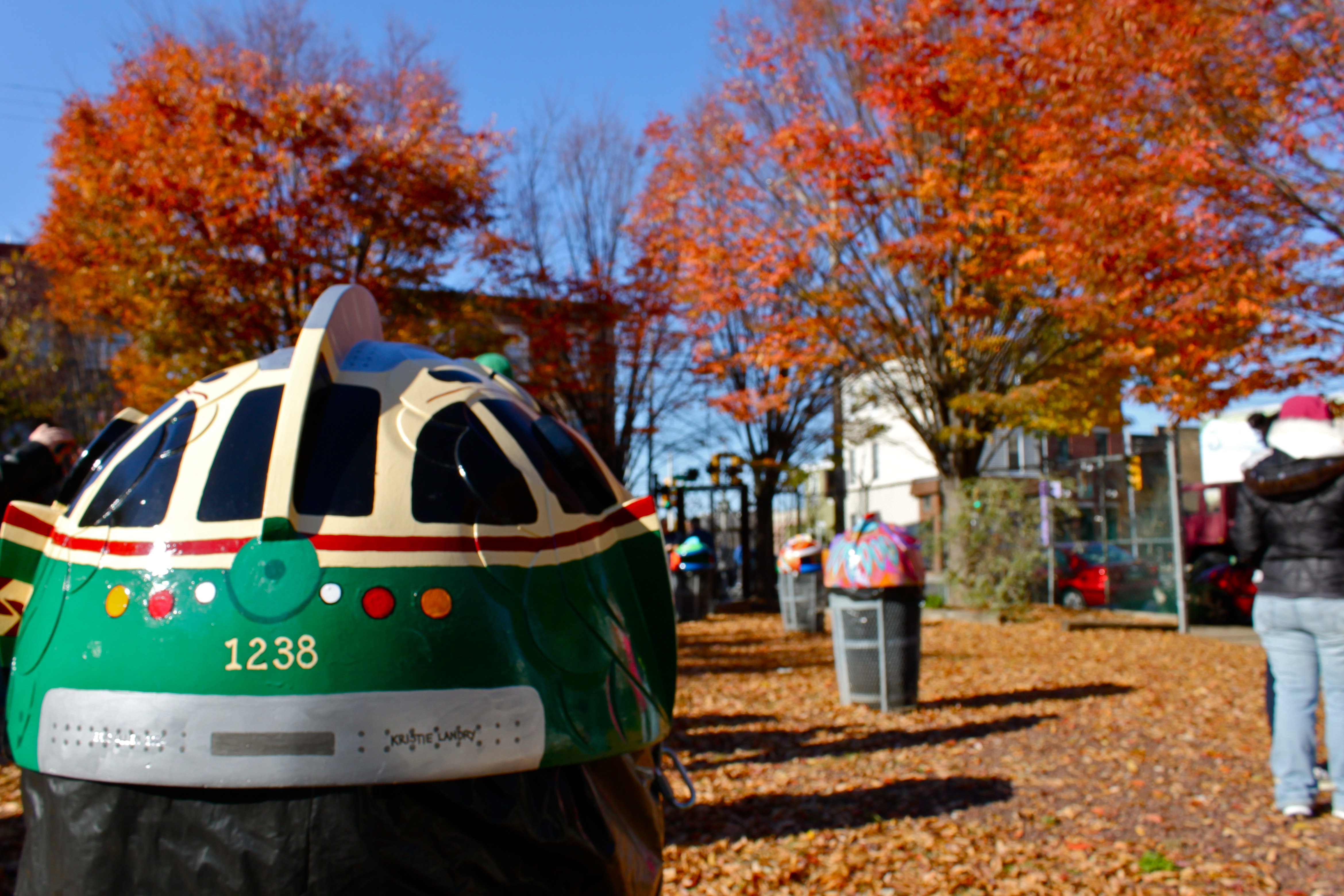 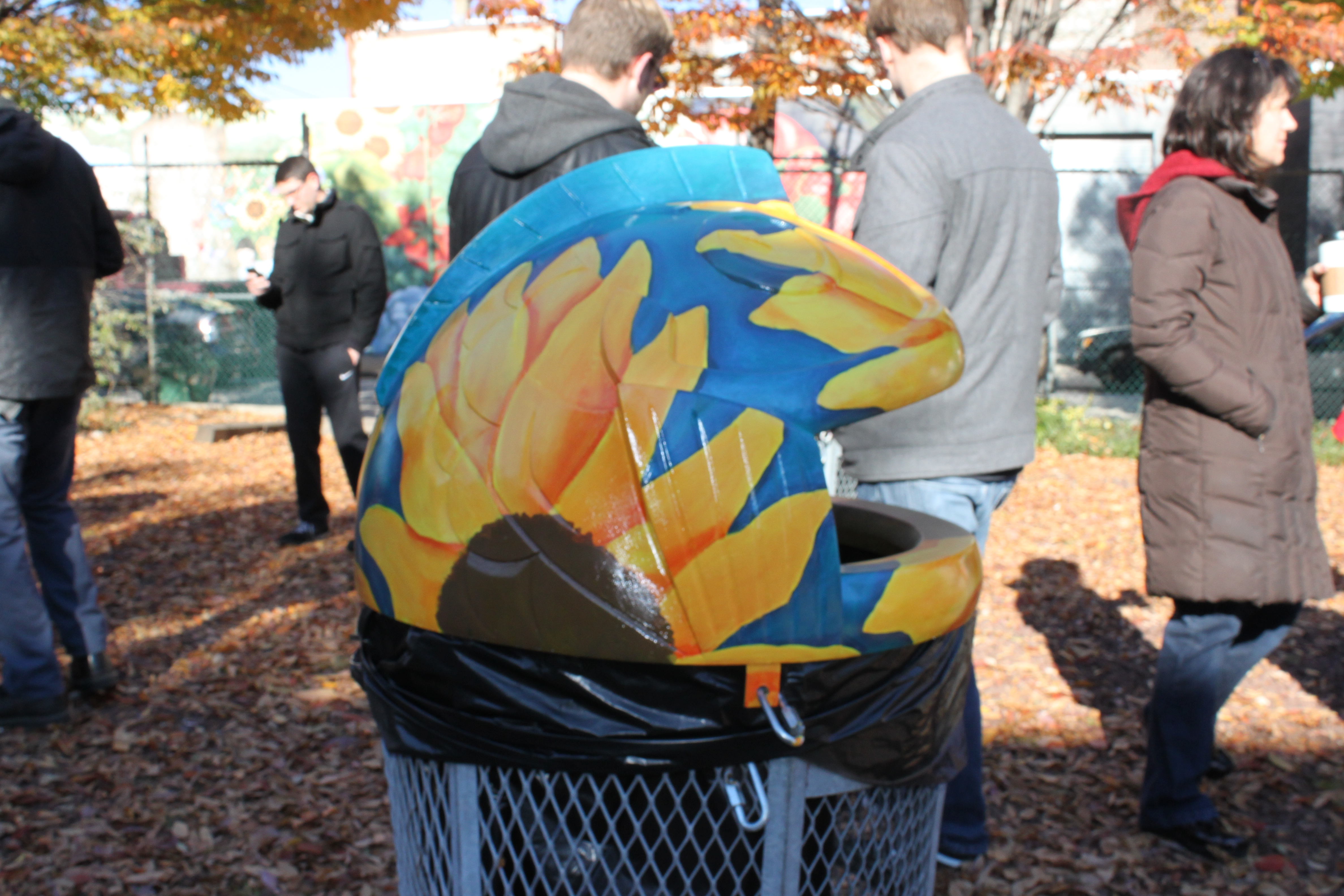 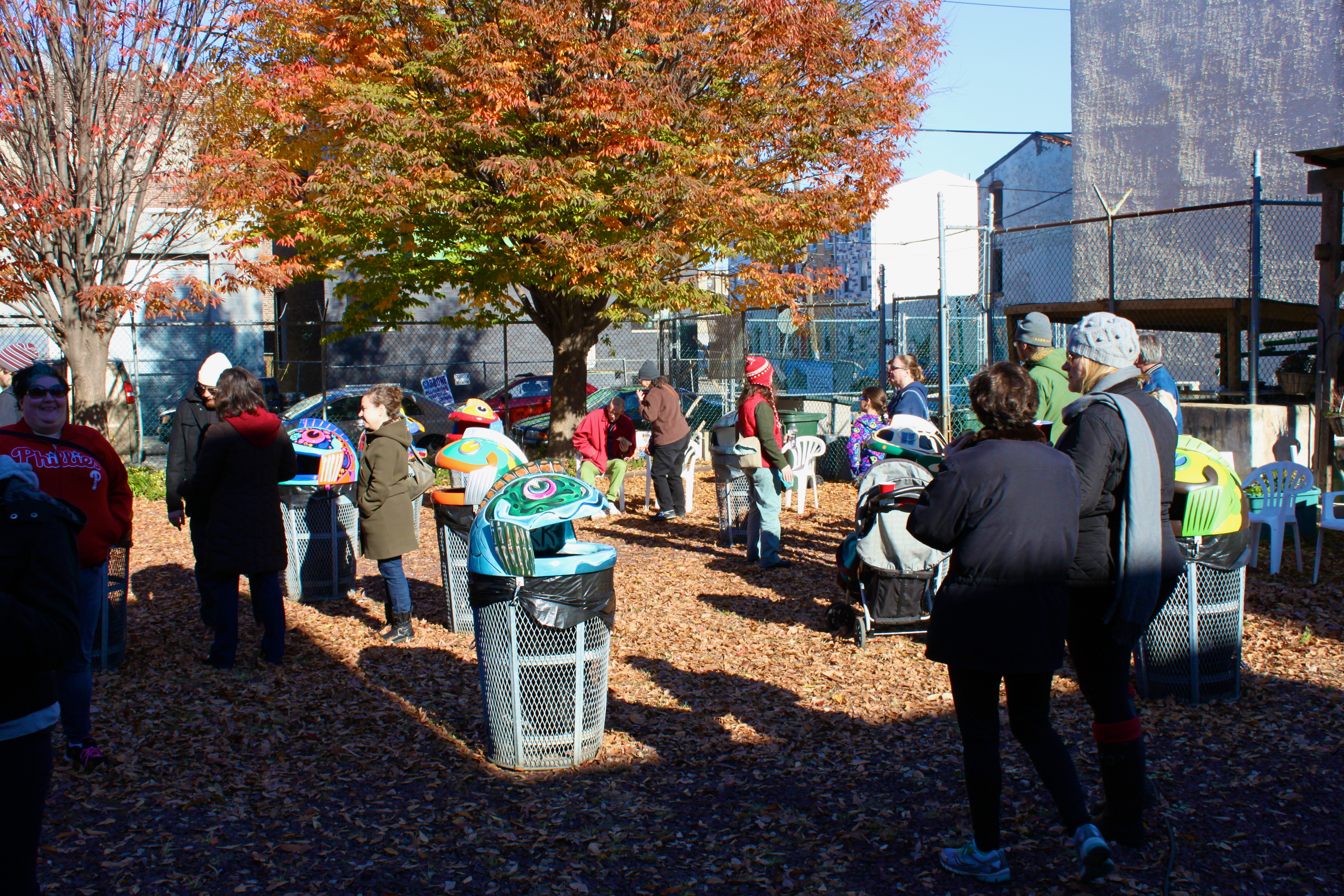 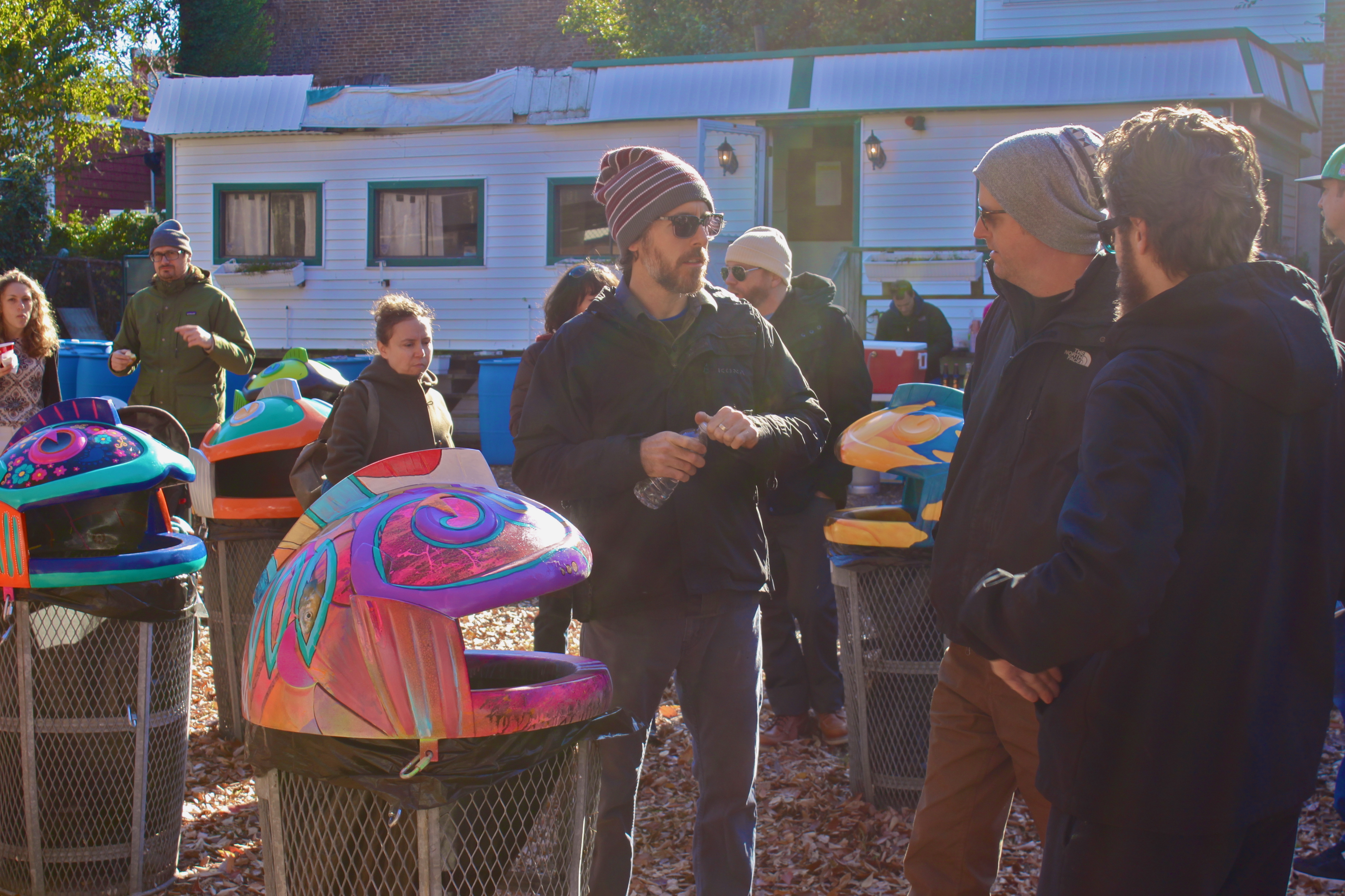 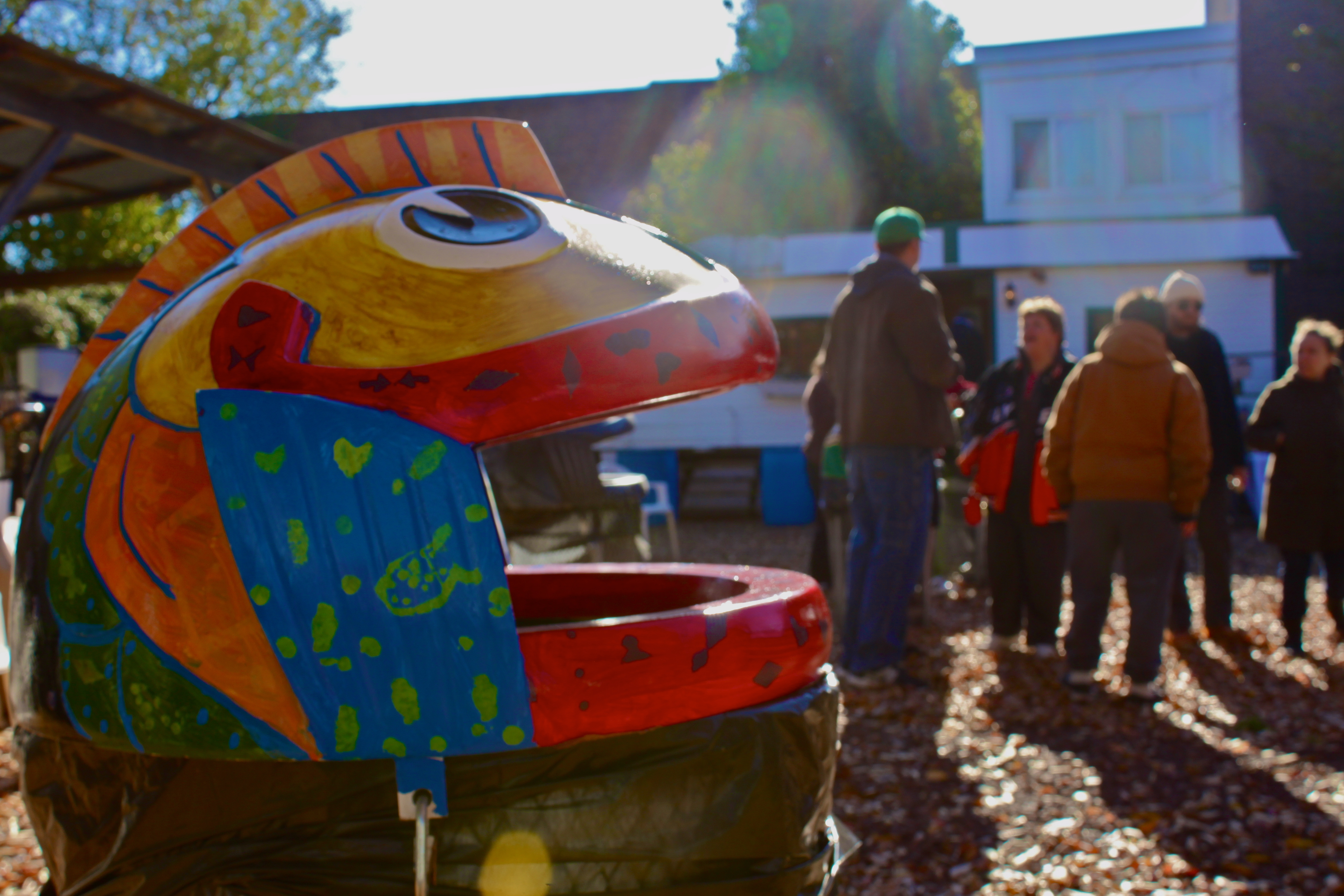 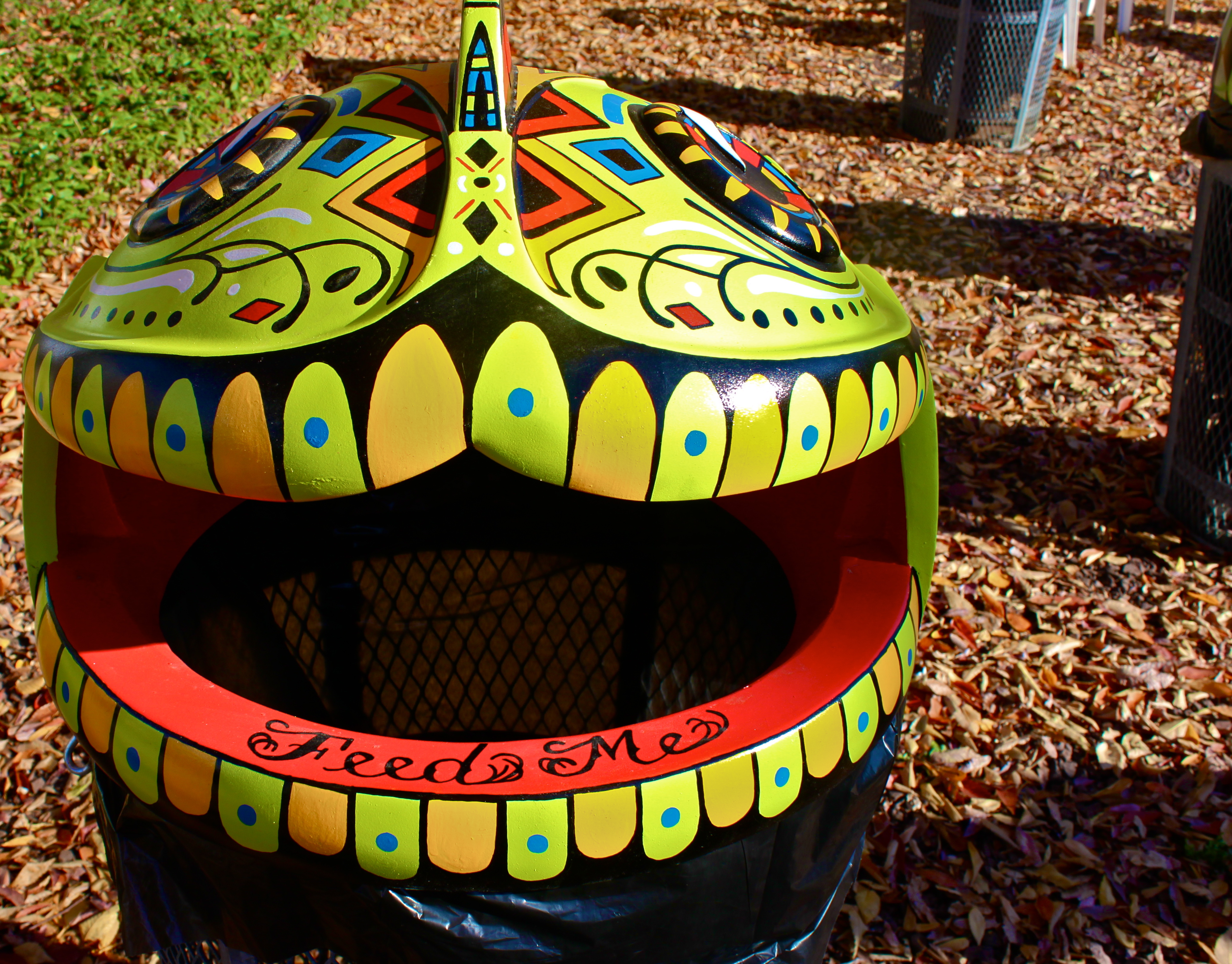 https://vimeo.com/37433328] For decades after its factories and manufacturers moved out, Fishtown struggled to find the businesses to bring its economy back. Today, thanks to about a dozen new projects, Fishtown’s revitalization is moving forward. The community’s [continue reading…]

Kensington is home to some of the city’s most well-known art galleries and storefronts, from bizarre sculptures, like that of the man pictured above in the PaperMill Community of Artists, to American-made accessories and exhibitions featuring the [continue reading…]

“One, two, three, two, two, three and go!” Kun-Yang Lin said as he stood in front of his ensemble of professional dancers at CHI Movement Arts Center (CHI MAC) and gave notes during rehearsal of a restaged [continue reading…]