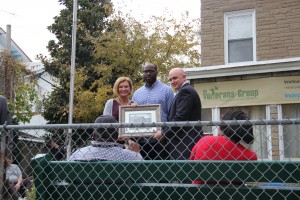 When Thomas Adams was just a child, he was frequent witness to his mother’s ferocious fights with her boyfriend.

Adams, now a Marine Corps veteran, was so afraid that his mother would be hurt that he’d dart across the street to ask the bar maid to call 911. Another time, he woke up to the smell of smoke and opened his door to 10-foot flames after his house had accidentally caught on fire.

When he was just 7, his mother abandoned him on his grandmother’s doorstep. Adams’ grandmother would die two years later, landing him in undesirable foster care conditions until he was placed back with family members.

Mark Whetstone, an Army veteran, also endured major pain as a child. After a particularly harrowing trauma, Whetstone recalls going outside and taking a seat on the front steps after the incident. He watched the other kids run up and down his street, laughing and playing. Whetstone couldn’t bring himself to join them.

“After that happened to me, I came outside and I sat on the step,” Whetstone said. “I watched the other kids and I had this thing over me that I could not tell anybody about. That kid that was on the step, I just felt like it was really devastating. I changed from that point. I looked at life and people differently.”

Both Adams and Whetstone have been diagnosed with post-traumatic stress disorder, a type of anxiety disorder that can occur after a major tragic event. While PTSD is a major issue for many who have served in the military, not all veterans’ PTSD can be traced back to combat-related incidents. For many, like Adams and Whetstone, the initial trauma came before they even entered the service.

Adams and Whetstone are currently living at the Veterans Group, a housing facility in West Philadelphia that provides shelter, food, case management and supportive services to homeless veterans. Those services include classes and sessions at the on-site Wellness Center, which just celebrated its first anniversary.

The VA offers therapy and other treatment to veterans diagnosed with PTSD. Adams, who served for 10 years and worked as a drill instructor for two, said he had some difficulty proving his condition.

Dr. David Oslin, the Associate Chief of Staff for Behavioral Health at the VA, said the best methods for treating PTSD are exposure-based treatments like cognitive processing therapy or prolonged exposure.

“They really do require someone to have a diagnosis of PTSD for them to be diagnosed and to work well,” Oslin said of these treatments, adding that patients must have an identified trauma. “You wouldn’t want to use those therapies or treatments on someone who may have had trauma and is mostly having depression reactions to that trauma. Patients may not understand that.”

Ronald Jay Blakey, a Navy veteran who is also currently living at the Veterans Group, said he feels like he is suffering from PTSD because of the many losses he has suffered in his life, including the deaths of his parents and all of his siblings. He also saw a plethora of gang violence that took many of his friends in South Philly in the late ‘60s before he enlisted in the military in 1969.

Blakey said he has talked to therapists at the VA, but was not been diagnosed with PTSD in the written synopsis. 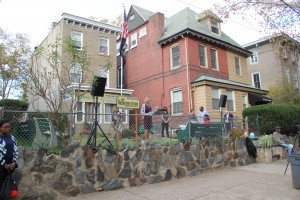 “Who is someone else that I haven’t talked to to tell me how I am feeling?” Blakey asked.

“A lot of people have a lot of misconceptions of what PTSD is,” Oslin said. “You can go through a traumatic event in your life…and you can have a lot of different reactions to that.”

Oslin said that while he is not sure if it makes a difference in getting benefits, the time that the identified trauma happened – either before or after service – doesn’t make much difference in how a veteran is treated clinically.

“From a treatment perspective, that doesn’t matter to us,” Oslin said. “We would treat them just the same.”

According to the Mayo Clinic, PTSD symptoms are often grouped into four categories: intrusive memories, avoidance, negative changes in thinking and mood, and changes in emotional reactions.

Whetstone said that joining the military only aggravated his existing symptoms. He was initially joyful to be joining the military – his getting out of North Philadelphia was a big deal to his friends and family. However, a combination of things illustrating the intensity of joining the military – the sergeants bellowing orders, the change in location, the stressful atmosphere – caused Whetstone to have what he described as a breakdown. The final straw came when a white drill sergeant, who Whetstone believed was racist against him, tried to push Whetstone too far.

“We were training with live ammunition and I actually wanted to kill him,” Whetstone said. “I sat and thought about shooting him, because he would stay on me for no reason. Even the other soldiers would be like, ‘Why are you messing with him?’ He’d just stay on me.”

Whetstone said it was then that he realized that it would be best if he got out of the military before he hurt himself or someone else. Throughout his adult life, he struggled with cocaine addiction and had dreams about his attacker, constantly wondering if the traumatic event really happened or if he imagined it.

These existing issues plus tensions in his family about a woman Whetstone was romantically involved with manifested in a suicide attempt when he was 26. Whetstone was taken to Einstein Mental and Behavioral Health Hospital and lost the ability to speak for a time.

“At Einstein, I didn’t initiate that admission,” Whetstone said. “It was people around me, my family, that was like, ‘What’s going on with you? What’s wrong?’ I was like, I couldn’t talk. I couldn’t say anything. I couldn’t explain it to them.” Whetstone described this as feeling void. He later went to Friends Hospital, where he found the support system he needed to finally talk about his trauma.

After a relapse, Whetstone went to Presbyterian Hospital where it was then suggested to him that he try going to the Veterans Group. Whetstone’s marriage had recently ended, and he wasn’t sure where else to go.

“I just prayed,” Whetstone said. “I prayed and asked God to make the decision for me, because I was really scared and I was at my end’s wit. I didn’t have a clue of what to do anymore. My wife was gone. My marriage is over. Everything that I own is gone.”

However, Whetstone said that he knew he made the right choice when he met Cliff Skinner, the Veterans Group’s Director of Operations and Programming.

“I just allowed [a woman at Presbyterian Hospital] to set up for me to come here,” Whetstone said. “Mr. Cliff, he came and picked me up. And it was just something about Mr. Cliff – he brought me over here and talked with me. We just connected right away.”

Like Whetstone, Adams also battled addiction throughout his life, which he attributes to the PTSD giving him the urge to distract himself from the painful memories of his childhood.

Adams said that these memories began to affect him more intensely as he got older.

“You go through life, or a period of life in your 20s, your 30s maybe, and you tend to forget about those things,” Adams said. “But when you get older in life, you start to remember them more.  They have more of an impact on you then.”

Despite the yearning to escape these thoughts, Adams said it’s impossible for anyone with PTSD to truly escape it since it has so many effects on everyday life.

“It’s a major element in my life, in anyone’s life that has it, because it seems to have a role in everything you do,” Adams said. “You have a lot of fear about everything – bills that come, challenges that come.”

Adams said he has recently started therapy through the VA and speaks with someone weekly about this concerns. He said he believes it is working.

“So far, the talks that we’ve had, [the therapist has] been very receptive to my talking and has been very optimistic about my hopes of not having it one day and working with me to get over some of the humps and fears that cause the PTSD to begin,” Adams said.

For Whetstone, it hasn’t been on specific group session or method that has helped him manage his PTSD. Rather, it’s internal moxie that drives him.

“See, for me, there’s no technique or any type of method that you can get to me to get me to feel better,” Whetstone said. “I think it’s an individual’s initial motivation to make that determination that they want to be better.”

Adams said he wishes that more people were educated about PTSD.

“I think it’s important to know that it needs to be treated like any other disease, like any other sickness – that’s with proper therapy, proper medication, proper treatment,” Adams said.

Whetstone said that through the support he’s getting at the Veterans Group and by his faith, he feels he is in a good place, emotionally and physically.

“I’m at the top of my game,” Whetstone said. “I look at it like, I trust in the Lord, for one thing, and that’s the main thing. And I try not to be so hard on myself. And I try to allow people to be close to me, to develop relationships with people in this community. I tell myself that, ‘Mark, you’re not a bad guy. People aren’t against you. Those are just the thoughts that you might have in your head, but it’s not true.’“ 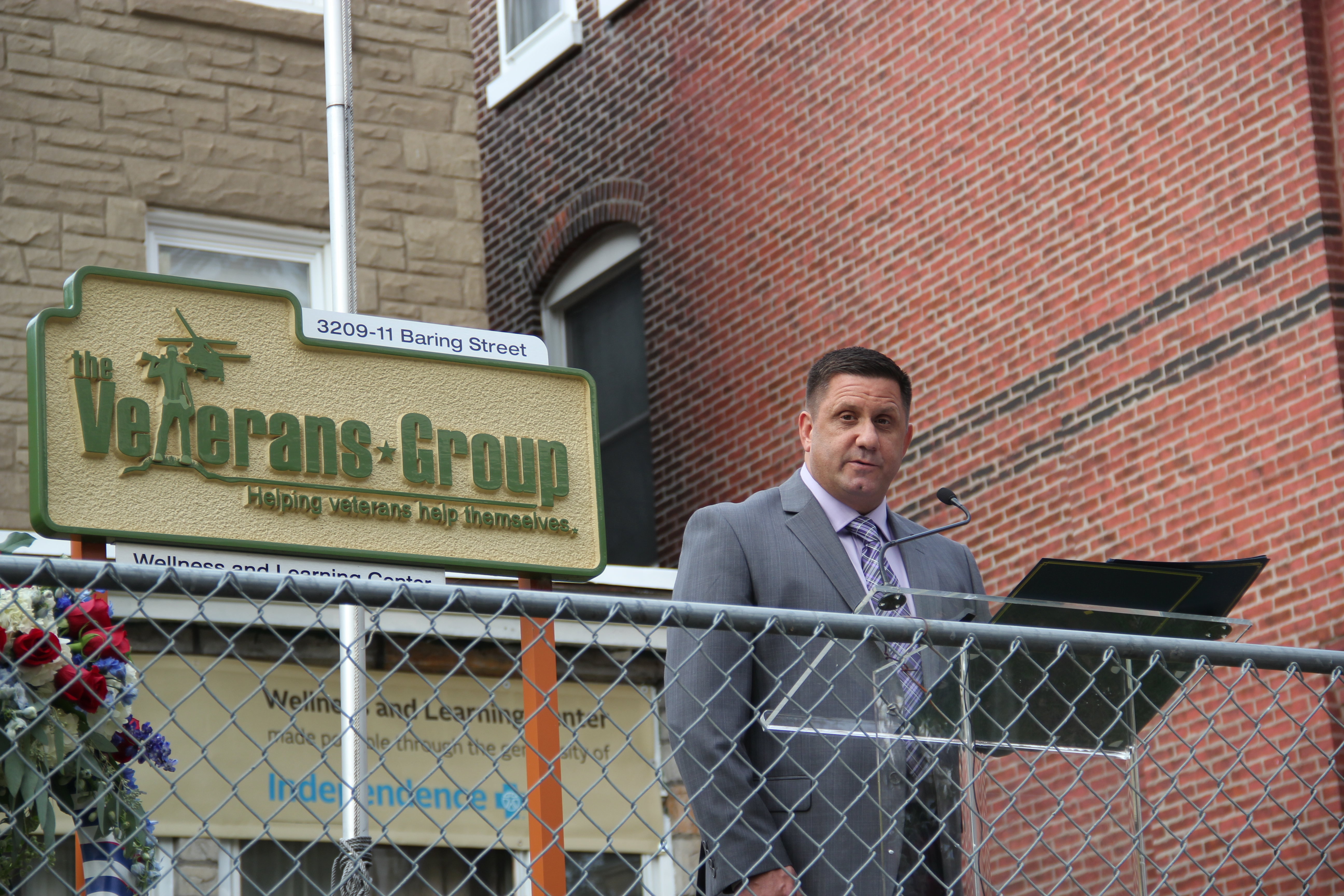 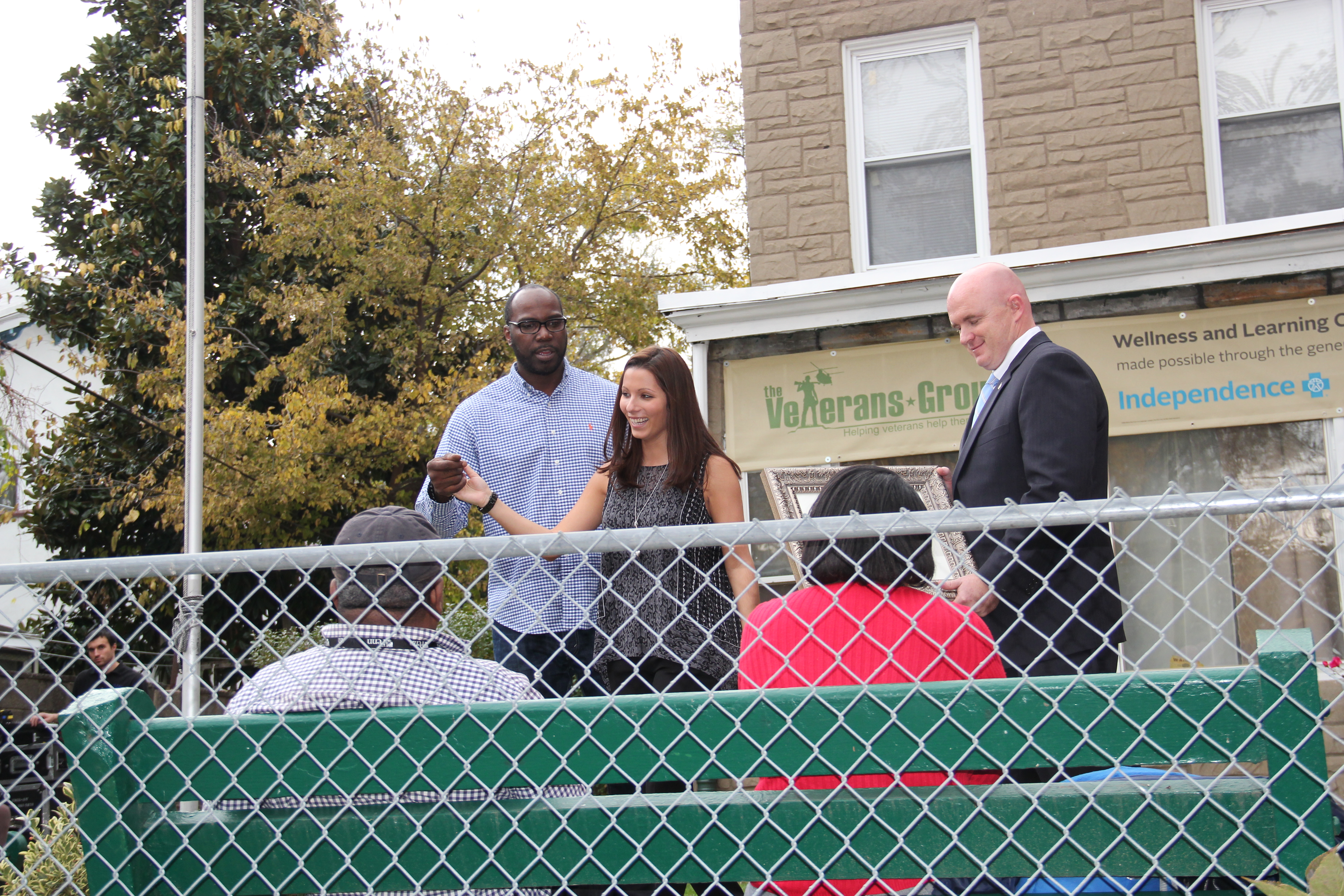 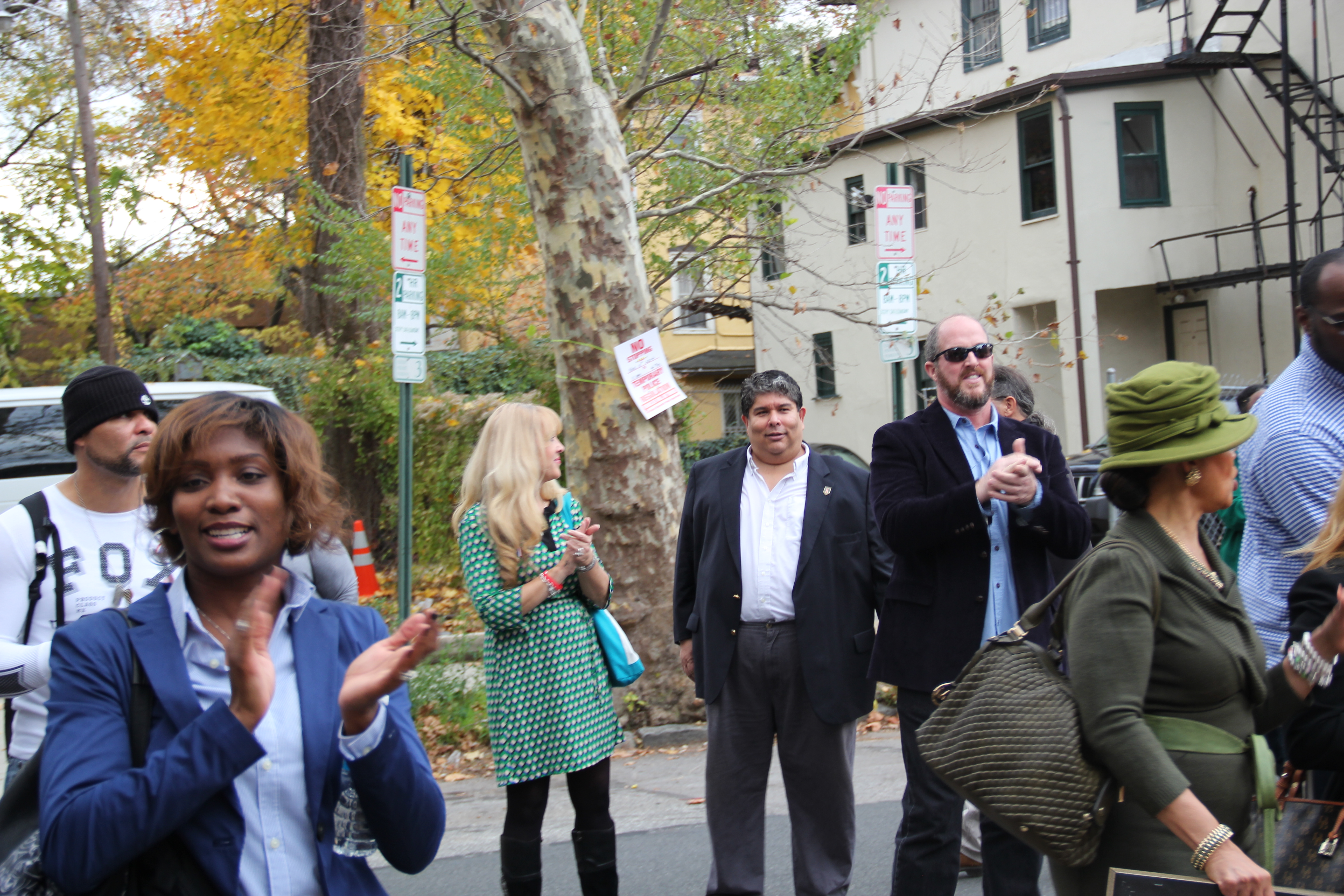 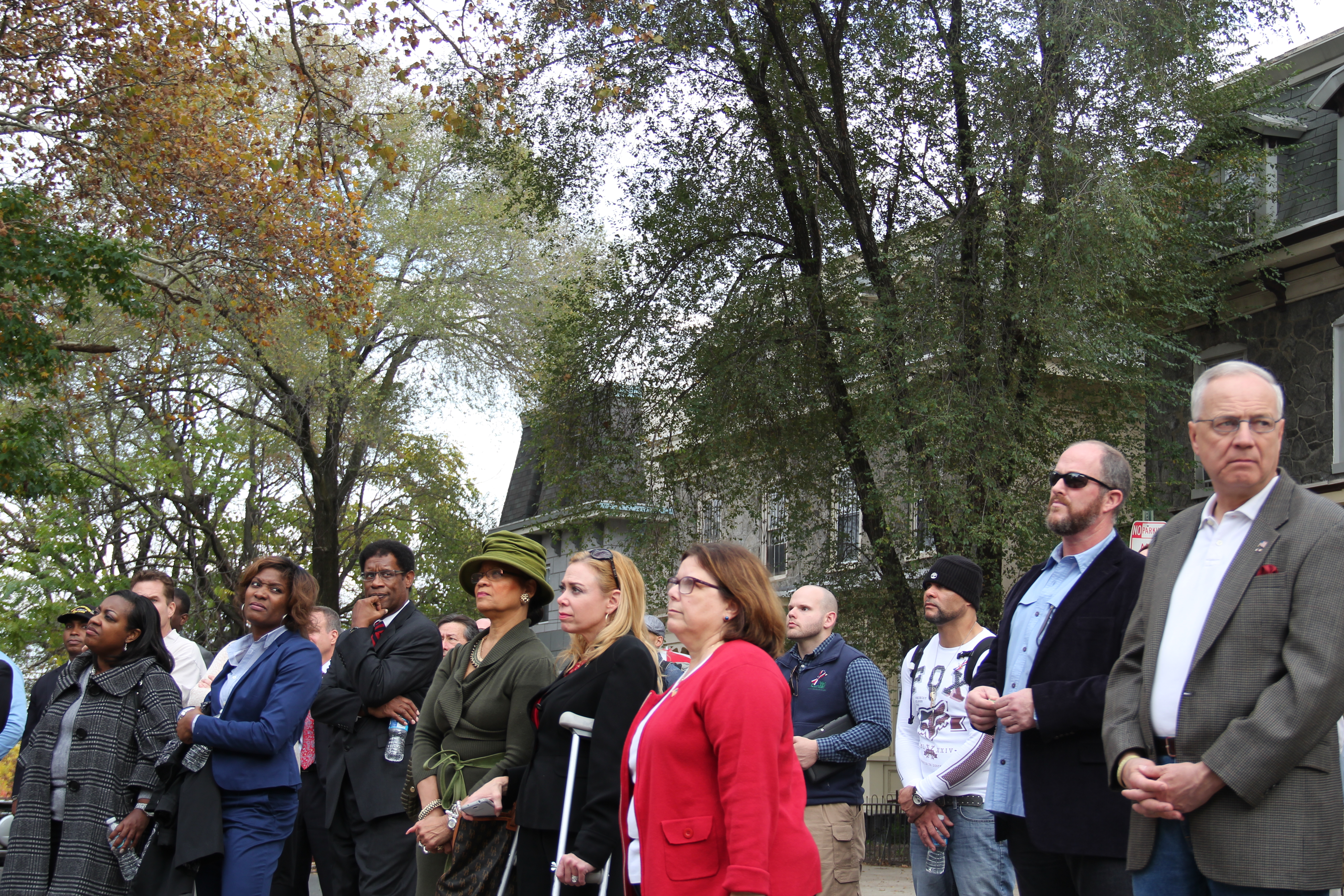 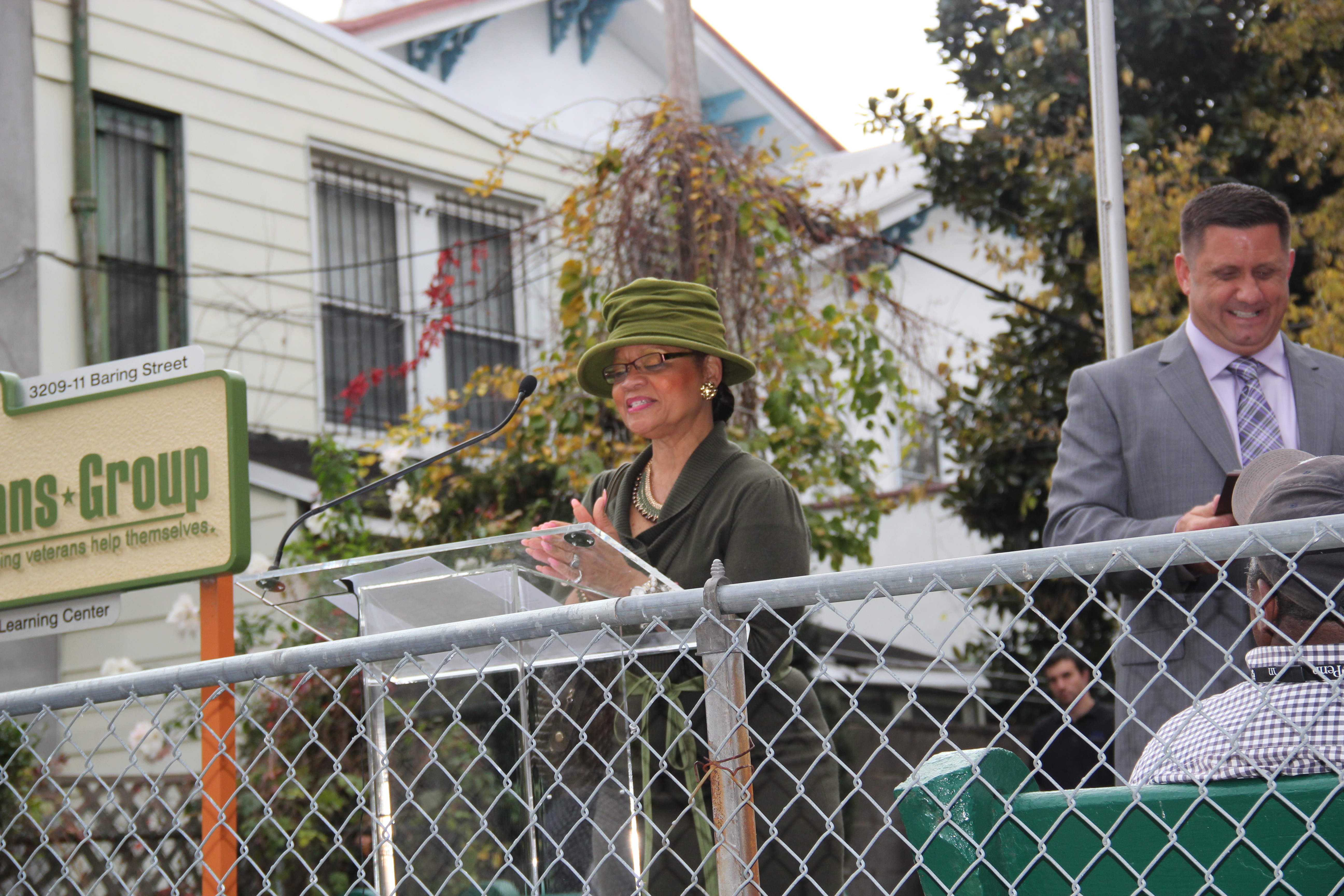 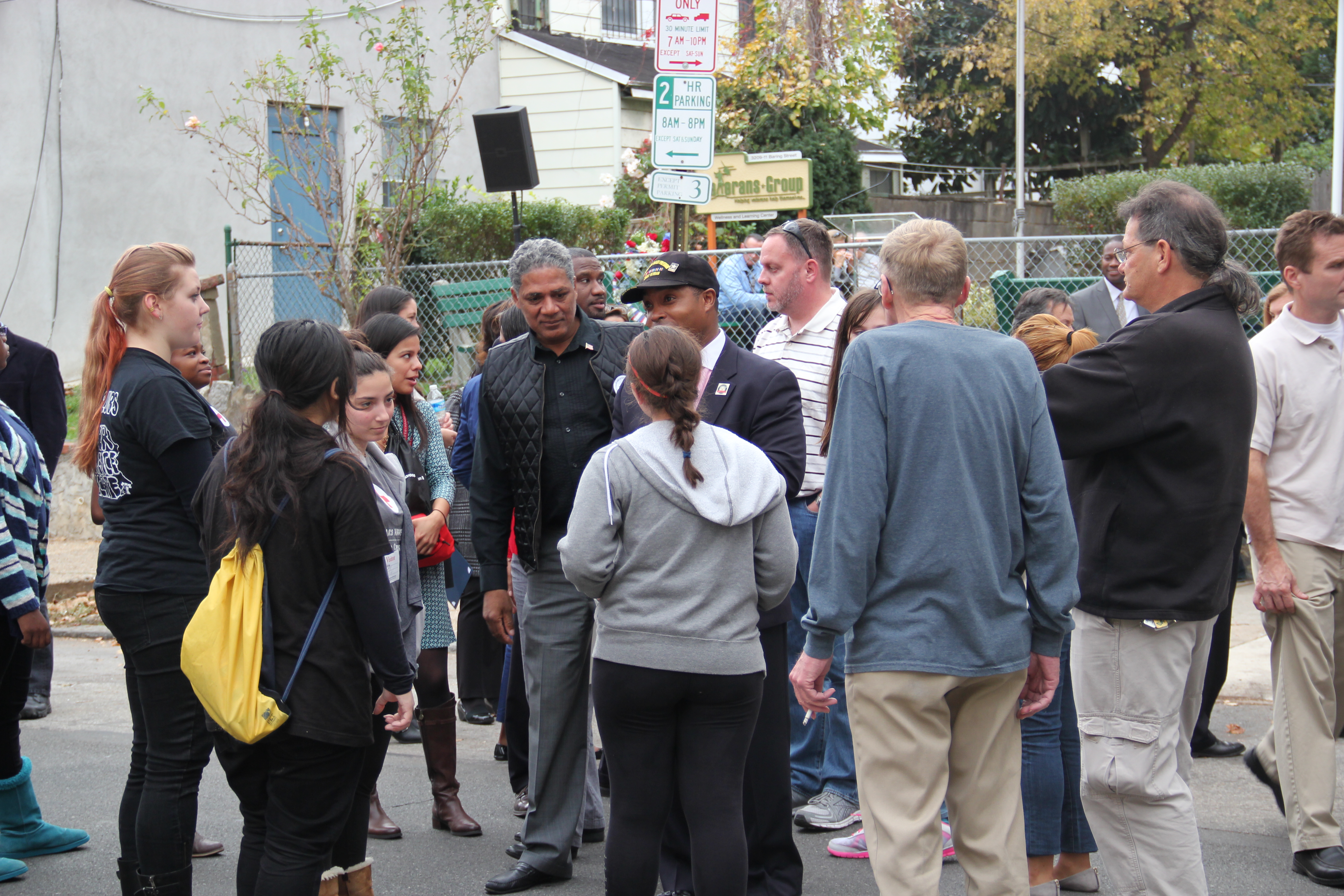 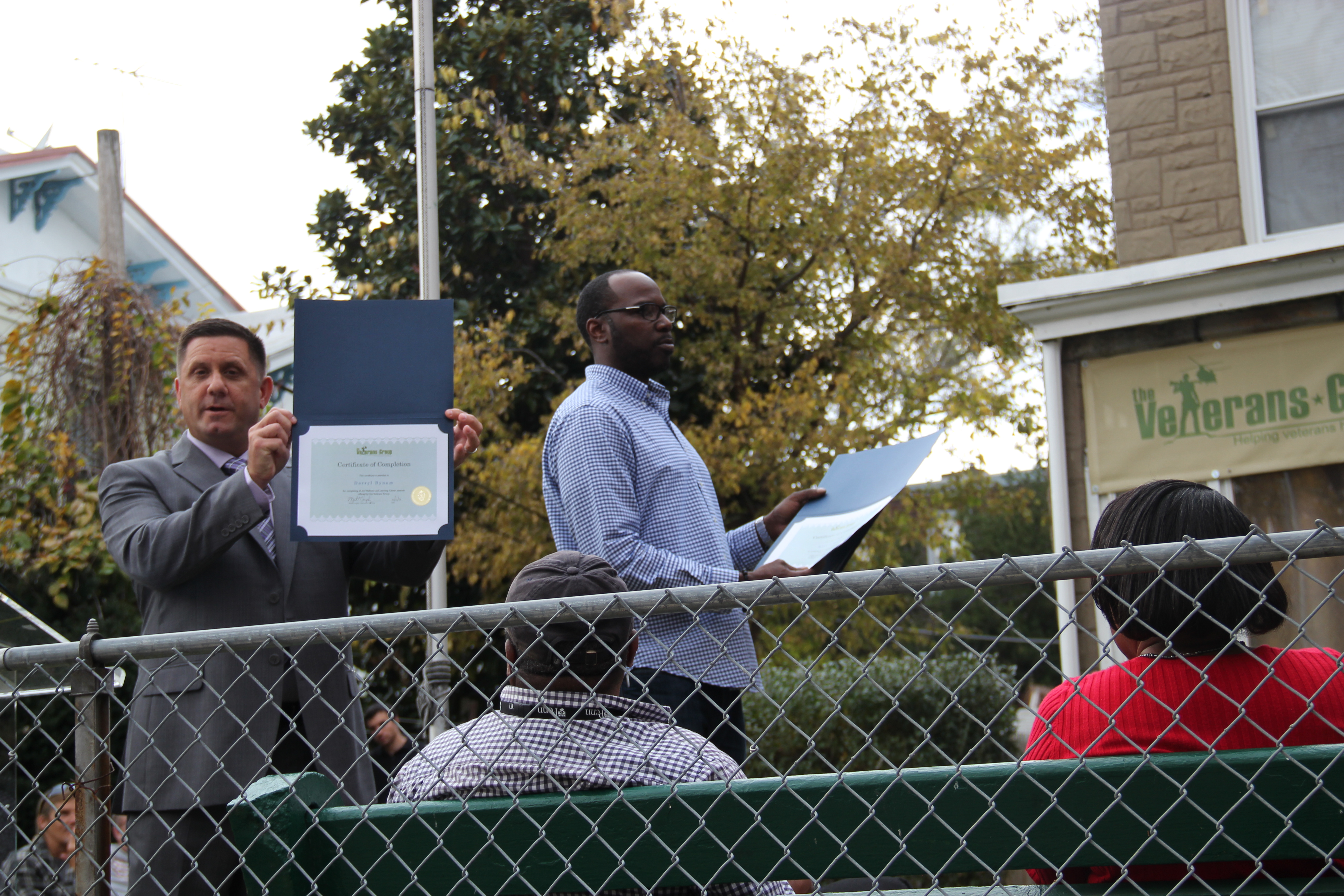 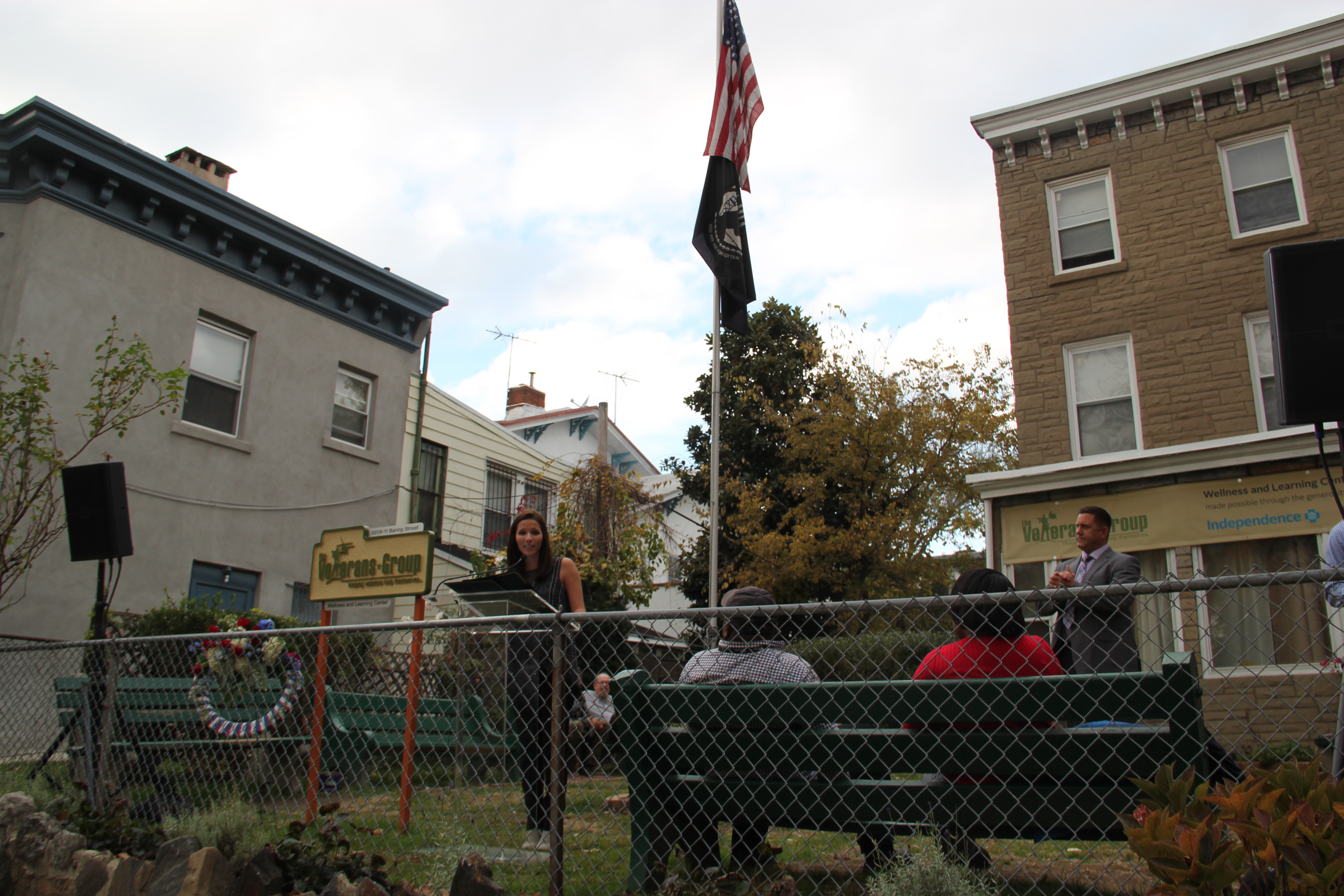 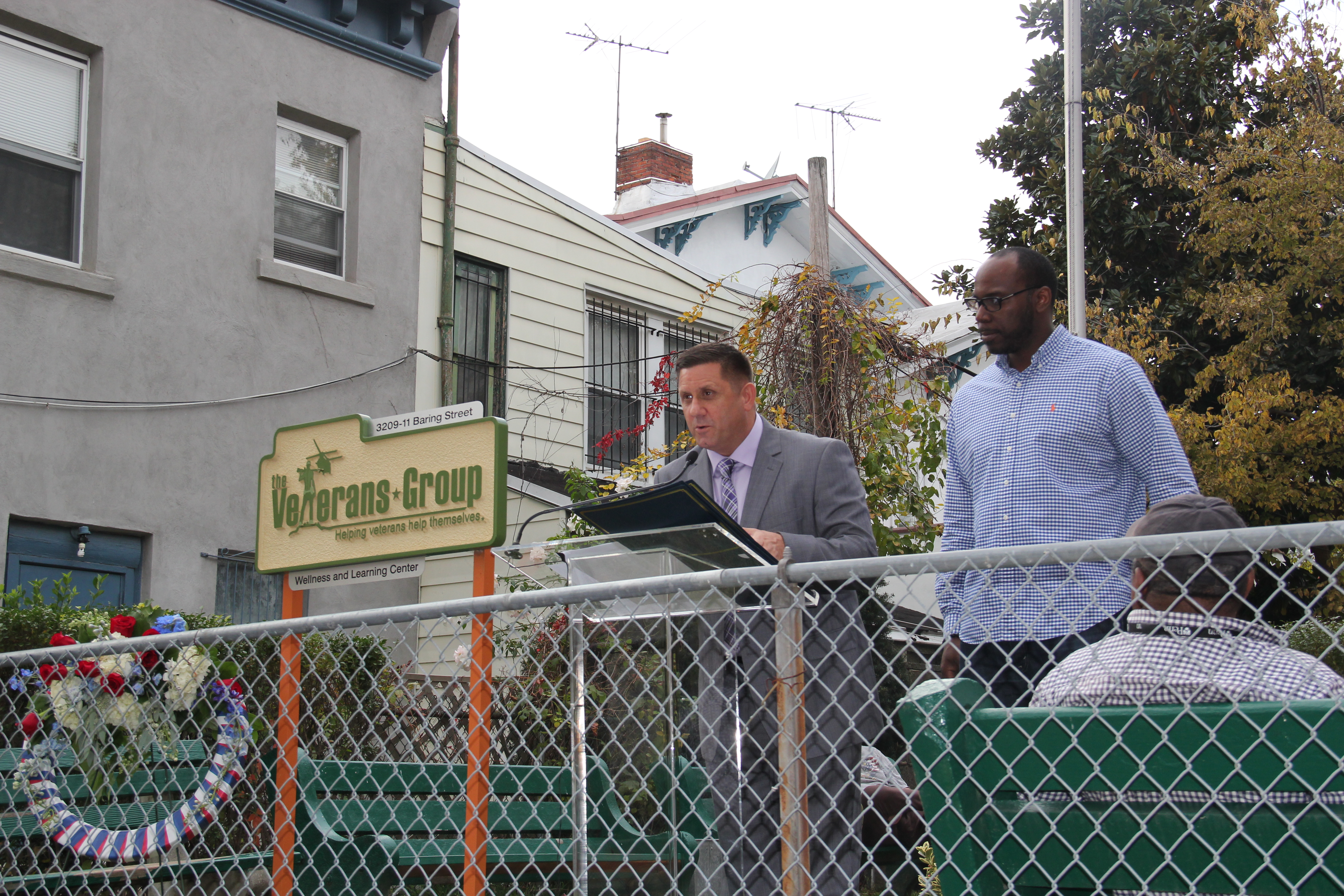 – Text, video and images by Nic Cutrona and Jenelle Janci.

[youtube https://www.youtube.com/watch?v=AMDfrBRx1A8&w=420&h=315] When the PAL Center shut down four years ago due to construction, Chantel Jones said the Fairhill neighborhood took a turn for the worse. “Everybody, since they didn’t have a place to go, [Read More]

How To: Start A Community Garden

Finding a place to care for plants or harvest crops in an urban setting like Philadelphia may not be easy. However, throughout the city there are more than 60 community gardens at the public’s disposal. If [Read More]