Mayfair residents see the vacant storefronts (above) and recall a time when Frankford Avenue was a thriving shopping destination.

“Frankford Avenue used to be the shopping center for everyone in the neighborhood,” said Dana Lambie, a lifelong Mayfair resident. “It’s kind of gotten away.” 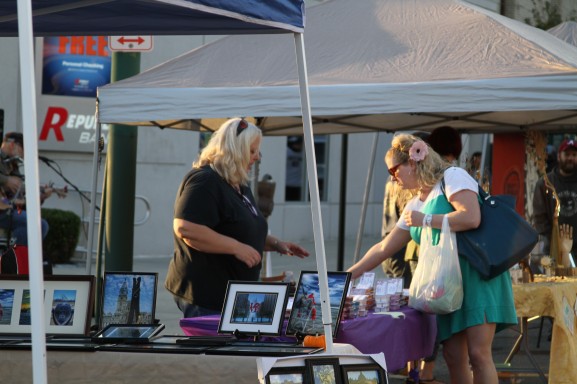 At a meeting of the Mayfair Business Association, members expressed their desire to attract a mix of desirable new businesses in hopes of revitalizing the Frankford Avenue business corridor. Restaurants, coffee shops, boutiques and art galleries (above selling goods at the Mayfair CDC Third Thursday) are among the types of businesses officials said they would like to see. In a measure to achieve this goal, a collection of Mayfair community leaders and business owners are working to establish a Business Improvement District (BID) along Frankford Avenue and part of Cottman Avenue.

A BID is a way for property owners and businesses, in a predetermined area, to supplement funding for services and improvements for that area. Participants pay an assessment, usually based on property value, that goes towards initiatives like cleaning and beautification projects, public safety, business development and neighborhood marketing.

Business Improvement Districts are currently governed under the 1998 Community Economic Improvement Act and are supported by the City of Philadelphia Department of Commerce. If created, the Mayfair BID would join nearly 10,000 businesses, across fourteen other such districts established in the city. BIDs are not exclusive to Pennsylvania. There are more than 1,000 BIDs in North America.

Denis Murphy, Director of Commercial Corridor Development for the Department of Commerce, manages the formation BIDs in the city. He said establishing a bid is a complex process that usually requires the help of an expert.

“In the planning phase, people often times need a professional to keep it going,” said Murphy. “The Commerce Department has funding for planning.”

In August 2013, the Mayfair Community Development Corporation (CDC) was awarded a $20,000 grant from the Department of Commerce to help with BID-planning expenses like hiring a consultant to guide the process. The CDC enlisted the help of BID consultant Dan Hoffman. He has more than 30 year of experience working with BIDs and BID policy. He explained that there are five basic questions that need to be answered in the process of creating a BID: Where is the BID? What programs will be implemented? What is the cost? How will the money be raised? Who will manage and govern the entity?

“There are a number of choices with each question that the organizers will have to decide as they work through the process,” said Hoffman.

When it comes to answering those questions, Murphy explained that every BID is different.

“The reasons [for forming a BID] can be very specific to the location, but the shared trait that they all have is that BIDs are able to address problems that individual property owners can’t,” said Murphy.

Murphy shared in Hoffman’s view about fundamental decisions that must be made. He said while BIDs have proven to be effective, it is paramount that decisions about location and budget be made first. 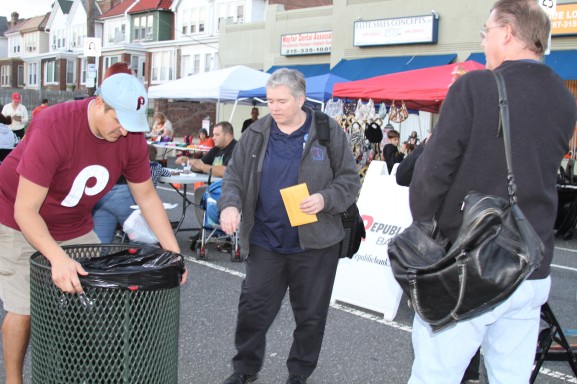 Murphy is optimistic that a BID would be effective in Mayfair. He said the leadership (above) seems to have a clear focus.

“What I sense in Mayfair is that the people are really committed to the area, so there are things that they see in their neighborhood that they want to do something about,” said Murphy. “The leadership there will solidify that commitment when they see progress in those areas.”

Ruthanne Madway, ‎Executive Director at Mayfair CDC, agreed with Murphy. She is working with Hoffman on the Mayfair BID.

“People here [in Mayfair] understood where they needed to be and where they wanted to be, and a vibrant Frankford Avenue was really critical to that vision,” said Madway. “So the desire to think about setting up a Business Improvement District, I think, grew out of an acute sense of self-awareness.”

But Mayfair needs more than a vision. Creating a BID requires money. Property owners and businesses must be willing to pay an assessment. As for budget estimates, organizers of the Mayfair BID have not yet determined a dollar amount. Based on early planning, Murphy said he initially compared the potential Mayfair BID, in size and scope, to the existing Roxborough BID. The Roxborough District is comprised of 282 properties and reported a budget of $277,844 for 2013.

“In Mayfair, you have some larger properties so they have higher value properties,” said Murphy. “I think their budget is enough that it’s a meaningful amount and if they have good staff, they can show their property owners progress over time.”

So far, Hoffman and Madway said they have not gotten any resistance from property owners. They noted a remarkable level of cooperation.

“Business owners are, in their own businesses, problem solvers,” said Hoffman. “One of the purposes of BIDs is to solve problems that the individual businesses cannot solve by themselves.”

The Mayfair CDC is still in the preliminary stages of the BID process and holds regular meetings to further solidify plans. More details are expected to be announced in the coming months.

Jeannette Kurzenberger is 96 years old. She is a Mayfair resident and has lived in the same home for 74 years. Since the passing of her husband, Kurzenberger lives alone. To many, the idea of [continue reading…]

In the coming months, Mayfair’s residents and visitors can expect to see thousands of butterflies roaming throughout the neighborhood. After learning that the iconic North American black-and-orange insect is on the verge of disappearing for [continue reading…]

Mayfair pop-ups may do much to unify a neighborhood, but businesses don’t all see eye to eye on the subject of regular pop-up events. The intent, to bring together community and possibly spur local spending, isn’t [continue reading…]