After six years of sitting vacant, a slew of community meetings and a battle in the Pennsylvania Supreme Court the Roman Catholic Archdiocese of Philadelphia will be able to begin working on a brighter future for the dilapidated building.

The project will convert the abandoned Catholic school, into a income-restricted home for retired Philadelphians.

Built in 1912, Nativity B.V.M has been a landmark for the community. Generations of families have attended, worked or been apart of the iconic school since its doors first opened. Recently, low enrollment and failure to produce a steady revenue have forced the school to close its doors for good in 2008.

Soon, an ambitious idea to fill the now empty building has been set in motion. A grant of $11 million was awarded to the archdiocese in 2009 to create the Section 8 housing. 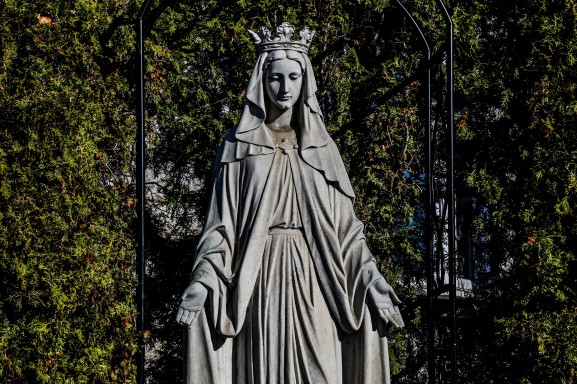 Deputy Secretary for Catholic Human Services John Wagner was initially brought in by the pastor after discovering a desire to provide services to the elderly in Port Richmond. After meeting the community, he was optimistic that the venture is finally taking steps in the right direction.

“In my humble opinion this is going to be a very tremendous asset to the Port Richmond community,” Wagner said. “It really is a transformation and an adaptable reuse of a building that once served this community for over 100 years as a school … and now with it being repurposed, it will serve seniors for countless decades into the future.”

The 62,500 square foot building will house 63 apartment units available to anyone over the age of 62 who fit within a low-income demographic. Apartments include a living room, kitchen, bedroom and emergency pull cords for its residents.

“This was a ground up project and this was us responding to a request,” Wagner said. “The school had become vacant. There were community leaders within the neighborhood who said ‘What can we do with this asset?’ Serving seniors both within our city and within our state is so necessary right now.”

Councilman Bobby Henon said that the excitement from proposed plan stemmed from both the positive use of space while addressing the number of issues it posed in the community.

“It was also an issue of solving blight,” Henon said. “It invited crime which has been reported, break-ins, drug deals and all kinds of various illegal activity which was taking place there. It was an eyesore and it was sitting there for some time and here you have a proposal for a good positive use.” 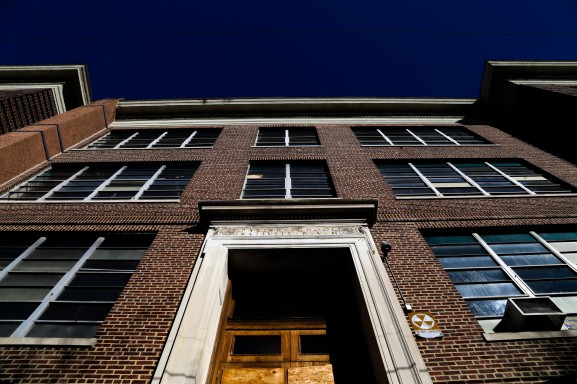 The senior housing, slated to be called Nativity B.V.M. Place, was held up by a lawsuit filed against the city by Port Richmond resident Gloria Marshall, represented by her son Jon Marshall. She believed the senior home would cause a number of immediate problems to the neighborhood.

According to court documents, Marshall argued that the church had artificially created hardships by closing down the school, rather than raising tuition. He claimed the increase in traffic “would provide more congestion to the neighborhood in terms of parking and traffic.”

After Marshall won the appeal in  2011, Wagner reached out to Port Richmond on Patrol and Civic Association President Ken Paul to file an amicus brief on behalf of the CHS.

The higher courts granted Paul and his committee the second chance.

“The things he was saying just made no sense, they were falling on deaf ears,” Paul said. “They had the meetings downtown and the judge dismantled this poor gentlemen. They overturned it and the next thing you know we they are proceeding and doing the building on it.”

Meeting the requirements as an exempt organization under regulation 501(c)(3), the community home will not be affected if the parish is lost due to the archdiocese’s parish review. Following the prerequisite, the housing unit will receive its funding from individuals, companies and public charities as a nonprofit charitable organization.

This allows the federal funding of $11 million to be tax exempt.

However, this awarded money comes with a stipulation. According to the footnotes in Marshall v. City of Philadelphia, The U.S. Department of Housing and Urban Development’s will “finance the construction, rehabilitation or acquisition … of structures that will serve as supportive housing for very low-income elderly persons for at least 40 years.” 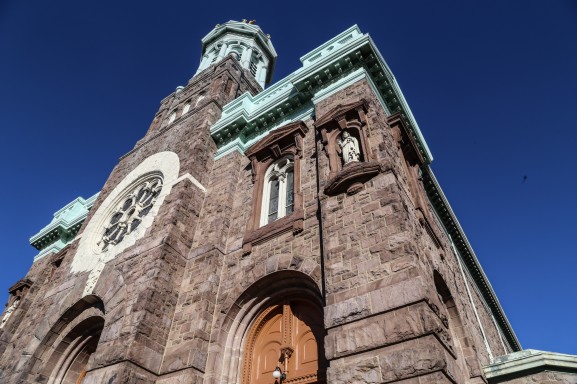 Wagner believes that well-designed housing for seniors is important to all parties involved.

“I think it was important to the people in this community because have a sense of place and belonging to this neighborhood and i think that this building is one of those places that they hold dear,” Wagner said. “More importantly, and I think the neighborhood recognized this, that this kind of development not only fulfills our mission to seniors but that it has a stabilizing effect on whole surrounding neighborhood.”

In late 2014 it was announced that the archdiocese would be conducting a review process of five Catholic churches in the Port Richmond community, St. Adalbert, St. George, Mother of Divine Grace, Nativity B.V.M and Our Lady Help of Christians. The process looked at factors including mass attendance, infrastructure strength and number of weddings held. A final decision will be decided by May 2015 whether or not the parishes will be closed, merged, or remain the same based on their determined level of sustainability .

Nativity B.V.M’s school was closed for good after a review of the Catholic school’s in the area deemed it financially unsustainable, despite support from rallying students, families and faculty.

The Archdiocese of Philadelphia’s 2013 report of the regional school in the parish, in which Nativity B.V.M was consolidated, reported a continued steady decline in student enrollment. Enrolled students dropped from 90 percent of capacity filled to 56 percent between 2008 to 2013.

It reached an record low 48 percent just two years ago. 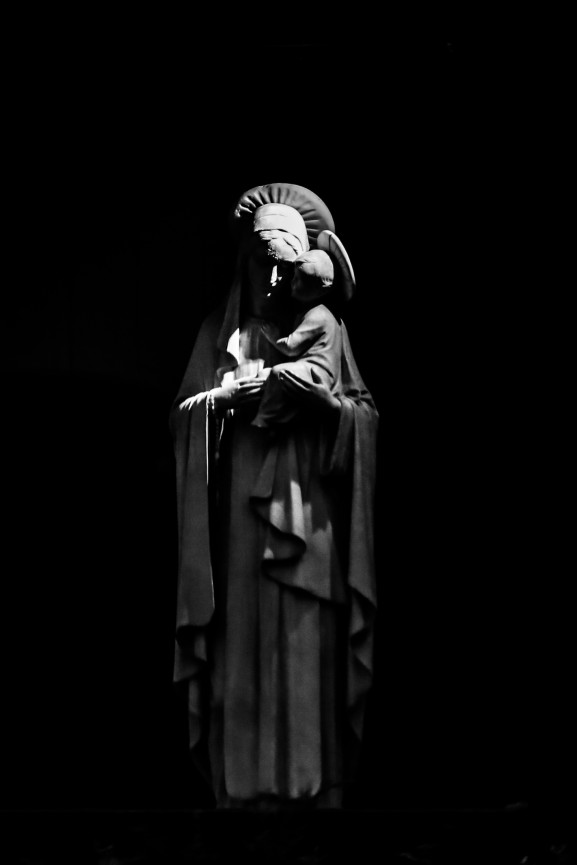 Former Pastor of Nativity B.V.M. Anthony Orth reflected on the transitioning atmosphere of the school. At one point the school enrolled nearly a thousand students, a number that was whittled down to two hundred shortly before being closed and dispersed.

“It’s a sad occasion, however it got financially untenable to keep the school going as the enrollment kept going down and tuition was going up,” said Orth who was in favor of consolidation, citing the close proximity and familiarity between parishes in the community.

According to Orth, the closely-knit atmosphere within the community of Port Richmond as well as the sheer number of parishes ranging in a variety of national backgrounds, was once a strength but is no longer sustainable.  Nativities B.V.M was known as being an Irish church and across the street, Our Lady Help of Christians is a german parish.

“That was fine back in the day [having individual nationalities of churches] but now you just don’t have the priests or the numbers to sustain that,” said Orth.

According to numbers provided by the Archdioceses of Philadelphia’s website, the ratio of registered Catholic’s for every priest in Pastoral Planning Area 570 has steadily risen from 1417 to 1 in 2009 and 1988 to 1 in 2013.  Average weekend church attendance in Port Richmond has steadily declined from 3,141 people in 2009 to 2,452 in 2013.

These numbers represent a trend among almost every region in Philadelphia.

“The reason we are doing it is we just don’t have the priests to staff the parishes. Nativities situation, financially it’s in debt,” Orth said. “The number of people attending is going down and the neighborhood is aging, so on and so forth, it faces a lot of difficulties.”

Closing a church means leaving a vacant property behind which can pose problems for the communities much like the Nativity B.V.M school structure did.  With the future of the Port Richmond parishes up in the air the question of how to utilize the blighted buildings rises for community leaders.

“There are only certain types of uses that make sense right in the middle of a community like that.  It’s not going to be a whole lot of commercial or retail or anything like that and we have a need in the city with an aging infrastructure,” said Councilman Bobby Henon. “This is something that communities should be aware of right now and communities should be planning on if a parish or church or school does close.”

Pastor Orth also echoed the importance of community involvement in matters concerning church closings and argued that the church needs to play a stronger role in the communities. 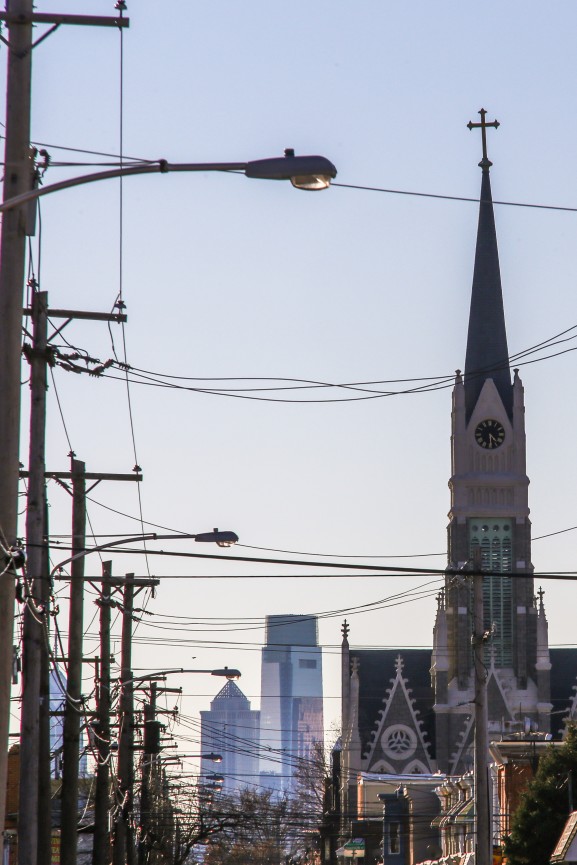 “I guess for the whole church I think we have to be more community oriented and realizing it’s not the way it used to be … How to make that transition, how to offer to people a place where they can celebrate their faith, I think it has to be very community orientated.” Orth added. “I think [the community] has to be more involved and I think they have to experience their faith.”

What experiences lay ahead for the Catholic community residing in Port Richmond is unclear and will remain that way until the review board announces their decision.  While churches may close their doors for good, Nativity B.V.M Place may be finally opening its own for the very first time.

“The idea, from a religious point of view,” said Orth. “Something has to die in order for something to live.”

– Text, images and videos by Patrick McCarthy and Andrew Thayer.

Friday afternoons at St. Anne’s Senior Community Center are never a bore. The weekly Clay Creations class, taught by Anne Koszalka, highlights many seniors’ weeks and gives them something to look forward to on Fridays. [continue reading…]

A new 92,000-square-foot Wal-Mart will officially open its doors today at the Aramingo Crossings Shopping Center at 2200 Wheatsheaf Lane, bringing an estimated 300 jobs to the area. To welcome the new employees a preview ceremony [continue reading…]

Port Richmond: This Week In The News – Marijuana Dispensaries, Street Racing And Theft In The Neighborhood

In case you missed in, we found a few places where people are talking about things happening in Port Richmond: State awards one marijuana dispensary in Fishtown, two in Northeast – Pennsylvania Department of Health [continue reading…]