La Pearl Beauty Emporium, located on the corner of 39th and Lancaster Avenue, is making strides to serve the West Philadelphia community. The salon, which opened its doors on Lancaster Avenue in 1996, recently held a “free hair day” for homeless men and women in the area. 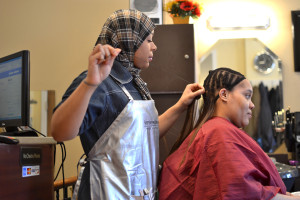 La Pearl was open from 9 a.m. to 4 p.m. for walk-in appointments only, for all services, which were completely free. In addition to owner Pearl Bailey-Anderson and her daughter Knekeya Anderson, 14 other local barbers and stylists came to donate their time. The salon also received food donations from local businesses, including Fresh Donuts, Chris’s Pizza and Powelton Pizza.

Anderson said the day was so successful, serving more than 70 people during the event, that she is already beginning to plan her next free hair day around the Easter holiday in April. The upcoming event will be geared toward homeless single women, whom Anderson feels are often overlooked.

“If you don’t have children, if you’re not a male, then you’re not being served as quickly or efficiently as a man or a woman with children,” said Anderson. 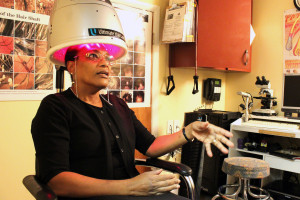 Knekeya Anderson said she will not be satisfied until they have been able to help 100 people.

When La Pearl isn’t holding free hair services, the salon caters toward women with various scalp and hair conditions resulting in thinning or balding hair. Anderson, a trichologist, consults with her clients to seek out reasons for hair loss starting at the scalp. With the use of microscopes and cameras, she examines the hair shafts to determine what may be causing a client to lose hair. 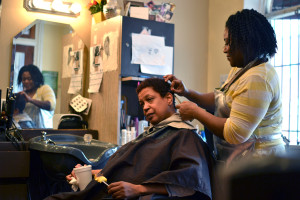 In some cases, she will use laser treatments, specialized shampoos and conditioners to treat the scalp. Additionally, she gives personalized consultations, instructing her clients on dietary and lifestyle changes to help regrow their hair. If regrowth is not possible, Anderson makes her own hair pieces for her clients.

Patricia Jarrett-Franklin, who has been a client of La Pearl for 15 years said she has been using Anderson’s service to grow and maintain healthier hair.

“When I walked in the door, I had no idea that was what I was stepping into,” Franklin said. “With so many salons, you just go get your hair done. This was an entirely different experience for me.”

– Text and Images by Katelynn Luczkow and Milena Corredor.

Lancaster Mews, a row of apartments and businesses on the 3600 block of Lancaster Avenue will keep its 19th century architecture after a city commission ruled on its importance. Last month, sites around the city were […]

From a rural area in Manchester Parish, Jamaica to the bustling hustle of Lancaster Avenue in West Philadelphia, the Williams family is well known for making authentic and savory Jamaican cuisine. “We were the family […]

Many organizations in Philadelphia serve a very specific niche. With more than 22 years of service, the Philadelphia Veterans Comfort House hopes to give homeless veterans a chance to start over and become productive members […]