Mixed martial arts, particularly under the Ultimate Fighting Championship banner, is one of the world’s fastest growing sports.

Thanks to the sport’s rise in popularity, people have begun to take notice of the techniques that go into defining the fighting style of a mixed martial artist.

The Muay Thai striking style has become especially popular as a striking base, particularly for its no-nonsense approach that is laced in ruthless aggression.

As opposed to a sport like boxing – where hands are the only legal form of combat – hands, legs, knees and elbows are all tools a Muay Thai fighter can utilize in a fight.

One Philadelphia gym has taken the basics of Muay Thai and implemented them into a style its fighters employ every time they go to battle.

Tung Pham, along with his brother Tuan, is the co-founder and head trainer of Fight Firm MMA, located in Northern Liberties. Under Pham, the school’s fighters went 11-1 in Muay Thai competitions within Fight Firm’s first year of operation.

“The traditional American kickboxer kicks sideways,” Pham said. “They are more focused on fighting that game of timing and distancing, whereas Muay Thai guys just come at you toe to toe and bring the fight to you.” 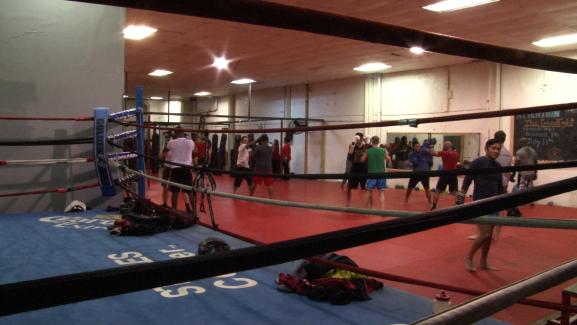 In addition to achieving an earnest record in Muay Thai competitions, Fight Firm is also the home to ex-UFC and current Bellator fighter Nah-Shon Burrell. The 25-year-old welterweight, who holds a record of 11-5 as a professional, has used Muay Thai to help him to seven knockout victories.

In addition to Burrell, Pham also trains upstart amateur fighter Devon Williams. Williams, 21, will look to turn pro in October, and believes that training in Muay Thai has helped him just as much mentally as physically.

“We have what I’d call a ‘no feel out process’ style,” Williams said. “One thing I’ve learned is there’s two responses: the fight or flight response. You either come forward or you go backwards. When you bring the fight to someone, it triggers that response immediately.”

Muay Thai was not always a go-to style for mixed martial artists. Back in the UFC’s pre-Zuffa days, most fighters were one-dimensional, being either a “wrestler,” a “boxer” or a “shoot fighter.” That is not the case today, as many fighters like Williams are always looking for ways to mix up their approach and take the best aspects of every style and focusing them towards creating a blended style of fighting.

Still, Williams is well aware of Muay Thai’s appeal and takes full advantage of the things Muay Thai allows him to do.

“I think Muay Thai has become the more popular style because of its utility,” Williams said. “Muay Thai focuses on more of the eight points of striking, which is two hands, two knees, two elbows, two feet. But all the styles have their uses.”

Another appealing aspect of the Muay Thai style is the opportunity for fighters to use their bones as weapons.

“In Muay Thai, you’re punching and kicking, you’re elbowing and kneeing,” Pham said. “Any sport where you’re wearing gloves and you get to the hardest parts of your body, your elbows and knees, and you get to hit them and it’s legal, of course that’s going to be a benefit.” 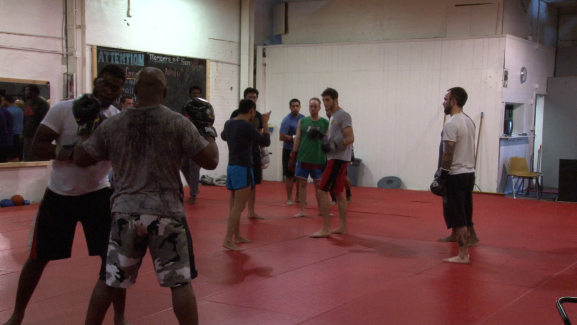 Muay Thai’s appeal to American martial artists did not rise until fairly recently.

Kevin Ware, a local practitioner, credits the rise of Muay Thai in American mixed martial arts to the first Rich Franklin-Anderson Silva fight in the UFC on Oct. 14, 2006.

Franklin, the world champion at the time, entered the fight with a record of 22-1 and had not lost in nearly three years. Silva, while popular in both Japan and his native Brazil, had not yet been fully exposed to American fans.

“Franklin was dismantled by Anderson’s plum Thai clinch in the very first round, delivering some of the most vicious knees seen at the time,” Ware said. “This was also Silva’s second fight in the UFC, and only hardcore fans had previously seen Silva’s vicious MMA Muay Thai, which many have since adapted into their training regimen.”

At its core, Muay Thai is a style of striking that succeeds or fails based on the confidence and killer instinct of the fighter.

As the primary instructor at Fight Firm, Pham is making sure that his fighters have the wherewithal mentally in order to get the most out of their Muay Thai.

The Old Academy Players have been situated on Indian Queen Lane for 91 years as of this year, and have put on performances from lesser-known playwrights to the Bard himself.  They are getting ready to [continue reading…]

Mantua: One Year Later, Community Wonders if Promise Will Be Kept

The White House designated part of West Philadelphia as one of five Promise Zones one year ago this January. The designation will last for another nine years, but while most organizations involved look positively on the first [continue reading…]

Philadelphia is finally hopping aboard the bike share train. Residents and tourists can look forward to more than 60 bike share stations that will begin to blossom all across the city this spring. Sponsored by [continue reading…]