After lunch is finished on Thursday every week, guests at Broad Street Ministry (BSM) begin to make their way downstairs. Immediately, the stations to collect personal care items and mail are swamped.

The slowest station to fill up is a large table in the center of the room covered in paints, brushes, pastels and nearly any other art supply imaginable. This is the Therapeutic Arts table, available to guests every Thursday from 11:30 a.m.-3 p.m. 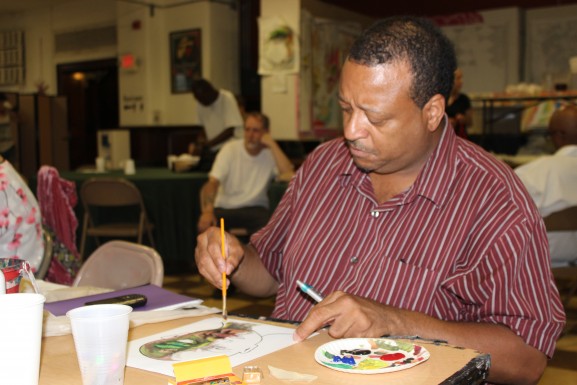 “I like detailed pen and ink,” said Jibril Bey (pictured above), a regular at the arts table since February. “But when I get colors, I can really expand and get creative.”

A 1984 graduate from Hussian Art College, Bey taught art to adults and children for years before experiencing family troubles that led to him living in a shelter and going through what he calls a “creative slump.” That was until he came downstairs after one of the meals and found the arts table.

“I was able to get creative again,” Bey said. “I got everything off my chest when I went to the shelter. Then, I began to come to the art table and get inspired by the younger artists.”

While causes for homelessness vary, poverty is an obvious key contributor. According to the U.S. Census Bureau, 26.9 percent of Philadelphians were living below the poverty line in 2012. While this was a slight improvement from 2011, it still means that Philadelphia has one of the highest poverty ratings compared to other major cities in the United States.

To make matters worse, many homeless people suffer from mental illness or deal with complications from controlled substance abuse. According to a 2011 report from the Substance Abuse and Mental Health Services Administration (SAMHSA), more than 26 percent of sheltered homeless in 2010 suffered from some type of mental illness.

In addition to being a calm space in the middle of the room, the arts table at BSM also serves to help those guests with mental illness. However, according to Brenna McGinnis, the facilitator of Transformative Art, her and the volunteers at BSM aren’t tackling specific issues.

“We are doing therapeutic art, not art therapy,” said McGinnis. “The goal of making the art is not to get to a place where this person is helped by expressing one certain thing, which might be a goal of therapy sessions. Really, if somebody is creating something, that’s a success.”

Each week, McGinnis or a member of the BSM team present a specific project for the table. Sometimes, the projects are design oriented and give guests the opportunity to be creative without having to be emotionally expressive, like simply drawing with tape and painting over it. Other projects can allow guests to be more reflective, and ultimately open up with the staff.

McGinnis spoke of a project in which guests were encouraged to create a self-portrait, but with one half of the face representing what people see on the outside and the other half representing their emotions or self-perception. 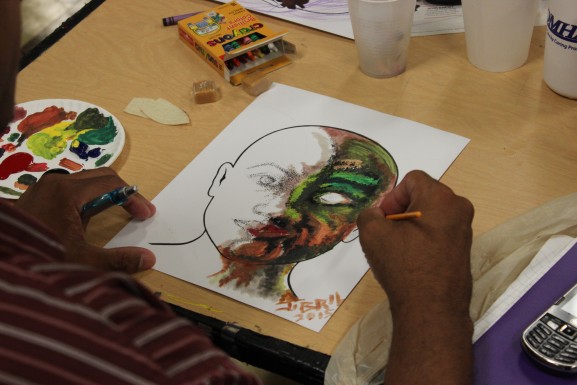 “That was a huge success,” said McGinnis. “People took the opportunity to really share things that were going on with them and to be honest. Drawing symbols like, ‘Well, sometimes I feel sad,’ and drawing teardrops under the eye. It seems simple, but people aren’t always comfortable expressing that.”

While approximately 4,600 unduplicated guests visited BSM in 2014, only 12 percent of those guests participated in the art table. However, many of those who do decide to join the table become regulars.

“I come every week. If I don’t, she’ll (McGinnis) get me,” Bey said with a big smile and side-eyed glance towards McGinnis. “She’s got a compassion for people.” 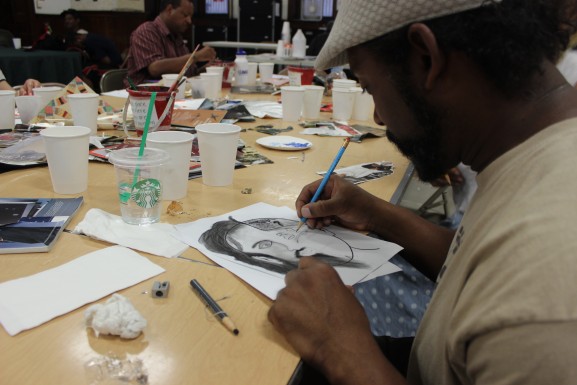 Another of the weekly regulars is John Greene (pictured above), a Temple University alumnus and former member of the fencing team, who admits he had zero previous artistic experience. Greene taught ESL students for 15 years before resigning for his pension in 2011, and ultimately having problems with a girlfriend dealing with substance abuse. He says she falsely accused him of a crime and on the day he turned himself in, his father passed away.

“The story I’m telling you is one of many,” Greene said. “And the exceptional volunteers here take the time to learn all of the backstories. They come from all over, and that’s what is truly inspiring.”

Greene said that while he hasn’t spoken to his ex-girlfriend since she left Philadelphia, he still loves her and deals with pain from that. The art table helps, and he’s even redrawn pieces because of his growth.

“Every time it eats at me, I come to the table and forget about it,” Green said. “I can exhale.”

Greene spoke with great pride of a University of the Arts thesis student who showcased some of the guests’ work, including a few of his pieces.

“It made me feel proud to show off my trouble,” Greene said, looking up from his current project to make sure his message was clear. “A lot of my old friends came and saw it, and a lot of people came and made fun of it. But, everyday I don’t do something violent I’m clean. I’ve learned to block those people out.”

One of the reasons for the low turnout at the art table is the distribution of gender. Approximately 84 percent of the guests at BSM are male.

However, BSM is creatively providing other options to encourage female guests to create with their hands and embrace the calming nature of therapeutic arts. Knitting Club has met every Monday morning for the past two months.

“Many of these women have been shut down by men in the past, so the arts table can be intimidating,” said Jotie Mondair (pictured below, right of Greene), one of the regular volunteers. “We wanted to have something for them to feel comfortable too.” 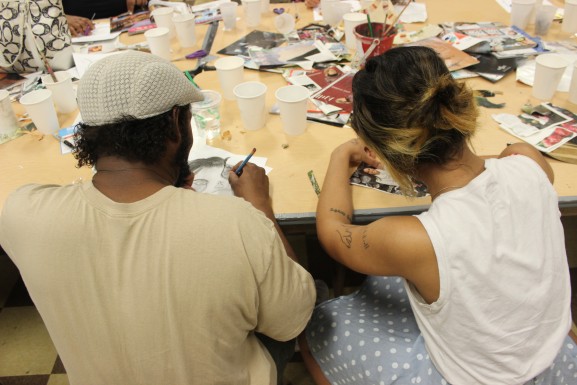 Both Greene and Bey are two of the last people at the table as 3 o’clock approaches. After working until the last possible minute, they help clean up the supplies and plan on finishing their projects next week.

“It’s three hours every week I wouldn’t give back,” Greene said. 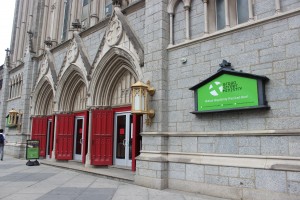 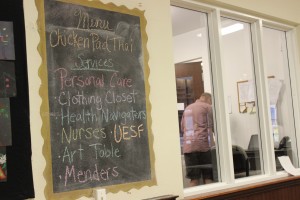 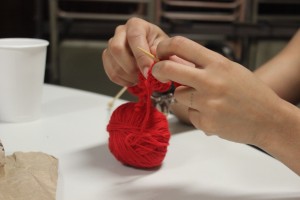 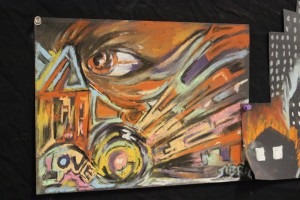 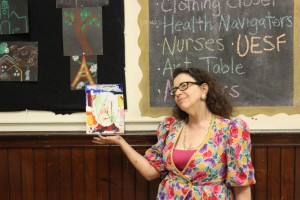 Media coverage in Fairhill tends to be of a negative nature, usually focusing on crime. In order to provide a better understanding of this unique and culturally diverse community, here are five things you might not [continue reading…]

South Philadelphia: Homeless People Are Struggling To Survive In The City

A man dressed in dirty, oversized clothes goes to various corners in South Philadelphia every day with a sign that reads ‘homeless and hungry.’ He nods and waves to the cars who just pass him [continue reading…]