La Pupuseria is a new food truck that is imprinting the culture of El Salvador on the people of Olney one pupusa at a time. Located just north of Duncannon Avenue on North 5th Street, La Pupuseria is serving up both Hispanic and American favorites with a little unique flavor from Central America’s smallest country.

So, what is a pupusa exactly? A pupusa is a corn flour tortilla which is heated on a stove combined with either cheese or a combination of meat and cheese. The dish is typically served with chicken and cheese, although La Pupuseria does offer it with beans and cheese or steak and cheese. It may sound similar to many other Hispanic dishes but the corn tortilla is thicker and more dough-like than other tortillas. 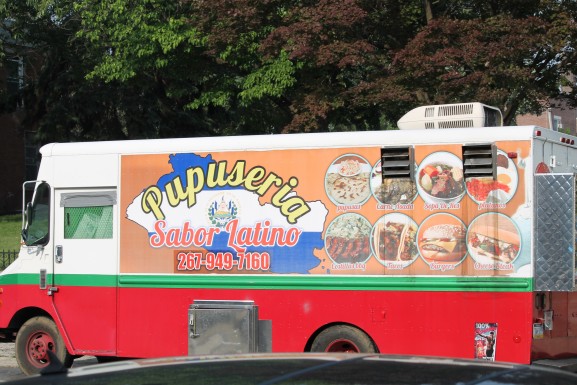 La Pupuseria’s partial owner and manager Elisseth Maya could easily explain what a pupusa is but she would rather have her customers just taste one and find out. Maya, originally from San Miguel, El Salvador, has been working almost everyday since La Pupuseria opened in early March 2014.

Her passion for cooking is the thing that has kept her on a fast pace ever since the truck opened.

“I like everything about cooking,” said Maya. “I have been doing it ever since I was a little girl when my mom started to teach me. My whole family cooks – my mom and all my sisters.”

Before moving to Philadelphia, Maya lived in Maryland, where her sister also operates a food truck. While working side-by-side with her sister for two years, Maya started to make a plan to open her own food truck. Maya was also helped by her mother, who also owns and runs a food truck in Washington D.C.

While El Salvador may not be the most recognizable country out of the seven countries that make up Central America, Maya is hoping to make up for what El Salvador may lack in size with flavor.

“I hope when people try my food they like it,” said Maya. “This is the food of my home and many people do not know about El Salvador or pupusa.” 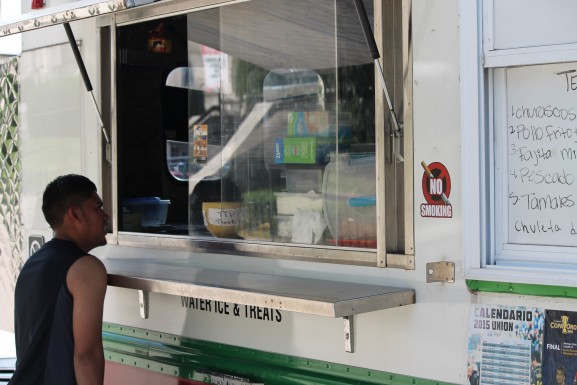 If someone were to ask you what country comes to your mind when you think about Hispanic food in the Centro de Oro corridor of 5th Street, your answer is not necessarily going to be El Salvador. Why would it be?

The stores and homes that line the 5th Street corridor are dominated by the presence of Puerto Rican and Mexican flags. They occupy the north side of Roosevelt Boulevard upward through Godfrey Avenue. With all the red and green there doesn’t seem like there’s room for the blue and white of Central America’s smallest country.

Being overlooked is a subject that is on the mind of Elisseth Maya. When deciding where to park the food truck, a lot more planning went into it than one would think. While the mobility of a food truck can be seen as a positive, constant relocating could hinder a food truck’s ability to develop a loyal following.

Maya recognized the importance of customer loyalty and decided to choose a location that La Pupuseria could settle and stay more permanently. 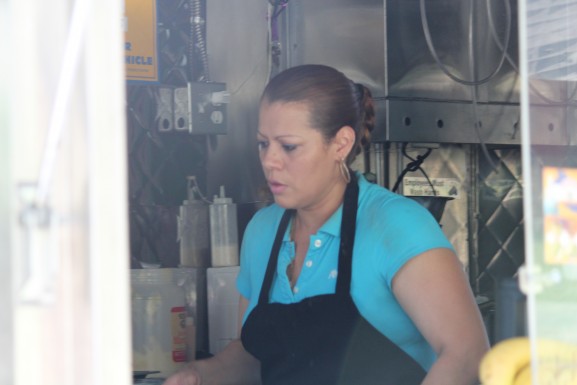 While Maya knew there were a lot of Hispanics living near where she parked she probably doesn’t really know just how good of a spot she chose.

La Pupuseria has the unique twist on the familiar flavors of Hispanic cuisine. It has the right exposure in the heart of Olney. It has found its sweet spot amongst a densely Hispanic population. Now it just needs hungry stomachs to complete their mission.

– Text and images by Clayton Hoffstein.

The final Night Market of the year hit Chinatown last Thursday, with more than 60 of the city’s food trucks along with live music and traditional Chinese dances. The Food Trust organized the first Night Market [Read More]

“Want more hot sauce?” Nestor Morales asked. “The green one is really hot.” Morales, a repeat customer, ate his chicken tacos from the metal ledge built along the side of the Taco Loco food truck [Read More]