Students at Saint Joseph’s University were hoping at best to catch a glimpse of Pope Francis as his motorcade traveled down City Avenue. Many students were planning to gather together to watch the festivities on television.

“They’re going to watch him make a speech or something like that,” said Dimetri Williams, a Saint Joseph’s University student. “He’s only like five minutes away from our campus, so I’m not really sure if we are going to be involved.”

What Williams and the rest of the Saint Joe’s community did not know was that Pope Francis was going to make an unscheduled stop at the university.

Students were given a hint on Sunday when the university’s official twitter account sent out a message: “We’ve received confirmation: @Pontifex will be visiting campus this afternoon. Please heed security direction from the Secret Service.”

The pope did not have to travel far to get to the university located in Overbrook. He stayed a few minutes away at St. Charles Borromeo Seminary for his two-day visit to Philadelphia.

At a press briefing, the Rev. Federico Lombardi announced that Pope Francis would be seeing the “Synagoga and Ecclesia In Our Time” statue on Saint Joe’s campus. The statue is a new addition on the school’s campus and, according to Saint Joe’s website, it symbolizes the relationship between the Catholic and Jewish faiths.

Students gathered to get a glimpse of the pope as he walked through their campus. As the motorcade made its way onto the campus, students erupted with cheers and tried to get pictures of Pope Francis. Images of the pope were being tweeted out by the second.

This weekend may be Pope Francis’ first papal visit to Philadelphia but it is not the first time Joe Miele saw a pope in Overbrook.

“In 1979, we saw Pope John Paul II and he turned up this street at about 7 o’clock going to the seminary coming from downtown, like the new pope is going to do,” Miele said. “When he turned up, it was just starting to fade into darkness and it brings me to tears, when I think about this.”

Miele is hopeful that Pope Francis will bring change to the world.

“So I’m glad he’s coming, and hopefully he’ll bring some joy and some solutions to all of the problems we have in this world,” said Miele.

The Philadelphia Convention and Visitors Bureau estimates that the papal visit will bring more than $400 million to the city.

Local store owners in Overbrook are hoping that large numbers of  visitors come to greet Pope Francis at St. Charles Seminary and patronize their stores. 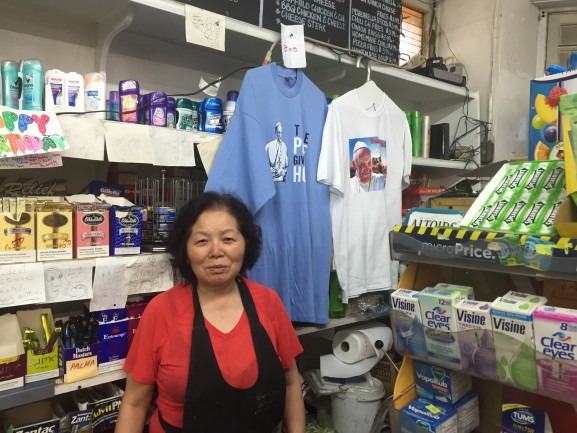 Kimmey Moon of the Food Market is selling T-shirts with the pope’s image. Moon said she hopes to sell a couple dozen.

The papal visit also presents some challenges to residents of Overbrook.

With several roadways sectioned off, people aren’t able to get to their jobs that they depend on to make a living.

Curvus Pierre doesn’t feel as though the pope’s visit has any positive impact for him personally and on the city.

“What’s going to benefit me if the pope comes?” Pierre said. “They close down the whole city, the kids can’t go to school. It is a good thing that he is the pope, but shutting down the whole city? When the president of the United States comes they don’t do that.”

Because his kids aren’t able to go to school because of the school closings, Pierre said he isn’t able to provide for his family as he has to take care of them at home instead of at work.

Jerome Shabazz opened the Environmental & Arts Education Center in 2006. This was when he witnessed the positive effect hands-on experiences had on students of the Overbrook community. Interacting first with the school district, Shabazz [continue reading…]

Fashion: How the Upcoming Mayor Can Improve Fashion in Philadelphia

“I would love the upcoming mayor to be just as engaged and involved if not more, to drive the message home that art, design and made in Philly creativity is crucial to the growth of [continue reading…]

People’s Emergency Center, or PEC, has been a helping hand to the community for many years. Most known for its abundance of programs for helping families, PEC has now taken on small businesses. The dedicated staff provides [continue reading…]