The Rev. Stephen Thorne began Mass at Saint Martin de Porres Catholic Church Sunday, by asking the congregation to move up to the first few pews. Hesitantly, people rose and moved closer to the front.

“Thank you for listening to your pastor,” Thorne said as the crowd laughed. 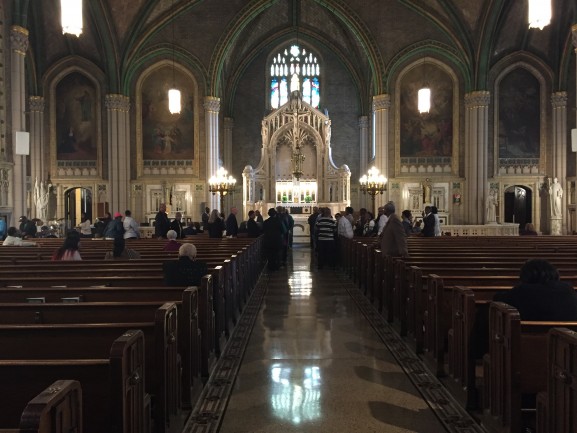 About half of the regular churchgoers were missing due to transportation problems and the papal activities. Typically, there are about 250 to 300 people in attendance. Thorne, who has served as pastor of the church since June 2011, also gave his staff the week off so they could attend the World Meeting of Families and watch the pope on TV. However, he did not cancel their regularly scheduled Sunday Mass.

“Mass is never canceled,” Thorne said. “Sunday worship is what we do every week.”

This week, Saint Martin de Porres Catholic Church welcomed Pope Francis. The front of their newsletter had a picture of Pope Francis waving and smiling with the text “Welcome Pope Francis!” beneath it. The sign outside of the church read “North Philly Welcomes Pope Francis.”

Thorne’s homily was also influenced by the pope’s visit. He talked about how Pope Francis keeps moving despite the fact that he’s almost 79-years-old.

“I complain about my feet and back and I’m 46!” Thorne said. “This is a blessed man.” The crowd applauded in agreement.

Thorne also mentioned that he believes Pope Francis enjoys being with “ordinary people” because of the life he had in Argentina.

“If it were up to him, he would be right here at Saint Martin de Porres Catholic Church,” Thorne said as the crowd clapped and cheered. 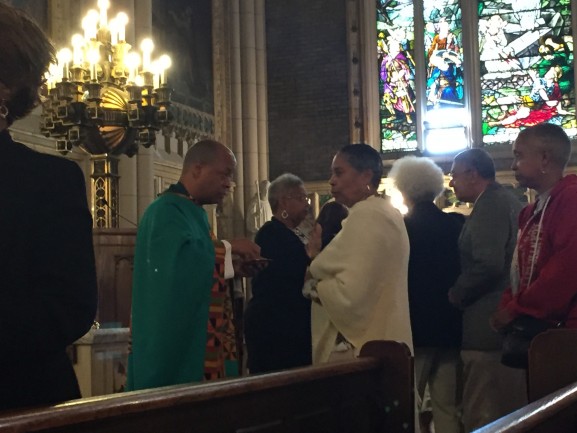 The main point of Thorne’s homily was one of Pope Francis’ key themes: encounter.

“That’s what it means to truly be a part of the Christian community, encountering each other,” Thorne said.

He spoke about how people have lost human connection. To Thorne, just because you have a lot of friends on social media doesn’t mean they are actually your friends in real life. What is needed to build and improve a relationship is face to face interaction.

“If I look into your eyes, I can see your soul,” Thorne said.

He walked down the aisle and scanned the pews to make eye contact with everyone. When he walked back to front, he put his face directly in front of a woman to make his point.

Thorne pointed out that Pope Francis always looks at people, which means he knows how to encounter them.

He also said Pope Francis is teaching us a good lesson about what God intended humanity to do.

“He’s teaching us that we need to work together,” Thorne said. “Republicans, Democrats, English speakers, Spanish speakers. I need you and you need me.” After he spoke, a great applause filled the church.

Members of the congregation were touched by the homily’s message.

“I think it was dead on,” Kevin Gray, member of the Pastoral Council of Saint Martin de Porres Catholic Church, said. “Pope Francis has realized that there needs to be changes made.” 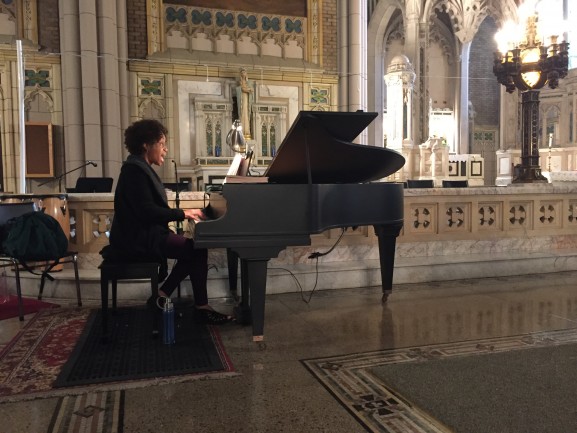 Sonya Songhai, the fill-in pianist for the church, pictured above, thinks it is true that people rely more on technology then face-to-face interactions today.

“We tend to check our technology before we will talk to someone and when you do that you don’t really get a true picture of what’s going on with that person,” Songhai said. “The text words really just don’t convey the same heartfelt feeling that you would have encountering and speaking with someone and looking in their face. I purposely left my phone in the car because I didn’t want to pick it up and I’m going to make an effort not to pick up and start looking.”

Even after Pope Francis leaves, Thorne plans to continue highlighting the pope’s speaking points in his preaching.

“The pope’s got to go home, but we’re still here,” Thorne said.

– Text and images by Noe Garcia and Avory Brookins

The Cunningham Piano Company donated a digital organ for the Papal services that concluded yesterday with Pope Francis leading a mass on the Benjamin Franklin Parkway.  “I’m a musician, and, of course, I’m a business [Read More]

In celebration of Pope Francis’ arrival in Philadelphia for the World Meeting of Families, approximately 3,000 Vietnamese Roman Catholics gathered at Cardinal Dougherty High School to celebrate. “That’s not a church,” objected one child as [Read More]

Pope Francis ended his inaugural visit to the United States of America, celebrating multiple masses and public events as part of the World Meeting of Families.  One of the primary issues the Pontiff focused on during [Read More]