A church in Point Breeze set out to host more of a homecoming than a formal visit for a group of pilgrims traveling from Alabama to see Pope Francis in Philadelphia.

The Aquinas Center, part of the St. Thomas Aquinas Church at 17th and Morris streets in Point Breeze, hosted a group of 56 pilgrims during Pope Francis’ visit. The pilgrims are from the Archdiocese of Mobile, Alabama. Most of them are Spanish-speaking immigrants.

The center houses religious and educational groups in its dormitory-style quarters throughout the year. Funds from renting the space contribute to the center’s operating budget. For the weekend of Pope Francis’ visit, it was in high demand.

“We had 25 requests from all over the country,” said center director Bethany Welch. “We asked [the applicants] to describe who they are and what their circumstance is. Are they low-income? Are they people with resources? We decided that we wanted to support people who really didn’t have any other way to come see the Holy Father. These folks are predominantly people who are in agriculture or farm work, mostly undocumented. They’re leaving their jobs for the week and paying money to come up here. We figured we were probably their best option.”

The pope’s speech on immigration at Independence Hall was expected to be one of many events throughout the weekend that was meaningful for the pilgrims, as it was meant to speak to many of their own experiences with moving to the United States.

“This means a lot to me because I like the way the pope worries about the immigrants,” said visiting pilgrim Maria Colon. “I am an immigrant. I am from Peru. So when I came here, I suffered because I was undocumented, but it was my faith in God that helped me.”

Now married, Colon is a legal citizen who helps others with immigration issues.

“Our whole purpose here is to think about unity and diversity, and supporting learning and inspiring thoughtful action, particularly around immigrants and refugees,” said Welch. “Them having a safe place here is important to us. We have five language communities and 10 to 11 different ethnic groups. They’re all coming together for this celebration with the pilgrims.” 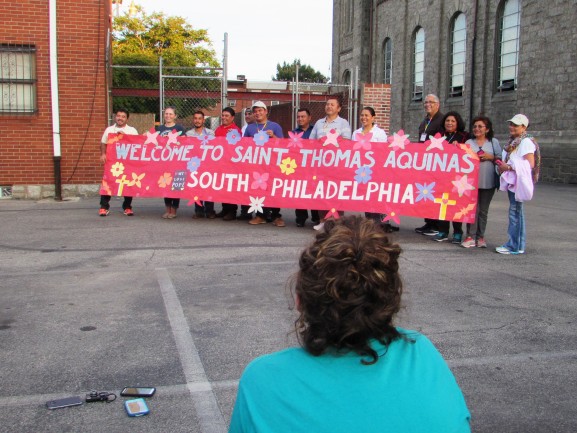 One new religious leader in the group hoped to gain more inspiration from Pope Francis after witnessing him give a speech and celebrating Mass.

“I was recently ordained and don’t see myself as a leader yet because I have a lot to learn,” said the Rev. Lino Oropeza of Our Lady Queen of Peace in Selma, Alabama. “I look to Pope Francis and how he follows the example of Christ, and how he believes that if you want to be first, you have to become last. If you want to be the greatest, you have to become the server of all the people.”

The group left Alabama in a bus at 10 a.m. on Wednesday morning and arrived late Thursday afternoon. Upon their arrival, the pilgrims were greeted with cupcakes, freshly made beds, toiletries and a dinner of posole – a Mexican dish typically reserved for special occasions.

Before sitting down to a welcoming speech from Welch, translated into Spanish by group leader Olga Viallar, some of the pilgrims played instruments and took pictures of one another on their first night in Philadelphia.

The pilgrims had some of the coveted tickets to see Pope Francis speak at Independence Hall on Saturday and the Papal Mass on the Benjamin Franklin Parkway on Sunday.

“I think what excites us the most is the great example that the Pope Francis is,” said Oropeza. “A good example, we had Pope Benedict before. He was a great pope. But you don’t see that charisma that Pope Francis has. I think that what excites and motivates people to follow him – that he is very active and very humble man.”

Oropeza and his fellow visitors planned to parade up to Independence Hall on Saturday along with 1,200 parishioners and community members from St. Thomas Aquinas. But, according to Welch, while the occasion is unusual, a parade of people coming from St. Aquinas is not a strange sight for Point Breeze.

“It’s not a big deal for us,” said Welch. “We do processions all year for different feast days and celebrations. [The parade for Our Lady of] Guadalupe goes right down 18th Street. And we’re actually not going to have mariachi or a brass band like we usually have for Guadalupe.”

– Text and images by Madeline Presland and Morgan Falconer

The plazas surrounding City Hall are enriched with iconic statues. From the 37-foot-tall monument of William Penn at the top of the building to the smaller statues scattered around the base of the structure, these [Read More]

With the 115th anniversary of the Hermann Henssler Locksmith came the repainting of its faded business sign at the corner of 13th and Cambridge streets. Fifth-generation locksmith John Henssler was in disbelief when a stranger in [Read More]

Alex Shraybman was more than 40-years old and in an established career when he decided to uproot his family from their home in Lviv, Ukraine, and make the trip to the United States in search [Read More]