Philadelphia is an undisputed creative hub and the city’s arts and entertainment scene is often synonymous with music, art and film. But tucked away in the Adrienne Theater on Sansom Street, players in the Philly Improv Theater (above) are helping revive a neglected art form and making comedy a part of the conversation.

As founder and executive director of the organization, Greg Maughan said the theater is there for people wishing to get a start in the business. Unlike other comedy clubs in the city, Maughan said the Philly Improv Theater, also known as PHIT, develops new performers instead of showcasing big names.

“Most of the stars on our stage each weekend are Philadelphians,” Maughan said.

While New York, Chicago and Los Angeles are considered the big three cities in comedy, PHIT is working to focus attention on Philly. Shows are easy to catch for comedy lovers, and the organization makes it easy for aspiring performers with classes for every level and a slew of house teams. On the rare fifth Saturday of the month, PHIT hosts a Double Rhonda event where company members combine randomly in two groups and each perform a 30-minute set. On Aug. 29, comedians (above) from various teams came together for one night to form the new improv team PYT. 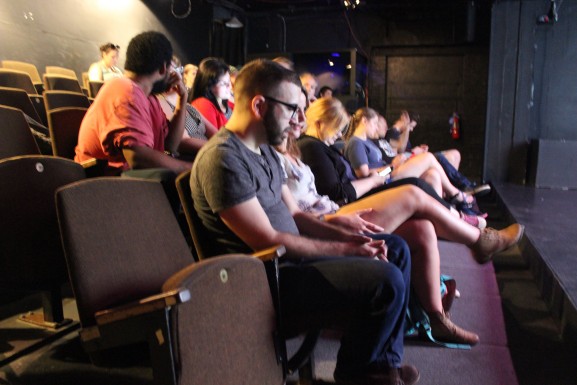 As an audience member at a PHIT show, don’t expect to simply sit back and watch. Players often start improv shows by asking the audience what they would like to see. With the intimate environment of the theater, it’s easy to feel as much a part of the show as the comedians themselves. Attendees in the front row (above) helped kick off the Double Rhonda Show by shouting out the key word “tomatoes.” 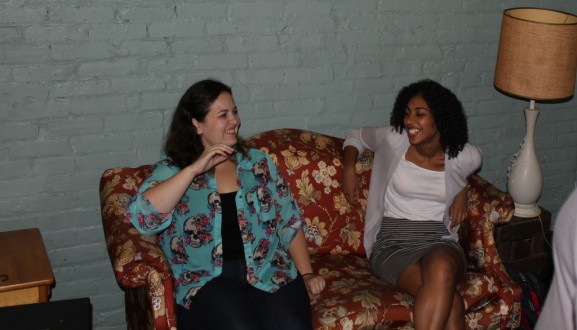 PHIT gives back to the community.

In addition to working with Philadelphia-based actors (above), PHIT helps promote local businesses with their 36-hour Black Friday Comedy Marathon that offers free passes to people showing proof of purchases from stores in the area. Coordinator of the Kids and Teens program Rachel Semigran said the theater invests in creativity and works to create a positive impact.

“They’re just the nicest people in the world to work with,” Semigran said. “I love improv and I get to impart that either through doing shows or teaching classes. I’m pretty darn lucky.” 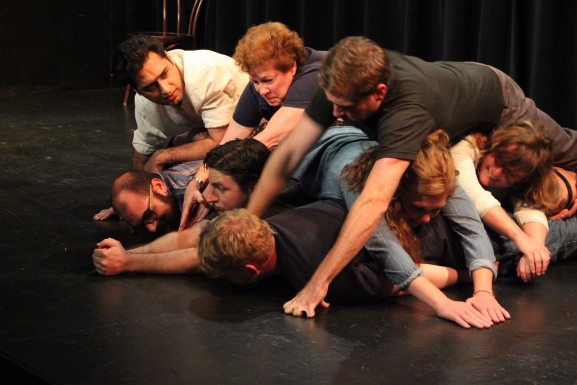 The most expensive ticket for a PHIT show is $12, the shows are BYOB and the hour-long performances are too quick and unpredictable to turn stale— especially when featuring a Human Jenga set (above).

“PHIT is cheap and fun,” said house manager Tom Hannigan. “It’s an appetizer for the night. You can always fit something in because there’s always something happening.” 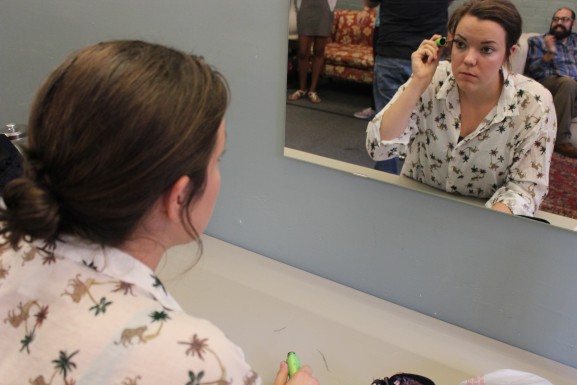 PHIT caters to all age groups with teams comprised of established comedians and beginning college students, but there’s no hierarchy among the teams. Molly Scullion (above), a 19-year-old featured player, said performing with PHIT is one big trust fall.

“You don’t have anything on that stage except for your teammates, but that feeling of complete trust in them makes it feel like the safest place in the world,” Scullion said. “Whether you are a new student or a company member, you walk into the lobby, the theater, or the office and immediately see faces you know and love.”

Wind howled and rain pelted down on East Falls, but inside the warm gymnasium at Thomas Mifflin Elementary School, smiling children ran around in colorful costumes to the sound of popular tunes put on by [continue reading…]

The Big Blue Marble Bookstore, located at 551 Carpenter Lane in West Mount Airy, is the place where a group of women meet monthly to discuss books about women. The Women of the World Book [continue reading…]