St. Hubert High School for Girls played its own part during the World Meeting of Families and the Pope’s historic visit. Among other contributions, St. Hubert’s helped paint tiles for “The Sacred Now: Faith and Family in the 21st Century” (above) at St. Malachy Catholic School’s new home in North Philadelphia, to honor the visit of Pope Francis to Philadelphia.

St. Hubert’s, located on 7320 Torresdale Ave. in Northeast Philadelphia, is the largest all-girls high school in Philadelphia and has been open since 1941. The students helped paint tiles with other select Catholic high schools in Philadelphia including Father Judge High School. Pope Francis added to the mural as well by adding his signature ‘Francis’ onto one of the panels on Saturday night at the Festival of Families. The finished mural is at St. Malachy’s new location at 1012 W. Thompson St. in North Philadelphia, with the official dedication taking place in November. 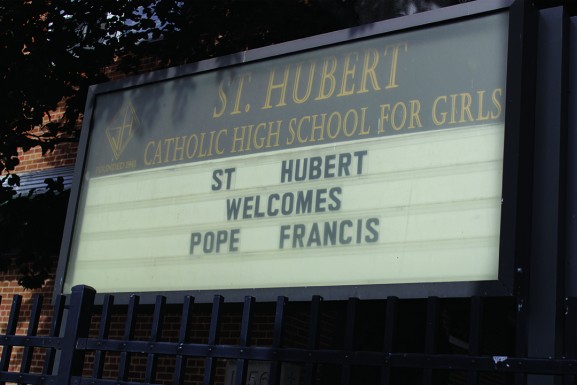 Not only did they celebrate the visit in the city, but also at the World Meeting of Families.

The principal of St. Hubert High School, Dr. Joanne Halls, chose six St. Hubert students from the Bell Choir to participate in the opening ceremony of the World Meeting of Families at the Pennsylvania Convention Center.

Dr. Halls (below) was more than happy to plan and take her students to events at the World Meeting of Families and to see Pope Francis. 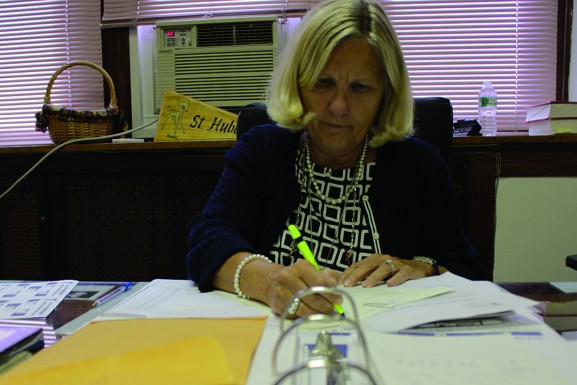 “A lot of people were complaining about the crowds,” Dr. Halls said. “I didn’t care. I waited in long lines at Disney World with a bunch of people. I can be in crowds for the Pope. This is a once in a lifetime experience.”

On Wednesday, a number of St. Hubert students went to the Pennsylvania Convention Center and volunteered at the Helping Hands event, a meal-packing affair to help fight hunger and strengthen people towards eliminating world poverty.

The principal felt the weekend’s events would be great for Philadelphia, but also for the entire Catholic school system in the United States.

“The Pope said he has to save the Catholic schools in America,” Dr. Halls said, referring to when the pope met with religious leaders in the beginning of the year. “We need to keep those schools open. That gave me a lot of hope that the Pope has us in his sight.”

“Just to know you’re loved by God and know he passes on that love,” Sister Fleming said in hopes for people to open their hearts up to God, believing the pope’s visit will affect people’s belief in God. “I think we forget.”

The counselor was also part of the pope’s visit, volunteering to help with the special education people.

“The main thing is I got to go to the mass on Saturday at the [Basilica of Saint Peter and Pauls] Cathedral and participate in the Festival of Families,” Sister Fleming said.

Having Pope Francis in Philadelphia this past weekend has affected the faithful..

“He just touches people’s hearts,” Sister Fleming said. “It’s an extraordinary experience for Philadelphia and for everybody.”

Dr. Halls has a deep faith that the Pope’s visit will be nothing but a positive experience.

“I do think he’s going to turn things around and people who didn’t necessarily feel welcome are going to feel welcomed and that’s going to be so important,” Dr. Halls said.